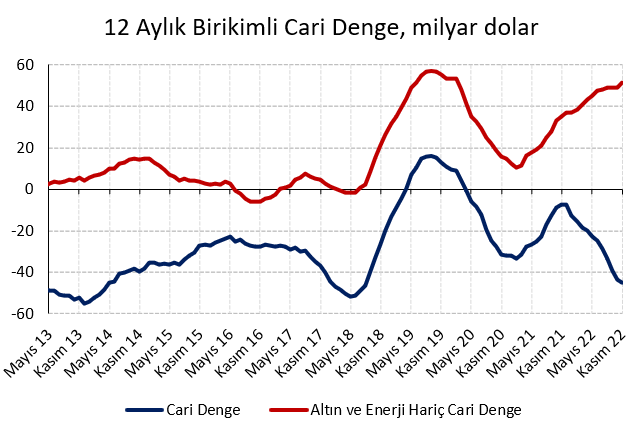 November’s balance of payments data show that reserves increased by $3.6 billion MoM, thanks to cash FX and deposit inflows to banks and stronger-than-expected foreign direct investment revenues. Despite the huge foreign trade shock and negative global backdrop, Central Bank’s (CBRT) FX reserves increased by $9.9 billion in the first eleven months of the year. Excluding swaps, the increase is $4.3 billion.

In November, current account deficit came in at $3.7 billion, below the market’s ($3.8 billion) and IS Investment’s ($4.1 billion) estimates. Current account surplus excluding gold and energy contracted by 5.3 billion dollars (October: 8.6 September: 6.9) compared to the record level in October. On a 12-month cumulative basis, the current account deficit rose from $43.4 billion to $45.0 billion, and the cumulative core current surplus (excluding gold and energy) rose from $50.0 billion to $51.3 billion.

The deviation in our current account balance forecast for November is due to record high foreign direct investment income. This item, which normally yields a deficit (net FDI outflows) of between 0.1 and 0.3 billion dollars, recorded a surplus of 0.5 billion dollars.

When we look at the sub-items of the current account balance, we see a services surplus of 3.7 billion dollars against a foreign trade deficit of 7.1 billion dollars and an income deficit of 0.2 billion dollars. Services continue to be strong thanks to tourism. The monthly gross foreign exchange inflows from tourism correspond to 146% of the pre-pandemic November 2019 level. This rate is 122% for the first eleven months of 2022. Rising incomes in the Middle East due  high energy prices and the refugees coming from Russia and Ukraine due to the war continue to affect tourism positively.

When we look at the borrowing side of loans, we see a net debt payment of 1.5 billion dollars by  banks and a net borrowing of 0.1 billion dollars in the corporate sector. When we look at bonds and loans together, there is a similar sectoral divergence. In November, long-term external debt rollover ratios were 58% for banks (January-November 56%) and 83% (January-November 2022, 179%) for non-financial companies. In the first eleven months of 2021, these rates were 84% for banks and 138% for companies.

We estimate a current account deficit of around 6.5 billion dollars in December

By Serhat Gürlenen, Research Director and