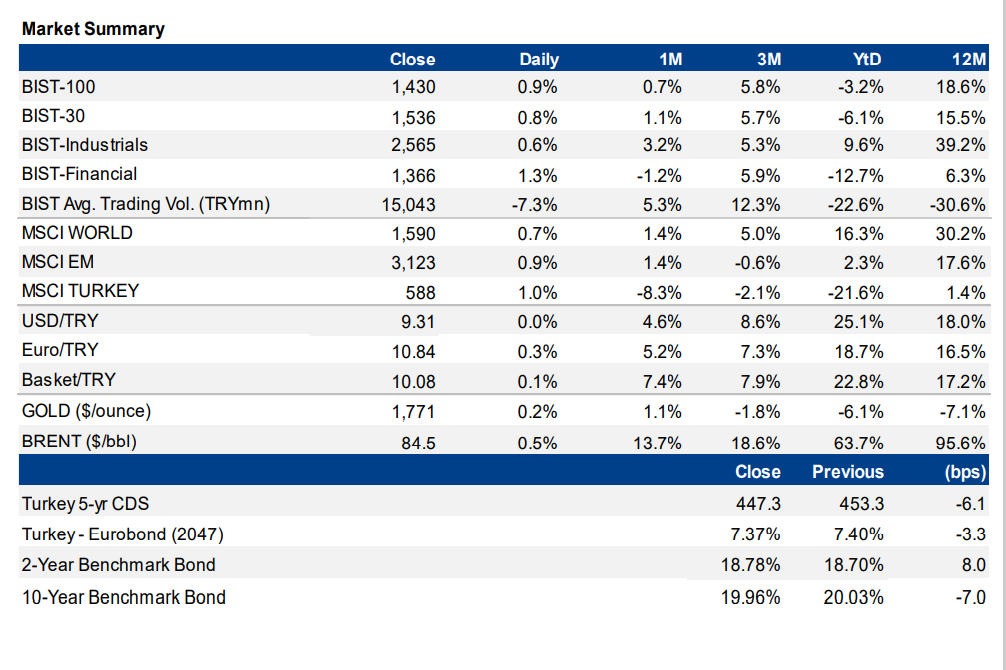 Today, budget proposal for 2022 to be presented in parliamentary commission at 01:00 p.m. and central governments domestic debt statistics to be announced at 05:30 p.m. (local time).

Vice President Oktay will present the central government budget proposal for 2022 in a parliamentary commission.

“The EU’s serious concerns on the continued deterioration of democracy, the rule of law, fundamental rights and the independence of  the judiciary have not been addressed. There was further backsliding in many areas,” the Commission said in its most critical annual report since Ankara began membership talks 16 years ago. “Under the current circumstances, Turkey’s accession negotiations have effectively come to a standstill,” it said.

Turkey’s foreign ministry said the report showed a “double-standard approach” by the EU and rejected the “unfair criticisms and baseless claims”. It accused the bloc of failing to keep its promises to Turkey and of not fulfilling its responsibilities. “Turkey maintains in the strongest terms its strategic choice of full EU membership,” the ministry said in a statement. “It would be in everyone’s interest if the EU, taking into account our common general interests, sees Turkey as a candidate country that is negotiating, not as a partner with whom to have daily give-take relations.”

A NATO ally, Turkey has been negotiating its EU membership since 2005 after economic and political reforms that made it an important  emerging market economy and trade partner.

Treasury borrowed TRY6.9bn (includes non-competitive bidding) from the market via two auctions and a direct sale.

Treasury borrowed TRY1.9bn from the market via 2-year lease certificate issuance. The settlement date is on October 20 whereas the maturity date is on 18 October 2026 (728 days) and 6-month term rent rate is at 9.05%.

Therefore, the total amount of the borrowings after 10 planned auctions for October reached to TRY36.7bn, covering around 79.5% of the TRY46.2bn redemption (also, 88.5% of domestic borrowing projection of TRY40bn for October completed).

Domestic debt program for November-January period to be announced at the end of the month.

Turkey is set to be “grey listed” by a global finance watchdog this week for failings in its approach to combating money laundering and terrorist financing, according to two western officials.

In a move that risks further denting Turkey’s already limited ability to attract crucial foreign capital, members of the Financial Action Task Force were likely to approve the decision during discussions in Paris on Thursday, the officials said.

They said an FATF review had recommended that Turkey should be subject to special monitoring by the taskforce’s International Co-operation Review Group — a process known as “grey listing” — joining 22 other states including Albania, Morocco, Syria, South Sudan and Yemen.

The 39-member plenary was “very likely” to endorse the recommendation, according to one of the officials. The other said that approval was expected to be a mere formality. The decision is due to be formally announced on Thursday.

Turkish President Recep Tayyip Erdogan kicked off a whistle-stop tour of African countries on Monday, meeting leaders and investors in Angola, Nigeria and Togo ahead of a Turkey-Africa trade summit on Thursday.

The Turkey-Africa Economic and Business Forum, held in Istanbul from 21-22 October, aims to provide a platform for Turkish businesses to gain a foothold on the continent.

As Turkey’s relations with Europe unravel, Ankara has been keen to diversify its trade away from Europe. Two-thirds of Turkey’s trade investment financing comes from Europe, but amid political tensions Erdogan has tried to kindle trade ties elsewhere, starting with the Middle East. Souring relations with Saudi Arabia, the UAE and Egypt, and a deteriorating regional security situation refocussed the president’s sights on the continent.

“Africa has been a relatively low hanging fruit, with less geopolitical problems. So Africa is part of this diversification ploy,” Tim Ash adds.