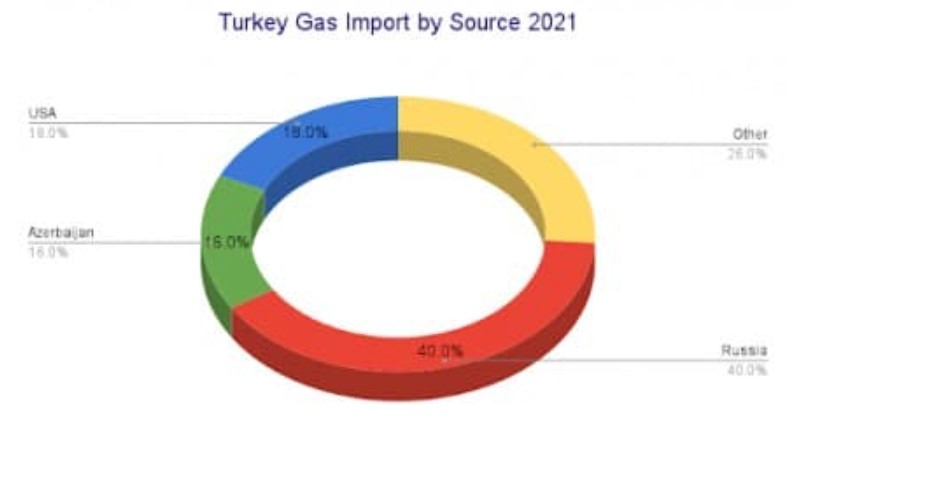 Turkey’s goal to become an energy hub seems to be further away than ever before, looking at the natural gas crisis that is currently affecting the country. At a time when the Turkish economy is already struggling with extreme inflation, high corporate debt levels and mismanagement all-over, a natural gas shortage is the last thing Ankara could use.

Turkish traders are being quoted saying that Turkish company BOTAS has issued a gas curtailment order to domestic gas power plants. Turkish power plants will only be receiving around 60% of the contracted volumes. BOTAS has indicated that the order will be in place for a period of 10 days. The order comes at a time that domestic demand for natural gas has reached record levels while Iran has cut supply. Iran has notified Turkey of a 10-day halt to natural gas supplies, but negotiations to resume supply earlier continue, officials added.

Turkey is still in dire need of additional natural gas volumes, which at present are mainly coming from Russia. Until now, domestic demand growth has been met by additional supply from Gazprom via the TurkStream and BlueStream pipelines.

With Russian dwindling, the Iranian supply cut is coming at a very bad time. Analysts already have stated that LNG is not going to be an immediate solution, as it can only partly supply Turkish demand. In the meantime, high global demand for LNG is pushing prices up in Europe and Asia. At present, Russian and Iranian gas supplies are impossible to replace for Ankara.

Ankara’s very confusing regional and geopolitical maneuvers during the last couple of weeks are part of the problem. Turkey’s president Erdogan has not only been pushing for a central role in the Russia-Ukraine conflict, which is currently reaching boiling point. Erdogan has also been very opportunistic in his approach, on one side trying to be a mediator between Kiev and Moscow, while at the same time becoming one of Ukraine’s main arms suppliers. Moscow will not be looking at this without anger, as

Turkish drones have been deployed before against Russian military actors, for example in the Armenia-Azerbaijan conflict. Turkey is also pushing for a strong position inside of Syria, confronting Russia and Iran-Hezbollah-IRGC forces on several occasions.

Taking a bird’s eye view, the lack of additional Russian natural gas supplies to Turkey, combined with the Iranian technical issues, which came shortly after Russian president Putin met with Iran’s leaders in Moscow, could be playing a larger role than many analysts may think. Hitting Turkey, or at least putting Ankara in a difficult position, might be part of the greater strategy of the Moscow-Tehran tandem. Bringing Turkey to a part standstill is also a major setback to any Turkey-NATO support for Ukraine in the coming weeks.

Erdogan’s political future is not under threat, but a cold-spell is not what the Turkish leader needs at present. With another 16% of Turkish gas imports on hold (Iran), the economy is further weakened and consumers are being hit. Due to inflation and the depreciation of the Turkish Lira (TL), which has already fallen around 44% against the US$, energy prices already have increased exponentially. The AKP government has raised electricity prices in 2022 already by 125% for high-demand commercial customers, but also 50% for the rest. Overall, natural gas prices for residents increased by 25% and 50% for industrial users, BOTAS stated.