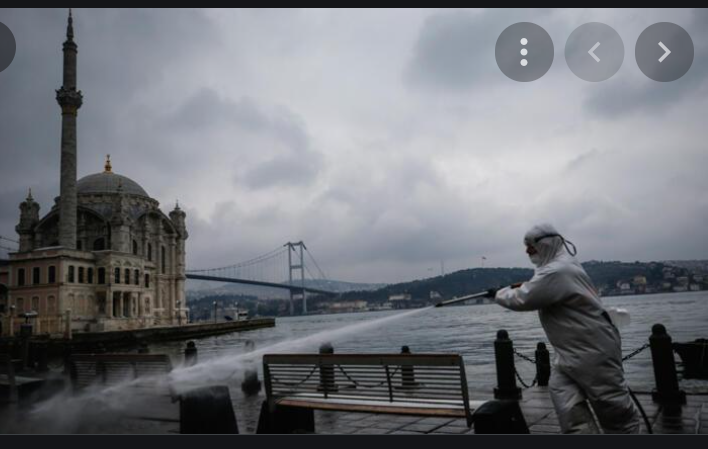 Health Minister Fahrettin Koca on Monday confirmed Turkey’s first cases of the coronavirus delta plus variant, a mutation of the delta variant first discovered in India.  Several health experts are now warning a third wave could be in the making.   Others are concerned that asymptomatic Russian tourists could be a new vector for increased infections.  On the other hand, Turkey has accelerated vaccinations and is now recommending a booster short (third dose) for everyone.

Assuring the public of the new strain, Koca said three cases of the new delta plus variant were reported in three provinces.

Speaking to the media after a Cabinet meeting, he also confirmed a rise in delta variant cases, which now stood at 284 in 30 provinces.

Health authorities have said several major vaccines work against the highly contagious delta variant, which is becoming dominant globally, but raised concerns new strains may evade some vaccines. Some scientists say the delta plus variant may be even more contagious.

Several health experts warned the public to mind social distancing, mask wearing and hygiene standards.  Physicians are concerned that a false sense of complacency could be the real  enemy.  Turkey accepts Russian tourists without PCE tests, who may be infected without symptoms.

Last summer, Health Ministry claimed the  epidemic was defeated, only to see daily cases soar above 60K/day in winter months.

While the Turkish economy received far less damage from Covid-19 thus far, growth is still subpar, as labor economists fear wide-spread layoffs in winter months. According to recent polls, dissatisfaction with the management of Covid-19 reached 49%, a new high.

Turkey, which lifted most coronavirus restrictions on July 1, has reported nearly 5.5 million COVID-19 cases and some 50,000 deaths in total. The country’s vaccination program has ramped up daily shots to more than a million.

“The delta plus (variant) was seen in three people in three separate provinces, including one in Istanbul,” Koca said. “These people are in good condition,” he added.

Turkey’s vaccine program began in January with shots developed by China’s Sinovac and has since administered the Pfizer-BioNTech vaccine as well.

Koca said Turkey currently had some 8 million shots and would receive another 26 million Pfizer-BioNtech doses this month, and 1.5 million doses of Sinovac next week.

He added that Turkey aimed to administer the first dose of a vaccine to some 43 million people by the Qurban Bayram, also known as Eid al-Adha, holiday on July 20, accounting for 70% of the country’s adult population.

“The vaccine doses received up until now and the ones we have on hand are enough,” Koca said.

Turkey has administered nearly 53 million shots in total while 15.92 million people have received a second dose, out of a population of around 84 million.

On Tuesday, the country announced the weekly number of cases per 100,000 people. New cases were on a decline in the capital Ankara and Izmir, the country’s third-largest province, while they increased in Istanbul. Between June 26 and July 2, the number of cases in Istanbul per 100,000 was around 54 while it was around 72 in Ankara. Gümüşhane and Eskişehir topped the list of provinces with the sharpest drop in the number of weekly cases during the same period.