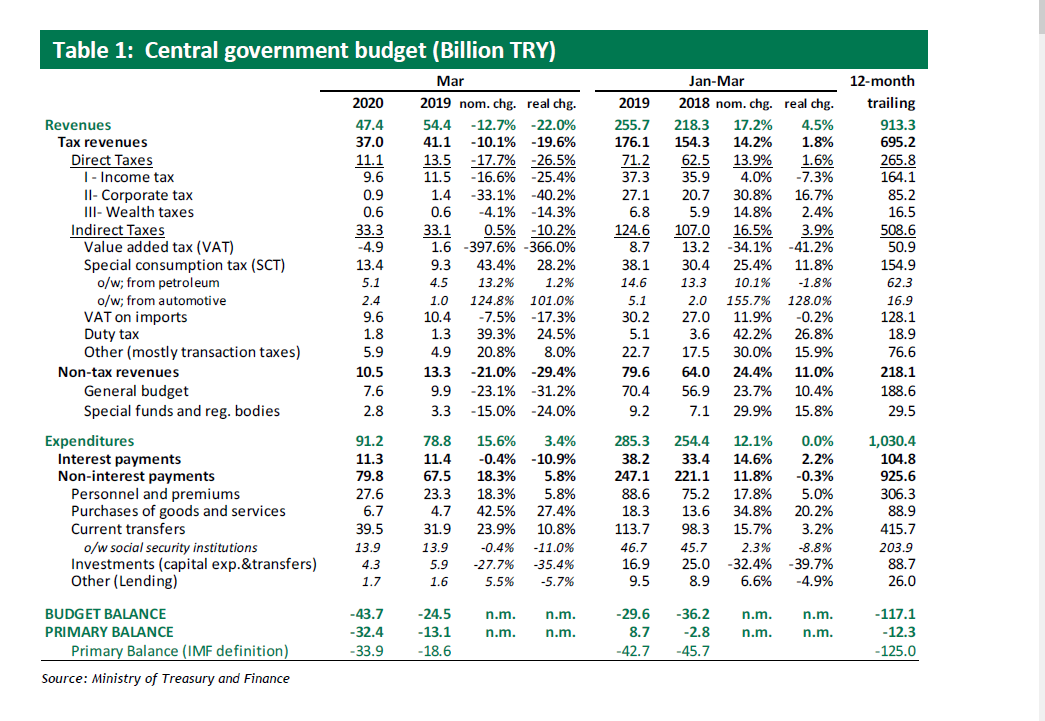 For the January-March period, we see some TRY29.6bn budget deficit and TRY8.7bn primary surplus vs. TRY 36.2bn budget deficit and TRY2.8bn primary deficit registered in the same period of 2019. Yet, IMF defined primary balance points to TRY42.7bn deficit, when the one-off revenues are excluded, TRY41bn worth of transfers from the CBRT (realized in January) in particular.

On a 12-month rolling basis, the budget deficit stands at TRY117.1bn, while there is a primary deficit of TRY12.3bn. According to the IMF definition, we observe a whopping ~TRY125bn primary deficit.

Tax revenues shrink with the halt in economic activity

The Covid-19 related halt in economic activity has started to take its toll on public budget results, as total tax revenues point to around a 20% YoY deceleration in real terms. VAT revenue actually stands at -TRY 4.8bn, which might imply that the government’s VAT rebates have by far exceeded any tax collections in March. There is also a significant decline in income taxes of 26% YoY, although SCT revenues still point to a considerable improvement compared to last year, mostly attributable to last year’s low base. Yet, we should also expect a significant deceleration in SCT revenues (on a MoM basis) over the coming few months, with a lag.

On the other hand, there is a limited 6% YoY rise in non-interest expenditures in real terms, although this will also increase significantly over the next few months, with direct budgetary transfers to those adversely affected by the business shutdowns/lock down.

There will actually be a sudden and significant rise in the budget deficit with tax deferrals, marked deceleration particularly in indirect tax revenues and direct budgetary transfers to those affected by business shutdowns. As such, the budget deficit may actually rise to about 6.5-7.0% of GDP by end-2020, from 2.9% in 2019. Recall that there had been a similar rise in the budget deficit/GDP ratio back in 2009 to 5.2%, from the prior year’s 1.7%. Note that, budget deficit tends to increase at a rather rapid pace during recessionary periods, as budget performance is merely dependent on tax revenues, rather than expenditures, as the flexibility on the side of expenditures is very limited.

It should be noted that even if the government’s wage support for workers who took unpaid leave (as per the short-term work allowance) and unemployment payments, etc. are executed through the Unemployment Insurance Fund (thereby limiting the central government budget deficit), it would mean that the Fund, for a protracted period of time, would be unable to finance the Treasury (by purchasing government bonds) to the same extent as before. As a result, the Treasury’s financing requirement from the market would rise materially (even though the over-borrowing of previous months has left some amount of cash in the Treasury’s vault).

Note that the Treasury’s domestic debt redemption schedule was already hefty in 2020 (almost double the 2019 redemptions) and we now foresee that, there may be an additional TRY100-150bn financing requirement.  In that sense, the CBRT’s decision to carry out outright T-bill purchases in a front-loaded manner and purchase the Unemployment Fund’s bond portfolio may seem plausible, as anything else could wipe out the banking sector’s already constrained funds, leading to a de-facto crowding-out. Note that the CBRT’s T-bill purchases over the past few days, have exceeded TRY26bn, bringing its portfolio to TRY46bn, which also went beyond the 5% limit.