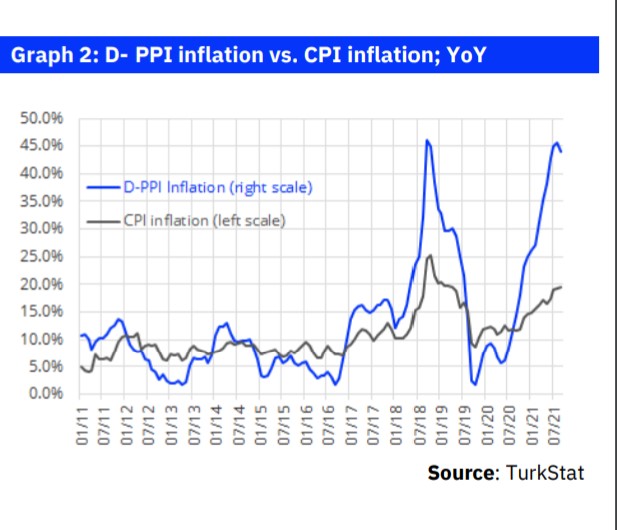 Both headline CPI inflation and core CPI inflation increased on a YoY basis in September. TurkStat revealed September CPI inflation at 1.25%, which seems in line with market expectations, which has led to a rise in YoY inflation to 19.58% from 19.25%. That said, as the main precursor for the CBRT, core inflation components are actually considerably high, such as 2.0% MoM for durable goods (despite the favourable contribution from the SCT adjustment in autos), 1.5% for other core goods, and 1.6% for services subcomponents. As a result, core CPI inflation (group C) was 1.5%, which led to a rise in YoY terms to 17.0% from 16.8%. MoM D-PPI inflation was again high at 1.55% MoM, but the strong base effect led to a deceleration in YoY terms to 44.0% from 45.2%.

Food inflation remained mild this month, as the government is prepared to open cheap grocery stores to balance the food market. Food inflation was a mere 0.5%, which was actually lower than our projections of 1.5-2.0%. The mild increase seems attributable to some correction in fruit-vegetable prices after the significant price hikes in summer months (a 3.1% deceleration after a cumulative 16.2% hike in the preceding two months), while processed food inflation was still high at 1.5% MoM. As a result, YoY food inflation fell only slightly to 28.8% from 29.0%. Food prices have actually reached exorbitantly high levels, which has become a major agenda item for the government. President Erdogan over the weekend announced that they plan to open about 1,000 grocery stores, which would sell cheap food products, in order to balance the market. Yet, structural problems that are prevailing in the food market remains intact, and hence we believe that this may serve only as a short-term solution to the problem.

Rising global energy costs were reflected in CPI inflation through coal and firewood prices. As you would recall, the government curbs energy inflation by sacrificing from SCT revenues from petroleum products (sliding-scale system), which was the also the case in September. Yet, the soaring in global energy costs were now reflected into coal and firewood prices, which led to a 2.2% MoM inflation in the energy subcomponent, which was somewhat above our expectations.

Energy prices will be a major predicament for the disinflation process over the coming period.  The government recently announced that the cost of the sliding-scale system is expected to reach TL46bn in 2021. In fact, with current currency levels and Brent oil prices and considering that the room to cover from SCT is now rather limited (e.g.: the SCT per 1 liter of diesel has now decreased to a mere TL0.12 from the original TL2.01), we calculate that this cost may actually reach as high as TL55-60bn by the end of the year (which will also recur in 2022, if the sliding-scale system remains intact).

This also means that rising energy costs should at some point be reflected into pump prices, which would prove to be a major predicament for the disinflation process over the upcoming period, along with the awaited price hikes in electricity and natural gas fees. Note that, the government also announced that the sliding-scale system has so far repressed CPI inflation by some 2.5% points, including indirect impacts.

CBRT is inclined to keep on with the rate cut process, but rising core inflation is not helpful on that front. CBRT signals that it is inclined to keep on with the rate cut process going forward, by already shifting its focus to core inflation, and by actually initiating the monetary loosening process earlier than expected in September, with an unexpected 100-bps cut. In that stance, September core inflation does not look promising, which actually does not suit with the CBRT’s plans. Furthermore, the weakening TL and likely indirect impacts from rising energy and food prices might also limit the deceleration in core inflation, which is expected to take place particularly over the last two months of the year. All in all, whether the CBRT will be able to keep on with its loosening plan remains to be seen.