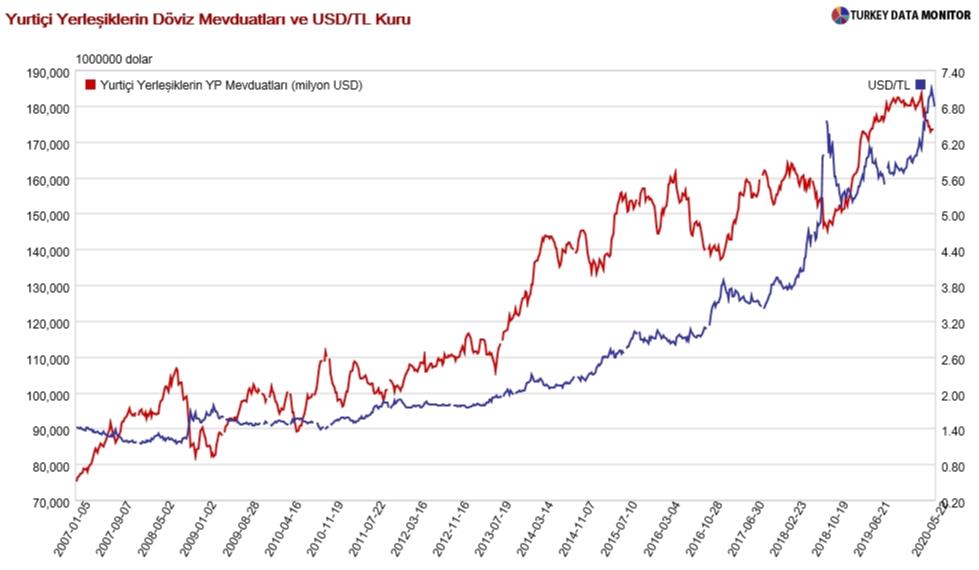 According to latest data, the FX reserves of Central Bank of Turkey (CBRT)  had declined by 6.3% to $86.3 bn.  Turkey has roughly $170 bn of foreign debt maturing in the next 12 months.  After a brief dip to 6.70 range, dollar/TL pair began to rise again, closing Thursday at 6.8174.  Traders report further FX selling by state banks, financed by CBRT.  To replenish its ammunition, CBRT is borrowing FX from commercial banks in Turkey through swap agreements.

The Turkish central bank brought its short-term borrowing of hard currency from local lenders to a record as it looked to boost international reserves after an effort to defend the lira, reports Bloomberg.

The monetary authority’s outstanding foreign-currency swap stock coming due within the next year rose by $5.9 billion in the month to $35.5 billion in April, according to the latest data published Thursday. It’s equivalent to about 40% of its gross currency reserves including gold, which stood at $86.3 billion as of the end of April.

The central bank has borrowed more than $17 billion of hard currency from local lenders through its swap facility this year, topping up its coffers as local lenders defend the lira by selling foreign exchange in the market. The central bank’s gross reserves have dropped by $20 billion in the period.

The Turkish currency has come under pressure from the economic fallout of the coronavirus pandemic, which threatened to exacerbate an outflow of foreign capital. The lira dropped to a record low of 7.2690 per dollar earlier this month. It has since rallied around 7% against the dollar and was trading at 6.8175 as of 6 am Friday in Asia.

The outlook for the Turkish currency remains grim. “USD/TRY bid as TRY is on the verge of yet another FX crisis; TRY needs higher rates or broad emerging market sentiment to turn strongly (as it has recently)” commented Danske Bank in its recent report titled “Weakest EMs catching up – watch ZAR and PLN for more”.