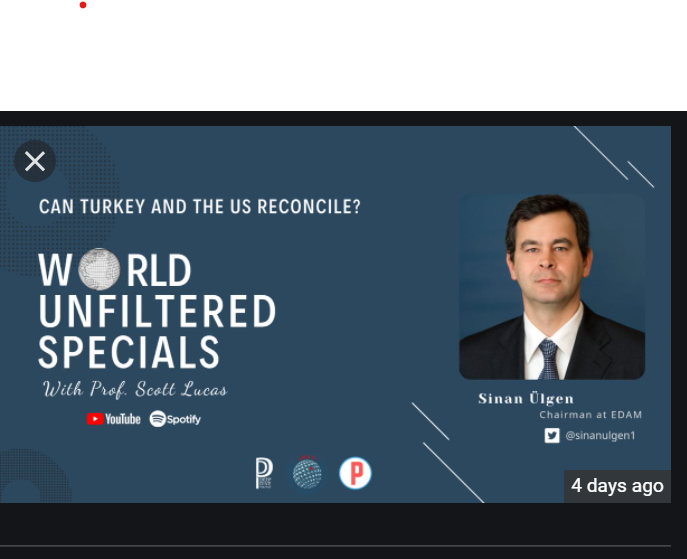 Title: Can Turkey and the Us Reconcile?

2:32 What should we expect from the first meeting between US President Biden and Turkish leader Erdoğan?

7:58  Where did Turkey lose ground with the US?

13:03 Does a “grand reset” in Turkey-US have to start with a unilateral gesture from Ankara?

17:10 Is a Turkey-US accommodation possible over Syria and the Kurdish issue?

24:16 Is the Biden Administration content to step back from the issue of Turkey’s claims in the Eastern Mediterranean?

27:57 Is the Erdoğan Government happy to put its interests behind those of the US over the Iran nuclear issue and sanctions?

32:49 To what extent is Ankara unsettled by the Biden Administration’s statement on the killing of Armenians during World War I?

38:39 Is it possible that a year from now there will be a Turkish Government with no Erdoğan in charge? Will this make a difference to US-Turkey relationship?

44:01: Do you think Biden will raise rights in his meeting with Erdoğan, including the situation of journalists and dissenters?

Sinan Ülgen is a visiting scholar at Carnegie Europe in Brussels, where his research focuses on Turkish foreign policy, nuclear policy, cyberpolicy, and transatlantic relations.

He is a founding partner of Istanbul Economics, a Turkish consulting firm that specializes in public and regulatory affairs, and chairman of the Center for Economics and Foreign Policy Studies, an independent think tank in Istanbul.

Ülgen has served in the Turkish Foreign Service in several capacities: in Ankara on the United Nations desk (1990–1992); in Brussels at the Turkish Permanent Delegation to the European Union (1992–1996); and at the Turkish embassy in Tripoli (1996).

He is a regular contributor to Turkish dailies, and his opinion pieces have been published in the International New York Times, the Financial Times, the Wall Street Journal, and Le Figaro. He was a member of the international security experts group set up by former NATO secretary general Anders Fogh Rasmussen and tasked with preparing a report on the transatlantic relationship in advance of NATO’s September 2014 summit.

DISCLAIMER: All opinions in this video reflect the views of the speaker(s), not of Deep Dive Politics.

For more, subscribe to Deep Dive Politics channel and turn on notifications.