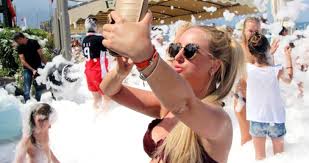 The European Union will recommend keeping its external borders shut to Americans and most other foreigners for at least two more weeks as fears grow of a second coronavirus wave, according to three officials familiar with the matter.

Member-government envoys in Brussels on Tuesday plan to urge no expansion of a list of 15 countries — Canada, Japan, South Korea and China among them — whose residents were given the green light two weeks ago to visit the EU, the officials said on the condition of anonymity.

The diplomats may also recommend shortening the list to 13 states by removing Serbia and Montenegro as a result of new infections there, two of the people said.

The plan marks the first biweekly review of a July 1 EU move to loosen a pandemic-induced curb on non-essential travel to the bloc.

Thus Turkey shall remain off-limits to EU visitors for another two weeks, which means 50% of the tourism season is already dead.

Turkey on Wednesday expressed “disappointment” to EU over its decision to continue a travel ban on Turkish nationals amid the coronavirus outbreak.

In a statement, Foreign Ministry spokesman Hami Aksoy conveyed Ankara’s concerns over excluding Turkey in the recent list of 15 countries that have been allowed to travel to EU states.

“Turkey’s efforts, measures and achievements made to stem the outbreak of coronavirus are evident. This decision should’ve been taken with objective criteria and while considering the country’s success, which was cited as an example by the World Health Organization and the international community,” he said.

Underscoring Turkey’s “exemplary solidarity with the international community during the pandemic,” Aksoy said the country will continue its cooperation and transparent information sharing regarding the outbreak with European institutions.

“We expect this mistake regarding travel restrictions for our citizens will be corrected as soon as possible,” the spokesperson said.

The decision by EU is not political, as daily corona cases in Turkey fail to drop below 1K, while there are legitimate  concerns about data tampering.  According to dissident report reports, the epidemic has traveled from three major cities, namely Istanbul, Ankara and Izmir towards  East and South East. Van and Diyarbakir report an alarming rise in new cases, only to be matched by southern metropolis like Sanliurfa and Gaziantep.

Turkey bans data from alternative sources and is still to test a random sample of population for the prevalence of the virus and natural immunity.  Haberturk columnist Muharrem Sarikaya wrote last week that his medical sources informed him a second spike could begin as early as 15 July.  Finally, Turkey continues to treat patients with the  controversial anti-malaria drug:

The Turkish Medical Association (TTB) said today in a written statement that WHO’s move after the publication of a study by the Lancet medical journal has caused concern among physicians and patients.

Minister of Health Fahrettin Koca previously said that they had been giving the drug to patients in the early stages of the disease and their “unique” approach yielded positive results.

The TTB pointed out that Turkey has been prescribing hydroxychloroquine for all patients, citing a ministry guideline dated April 14. However, the data regarding their treatment has not been disclosed, it added, reported impartial bianet.com.