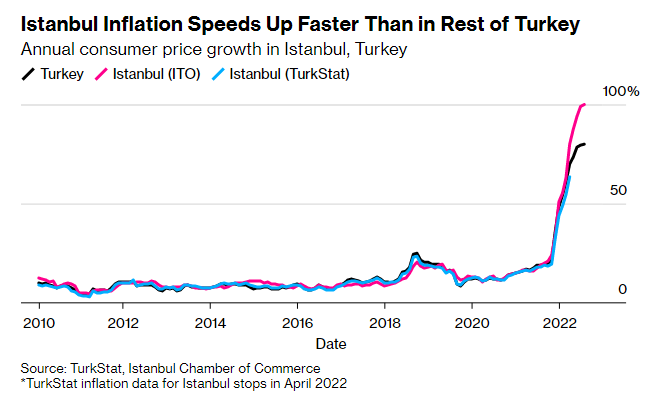 Multi-decade high levels of inflation afflicting Turkey are turning into a two-track crisis that depends on who’s counting and where.

While price growth in Istanbul for years tracked closely with nationwide figures, the correlation broke down in April, the same month that Turkey’s statistics service stopped breaking out regional data.

A cost-of-living index compiled by the Istanbul Chamber of Commerce showed the annual pace of retail inflation reached 99.9% last month in the country’s most populous city. By contrast, state-run TurkStat said price growth across the country as a whole reached 80.2% in August from a year earlier, the fourth straight month it was less than forecasts by economists.

The gap, now at the widest in data going back to 2004, creates “a bias between market expectations and released statistics,” Zumrut Imamoglu, Bank of America Corp.’s Turkey economist, said in a note to clients.

The discrepancy adds to the perception that official figures understate the extent of what’s already Turkey’s fastest inflation since 1998, a crisis that’s made it an outlier even in a world consumed by a surge in consumer prices.

ENAGroup, an independent Turkish group of scholars that uses an alternative method to calculate inflation, found that annual price growth was 181% in August.

TurkStat said it couldn’t comment on the reasons for the divergence with Istanbul. The agency said inflation in 80 other provinces was “well below” the figure in the city.

The Istanbul Chamber of Commerce, a group established in 1882 that boasts over 640,000 members, declined to comment.

Inflation figures have been under scrutiny in Turkey after the surging cost of living emerged as a major issue ahead of elections next year.

The attention has kept the spotlight on TurkStat, which has seen several high-profile departures this year. Two top officials in charge of compiling inflation statistics stepped down in May.