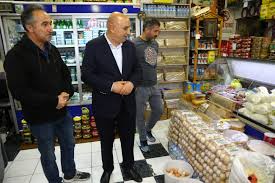 Turkey’s broad unemployment gauge climbed to 24.5-30%, according to two noted economists, Dr Ali Orhan Yalcinkaya and Mahfi Egilmez.  Most of the recently unemployed hail from the ranks of small service businesses, which suffer from weak domestic demand.  A recent survey by Istanbul Economic Research revealed 66% of the respondents being afraid of Covid-19, which in other countries translate to voluntarily sheltering at home and lower consumption.  Turkey’s thousands of owner-operated markets, butchers and grocery stores are rapidly running out of cash to stay in business.  TESK, the confederation which represents the had to finally ask President Erdogan for cash aid.

One demand stipulated that tradesmen who have taken out lines of credit be given an additional three months to repay the loans with the condition that the treasury will cover their interest.

Another called on the government to cover the social security premiums for the employees of tradesmen and artisans until the end of the year.

TESK said that basic food products and cleaning supplies should not be taxed, or the tax should be lowered to one percent.

The confederation called on tradesmen and artisans who have opened their businesses within the past years to receive direct cash support from the government, and it requested that coffeehouses that have abided by the requisite hygiene standards to be once again allowed to have their customers sit and play board games, a common past-time in cafes all over the country for retirees and the unemployed.

In Palandöken’s letter, he also referenced a regulation that seeks to raise the penalty for convenience stores selling alcohol between 10PM and 6AM from 51,600 TL to 65,320 TL. Though it is illegal to purchase alcoholic beverages from retail stores between those hours throughout Turkey, many shops ignore the ban and continue to sell at the great risk of a large fine as their best business often occurs during that time of the evening.

TESK ad its “chairman for life” Mr Palandoken had been staunchly pro-AK Party for a long time.  In as much as the 11 request are expressed politely, it is clear that  Turkey’s typically conservative artisans and small shopkeepers are giving up hope on AK Party rescuing them.