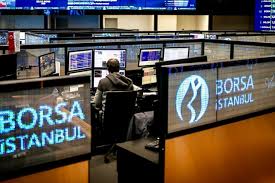 Share-trading accounts have blossomed globally during Covid-19 lockdowns as more and more people try to make money from stocks. But in few places has the take-up been as dramatic as in Turkey, where dealing in benchmark Borsa Istanbul 100 Index shares hit record levels on Tuesday, comments Bloomberg. Since the beginnig of the year, active investors registered with BIST Settlement Bank rose by 500K, or %33 YoY.  But, is this because BIST-100 is offering better prospects than other financial markets? No, thanks to excessive easing by the Central Bank, TL deposit rates are now deeply negative.  The average 1-3 month deposits earn an annual pre-tax interest rates of 8%, while the going rate of CPI is 12.65, as year-end forecast now hover around 10-11%.

An unbelievable surge in trading volume

Activity is up fivefold in a year, a faster increase than the gains across emerging markets, even outstripping booming numbers in Brazil encouraged by interest rates at an all-time low.

Diminished returns from fixed-income products and bank savings deposits as Turkish policymakers focus on protecting the lira and bolstering the economy have persuaded local mom-and-pop traders that their fortunes lie in stocks. As they have bought, foreigners have headed for the exits, taking their money to more attractive markets. The retail frenzy has made some industry veterans nervous.

“I happened to hear a shopkeeper explaining price value and book value to another man the other day — that’s the level of hype we’re seeing among locals,” said Burak Cetinceker, a fund manager at Istanbul-based Strateji Portfoy. “When you hear too much talk about stocks on the high street, you may start being cautious about Wall Street.”

Local equity-market accounts have climbed by 33% in about a year to 1.56 million, according to data from Turkey’s Central Securities Depository. Most of the enthusiastic newcomers are trading off tips from friends or following advice on hundreds of social media accounts about local stocks.

Investment advice, including price targets and analysis, is available from share pundits who can boast as many as 150,000 subscribers, said Haydar Acun, managing partner of Marmara Capital in Istanbul. “If even just a couple of percent of those followers go on and execute those trades, you start to get a lot of volume.”

Fans of these accounts — some of them paid Whatsapp groups — are often betting on relatively obscure names, said Mert Yilmaz, deputy chief executive of Istanbul-based brokerage Info Yatirim Menkul Degerler AS. “Some of them are marketing stocks that I haven’t even heard of — and I’ve been in this business for 25 years.”

Overseas investors have pulled $4.06 billion from Turkish equities in 2020, and their ownership of stocks has slipped below 50% for the first time since 2004. Steps by authorities to protect the market, including the shorting ban imposed this week on Goldman Sachs Inc., JPMorgan Chase & Co. and four other foreign brokerages, may fuel further outflows. But some foreign fund managers see local support having longer-term benefits for the Istanbul market.

“Local investors are providing a new source of demand for public equities that was absent for several years,” said Thea Jamison, a portfolio manager at Change Global Investment in Camas, Washington, who has more than 20 years of investing in emerging and frontier markets. “If the market maintains good performance, it will eventually bring back foreign flows.”

Regulators have added a cautionary tone to the buzz around Turkish stocks, advising investors to be wary of swindlers. Clearing house Takasbank recently increased the cost of margin trading in a move aimed at protecting retail traders, BloombergHT website reported Tuesday.

An increase in interest rates could derail Turkey’s recent stock rally and spell trouble for the thousands of recently opened trading accounts, said Marmara Capital’s Acun. That would test their resolve and cast doubt on “how many of these new investors will still stay and continue to invest,” he said.

But the Turkish brokerages association has confidence in the durability of the market’s latest participants. The head of the body, Alp Keler, said last week he expects them to stay for the long term, while encouraging education about the risks involved.

The frenzy is not limited to equites. House prices begin to sky-rocket once again, as wealthy retail investors sink their funds into real assets. Also booming is the second hand car market, which is the poor-woman’s equivalent to  real estate. Turkish retailers continue to add to their FX deposits, to the tune of $808 mn as of last week, while corporates drew down their by $1.3 bn to meet FX interest payments and for import orders.

Turkey’s bizarre policy set of cutting rates to stimulate fixed investments and tightly controlling the exchange via state bank intervention has pushed savers into unsafe assets, with which they are not familiar. China and the Great Financial Crisis of 2008 at large should have taught us what misalignment of asset prices and economic realities could do. Turkey’s speculative bubbles are a harbinger of an approaching financial storm.