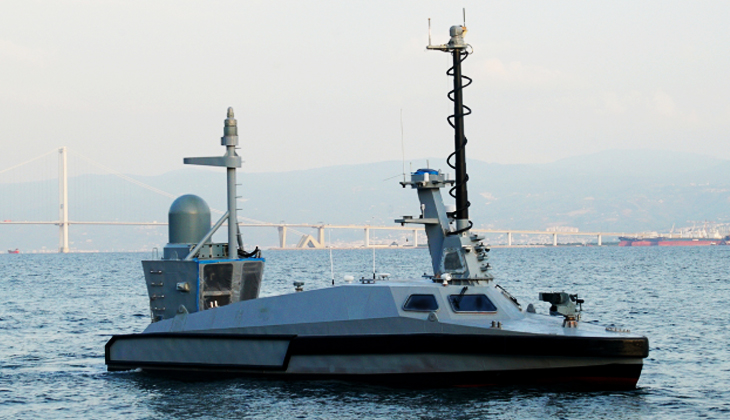 “After the SİHAs, which are shown as game changers on the field, Turkey also asserts its claim with its SİDAs! MARLIN SİDA became the first unmanned surface vehicle with electronic warfare capability in the world! Turkey is the pioneer, not the laggard! Congratulations,” Demir tweeted and shared a maneuver video of the watercraft on the sea.

Produced in cooperation with Sefine Shipyard-Aselsan with the coordination of the Defense Industry Presidency, the MARLIN SİDA unmanned sea vehicle stands out as the most capable unmanned surface watercraft.

With a length of 15 meters, MARLIN SİDA can participate in surface warfare, underwater warfare, electronic warfare and asymmetrical operations. MARLIN SİDA, which can be used more flexibly than gunboats, has the feature of being the first in the world with its warfare systems.

The MARLIN SİDA is planned to be used in naval warfare operations for defense and offensive purposes on the coast or in the open sea.

The name MARLIN is a type of swordfish. It is known among sailors as the “ship-sinker” because when it strikes a ship with its pointed nose, it can cause serious damage.

MARLIN is also invited to a NATO Exercise to be held in Portugal this month. Thus, Turkey will undertake special tasks in its own classification in the NATO exercise, such as underwater and surface reconnaissance surveillance, intelligence, electronic warfare, target detection and identification, and support for amphibious operations. While carrying out all these missions, MARLIN will demonstrate on an international platform that it has the capabilities to work together with manned naval elements.