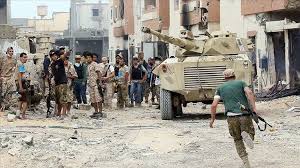 Ankara remains determined to preserve its gains in Libya, that is help the al Sarraj government establish sovereignty over the entire country defeating General Haftar. To recall, Ankara and Tripoli signed a mutual Exclusive Economic zone Agreement which gives Turkey maritime and drilling rights over a large swath of East Mediterranean.  The EEZ also intercepts a planned NG pipeline by Israel, Egypt, Greece, and Greek Cypriot administration to Italy.

According to Voice of America Turkey is threatening tough retaliation if forces loyal to Libyan general Khalifa Haftar strike Turkish interests or its diplomatic missions in Tripoli or elsewhere.

Haftar, who has set up a rival government in eastern Libya, has been fighting to topple the internationally-recognized government of Prime Minister Fayez al-Sarraj.

“If our missions and our interests in Libya are targeted, we will deem Haftar’s forces legitimate targets,” The Turkish Foreign Ministry said Sunday.

But Turkey is strongly criticizing the United Nations for what it says is the U.N.’s failure to move against Haftar.

“It is unacceptable for the United Nations to remain silent against this carnage any longer. Countries providing military, financial and political aid to Haftar are responsible for the suffering that the people of Libya are enduring and the chaos and instability the country is being dragged into,” the foreign ministry statement said.

Turkey supports the Tripoli-based government as it tries to defend itself from a year-long offensive from Haftar to seize the capital.

Weekend shelling in and around Tripoli has killed as many as six and wounded several dozen, reports say.

Residents in Tripoli say the fighting has been some the worst in recent months. The country’s only functioning airport has been badly damaged and parts of northern Libya are at risk of going dry after armed men stormed a power station belonging to the government’s water authority.

Al-Sarraj’s Government of National Accord, has been able to push back Haftar’s forces which have the support of Egypt, Russia, and the United Arab Emirates.

Appeals from the European Union to all foreign countries earlier this year to stop supplying arms and interfering in Libya and let peace talks proceed have gone nowhere.

It may be the closest thing to a foreign-policy success that President Recep Tayyip Erdogan has had in years: Turkey’s intervention in Libya’s civil war has seemingly turned the tide in favor of the side he is backing. After a string of military successes by the Government of National Accord, the rebel commander Khalifa Haftar has been obliged to offer — under the convenient cover of Ramadan — a truce.

There is no doubt where the credit is due. The GNA was down and very nearly out at the end of last year when Erdogan decided to provide military assistance. Haftar’s forces controlled most of the country; although the government of Prime Minister Fayez al-Sarraj had international recognition, its writ ran not much beyond Tripoli. It seemed a matter of months, perhaps even weeks, before the rebels took the capital.

Turkish troops and arms — and a large contingent of Syrian fighters answering to Ankara — have allowed the GNA to take the fight to the rebels. In critical theaters of the conflict, the besiegers are now the besieged, with the GNA rejecting Haftar’s truce offer.

This reversal is doubly impressive when you consider the array of Haftar’s allies: Egypt and the United Arab Emirates have provided him with substantial military support, and Russian fighters have acted as “force multipliers.”

But Erdogan has little room to savor the vindication of his decision —unpopular with his own people — to intervene in Libya. Imposing an ever larger toll on Turkey, the coronavirus crisis is drowning out any discussion of foreign policy. For Turks paying close attention to their president’s military gambits, the successes on Libyan battlefield are also overshadowed by the stalemate in Syria”.