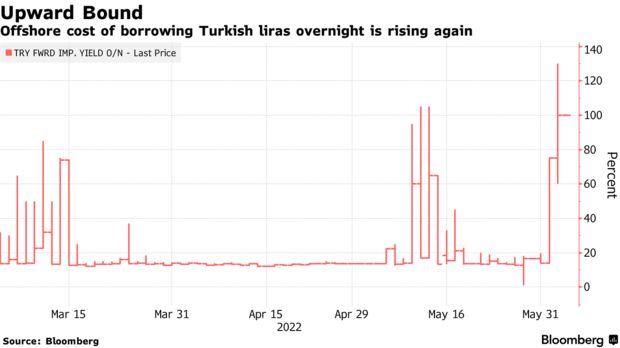 Turkey is planning to restrict purchases by domestic investors of new lira bonds sold by multinational lenders, the latest effort to curb short selling of the local currency by limiting the supply of liquidity in the offshore market.

In recent months, the central bank made verbal warnings to local lenders to refrain from marketing such securities, known as supranational bonds, to their customers, according to people familiar with the discussions. They spoke on the condition of anonymity because the information isn’t public.

Authorities are planning further to tighten control of the purchases, according to a senior Turkish official with knowledge of the matter. The goal is to increase the cost of speculating against the lira by making less local currency available outside Turkey.

The overnight forward-implied yield on the lira is already around 100% and the cost of borrowing in the offshore market may rise further if the latest measure proceeds.

The new policy is a variation of an approach used repeatedly by authorities to get in the way of the lira’s depreciation since a currency crisis in August 2018. In March, Turkey’s banking regulator warned local lenders not to provide lira liquidity to firms looking to speculate against it in the offshore market.

Such restrictions cause dislocations in the market and may provide temporary relief for the lira but without addressing the reasons for its chronic weakness. Under pressure from ultra-loose monetary policy and the fastest inflation in two decades, the Turkish currency has lost nearly 20% against the dollar this year, the biggest decline among its peers in emerging markets.

The latest step would take aim at lira-denominated debt issued by the likes of the International Finance Corp., the World Bank Group’s arm for the private sector, and the European Bank for Reconstruction and Development.

Just this year, the London-based bank known as EBRD alone sold more than two dozen issues of lira debt, raising the equivalent of more than $500 million.

The supranational securities have been popular among local investors because they offer better returns with higher credit ratings than comparable domestic notes.

The urgency for more measures to defend the lira is rising after its depreciation accelerated in recent weeks. Fringe measures including a new deposit program that protects savers from the currency’s volatility bought some time by ensuring a period of stability following a crash in December.

But the efforts, alongside unannounced interventions in the foreign-exchange markets by the Turkish central bank and state-owned lenders, have failed to stem the lira’s recent volatility, as investors focused on galloping inflation.

Consumer prices rose an annual 73.5% in May, or nearly 15 times the central bank’s official target.

“It’s a continuation of what we’ve seen before of trying to provide the lira with support using measures which are unlikely to prove sufficient — instead of raising interest rates in response to rapidly rising inflation,” said Piotr Matys, an analyst at InTouch Capital Markets Ltd.