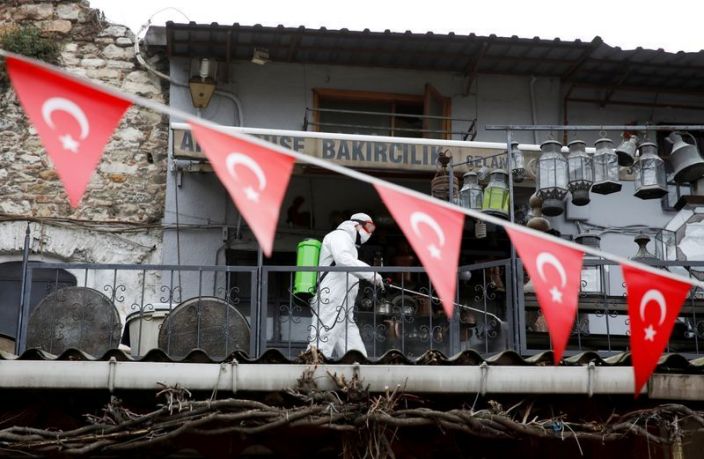 Despite prognostications to the contrary, Turkey’s battle against Cvid-19 seems to have stuck a few inches before victory, as the daily case load briefly dropped to 1.100 range only to stabilize at 1.600 for the rest of the week of 11-16 May.  Many publications measure a country’s success in fighting corona by the low number of deaths[1], which is certainly a great benefit from a human perspective. However, from a socio-economic viewpoint, it is the daily caseload which determines success because as long as it remains high as is the case in Turkey, any effort to normalize social and economic activity runs the risk of  a second wave.

In fact, the latest statement regarding Ro by the Health Minister Mr. Fahrettin Koca is that it is at about 1.56, too high for comfort. In Germany it had to be brought down to 0.7 before any re-opening of the economy was considered.  In a nutshell, the specter of a second wave in Turkey remains unacceptably high. Nevertheless, the Erdogan administration dreams of a V shaped recovery in the second half of the year, driven by pent-up consumer demand and tourism.

The research article I located below does show some recovery in economic activity in May (as well as being sympathetic to the view that Turkey achieved great success in combating the outbreak), but its conclusions ought to be read carefully.  Turkey could be at the edge of the proverbial U shaped recovery.

The containment measures are expected to have unavoidable consequences for production and trade. Therefore, to measure the real-time production effects of the COVID-19 crisis in Turkey, I look at electricity demand. This choice was inspired by McWilliams and Zachmann (2020), whose starting point is the fact that much economic activity is reliant on the use of electricity. This holds true for Turkey, with the two series having a correlation coefficient of 0.82.

The Bruegel electricity tracker provided by McWilliams and Zachmann (2020) does not include Turkey yet. Therefore, I calculated the daily electricity consumption using their methodology except for the temperature adjustment. I also looked at peak-hour consumption (08:00-18:00) because most economic activity would typically happen in this period. Weekends and public holidays were disregarded. Finally, each week in 2020 was aligned with the corresponding week in 2019. Figure 4 illustrates the change in daily peak-time electricity consumption during the COVID-19 crisis compared to 2019.

The decline in production right after the containment measures started taking effect is obvious in the figure. The lowest point was reached in mid-April, indicating that production dropped to 74% of 2019 levels. Afterwards, there was a recovery period in the second half of April extending to early May. Indeed, by 7 May, production in 2020 has bumped up to 92% of that in 2019.

Similar to findings of Acemoğlu et al. (2020), the strict and long lockdown for people aged above 65 years in Turkey both reduced infection/death rates and enabled less strict containment measures for the lower-risk groups. This, in turn, seemed to help reduce a contraction in production that could have been much worse with a uniform lockdown policy. The major brunt of the health crisis in terms of its human costs was borne by the working-class.

The monthly change of the capacity utilisation rate shows this situation from a sectoral perspective. Almost all manufacturing sectors contracted, but some were hit harder than others.

Capacity utilisation of textiles, apparel, leather, motor vehicles, and furniture declined more than 40% in April compared to March. Any decline in the activity of these key sectors is particularly important because these are among the largest and the most export-intensive sectors in Turkey. The main culprit for the large contractions is the anaemic, almost non-existent demand. For people trapped in their homes, buying textiles, apparel, shoes, furniture, or cars should have seemed meaningless.

On the supply side, there are at least two explanations for the decline in industrial production. First, in the initial days of the containment measures, plants got quarantined for 14-days even if just one worker was reported to have contracted COVID-19. However, there was considerable heterogeneity among manufacturing firms in terms of reporting infections to the authorities. Some reported the COVID-19 cases if there were any. Some got caught through contact-tracing practices; yet some flew under the radar and eluded the quarantine.

Second, producers had a hard time procuring their intermediate inputs. Therefore, the impact of the containment measures was not only felt by the quarantined plant but also by its downstream customers.

The Turkish economy had not recovered from the adverse effects of the 2018 recession when the COVID-19 crisis started to shake the world economy from its foundations. Increasingly bleak economic-growth forecasts started pouring out from major international organisations; that an unprecedented economic downturn since the Great Depression was imminent seemed to be the common message.

In early May, the European Commission (2020) lowered its 2020 economic growth figures for the world economy to -3.5% and the EU economy to -7.2%. For Turkey, the figure was -5.4%. Depending upon the scenario, these numbers fluctuate significantly across different institutions and studies for Turkey.

The level or growth rate of industrial production in Turkey in the medium run will likely be in the same predicament. The forecasts will be determined especially by two factors: production linkages and timing, and the modus of the lifting of containment measures.

One of his noteworthy conclusions is that the service sectors in Turkey will be disproportionally hard-hit by the COVID-19 containment measures. Weak demand is the main explanation, however; the production networks is at least as important. Therefore, any forecast in regard to the medium-run behaviour of production in Turkey has to account for both domestic and international value chains.

Similar to other countries whose authorities believe that infections have already peaked, Turkey has recently announced a gradual lifting of containment measures. As both Turkey and its international production partners lift their COVID-19-related restrictions, production will soar to satisfy the appetite of shopping-deprived customers. Add to that the unrestricted access to previous value chains and we will certainly see a boom of production in the short-run.

However, neither the timing nor the modus of removing containment measures are fail-safe. Should policy mistakes give rise to a second wave of COVID-19 – a medical shock with its cascading effects – what happens to production in the medium run in Turkey remains ambiguous.

I have removed charts and explanations for convenience, they can be viewed in the original article.

[1][1] In any case, number of deaths are very likely to be understated in Turkey, as elsewhere because of the overburdening of the health system and confusions about methodology.