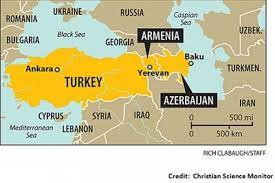 A new highway that cuts through land Azerbaijan captured from Armenia less than a year ago showcases Turkey’s growing economic presence in a region that has long been seen as part of Russia’s domain.

The road links Azerbaijan with the historic city of Shusha, the biggest prize Azerbaijan snatched from Armenia in a six-week war over the disputed region of Nagorno-Karabakh. Thousands died in the 2020 conflict, in which Turkey supplied firepower to help Azerbaijan achieve a decisive edge.

Now, Erdogan is reaching out to arch-foe Armenia as he tries to cement Turkey’s influence in the south Caucasus, where it vies with Russia and Iran. He has suggested diplomatic relations could be restored after a nearly 30-year rupture. Nikol Pashinyan, Armenia’s prime minister, has said he is ready for talks “without preconditions”.

Turkey sealed its border with Armenia in 1993 to protest against Yerevan’s takeover of Nagorno-Karabakh, a predominantly ethnic Armenian region that is internationally recognised as part of Azerbaijan.

Russia-brokered ceasefire terms in November 2020 handed Azerbaijan most of the land it had lost to Armenia in the 1990s conflict. Turkey has said the return of the territory eliminates the main obstacle blocking formal ties with Armenia, and in recent weeks Erdogan has said he could work to “gradually normalise relations”. Armenia says it is ready to reciprocate.

“As there are positive signals coming from both sides, it gives the opportunity at some point in the near future to start talks . . . on opening the border, starting economic relations and relations between the governments,” said Armen Grigoryan, Armenia’s security council secretary.

A thaw would allow trade and diplomacy to take root, but fully fledged reconciliation remains a distant prospect. The neighbours are haunted by the first world war-era genocide of Armenians in the Ottoman Empire, which Turkey denies was a state-orchestrated campaign.

Critically, Baku is now less resistant to a breakthrough between Ankara and Yerevan. Ilham Aliyev, Azerbaijan’s president, foiled their last attempt to mend fences in 2009, when Erdogan sought to appease him by stipulating that Armenia first resolve the Nagorno-Karabakh conflict.

“The situation has changed tremendously since 2009 . . . Turkish-Armenian relations should be up to the two countries,” said Hikmet Hajiev, Aliyev’s foreign policy adviser. “We’d love to see a more inclusive process. Everyone should be in if you’re talking about long-term security and stability in the region.”

Since last year, Moscow has largely sidelined Ankara in the post-conflict diplomacy, said Richard Giragosian, director of the Regional Studies Center, a Yerevan think-tank. “We have Russian stage management [on] all regional restoration of trade and transport without Turkey at the table. For Turkey, Armenia normalisation is the way to get back a seat.”

Inserting Turkey into a regional peace initiative may help Azerbaijan counterbalance Russia, which maintains a military base in Armenia. “Allowing Armenia-Turkey normalisation and bringing Turkey back into the region is necessary to counter Aliyev’s vulnerability to the Russians,” Giragosian said.

An enhanced role for Turkey in the region could serve Russia too. Erdogan and Vladimir Putin, Russia’s president, support opposing sides in a series of armed conflicts but have crafted a complex security partnership, unnerving Turkey’s traditional western allies. On Saturday, the Turkish leader said he had ordered the expulsion of the ambassador to the US along with nine European envoys, threatening to send Ankara’s relations with western capitals plummeting to a new low.

Thomas de Waal, a fellow at Carnegie Europe, said the distrust of the west shared by Erdogan and Putin might compel them to co-operate in the Caucasus to keep the US and Europe on the margins. “They are frenemies that disagree on so many issues but they also talk the same language and have the same Great Power conception that they should sort things out between themselves,” he added.

Russia may also be persuaded by the opportunity to revive a Soviet-era direct physical link with Turkey on the railway it fully owns in Armenia, part of its push for greater control of commercial links in the region.

For its part, Baku hopes the promise of trade with its neighbours will lure Armenia to open an overland corridor for Azerbaijan to reach its exclave of Nakhchivan and Turkey. “It’s for Armenians’ own benefit to transform from a landlocked country to a transit country,” Hajiev said.

Armenia appears unswayed by economic enticements, arguing a peace agreement must come first. “The problem . . . between Armenia and Azerbaijan is not economic. It is the Nagorno-Karabakh conflict,” Grigoryan said.

While Pashinyan and Aliyev say they want a peace process, they remain as divided as ever over the fate of the rest of Nagorno-Karabakh that remains in ethnic Armenian hands. Yerevan wants them to retain self-determination while Baku rejects any autonomy for the region.

Both sides continue to reinforce positions along the new front line, and skirmishes flare despite the presence of 2,000 Russian peacekeepers.

‘Imagine when this city rises from the ashes’

Even if Turkey is not at the negotiating table, its companies are snapping up contracts in reconstruction projects that could total $15bn over the next decade. Aliyev pledged that companies from countries that were “friendly” during the war would benefit, and Erdogan proved his closest ally. This week he is due to accompany Aliyev at the inauguration of an airport that Turkish companies helped build. Azerbaijan is rebuilding Shusha, the nearby former manufacturing centre of Agdam and other areas destroyed by three decades of hostility, to pave the way for the return of hundreds of thousands of Azerbaijanis to areas they fled a generation ago. Last year’s war displaced 35,000 Armenians.

“Those are the villages where Armenians live in poverty,” Huseynov said, pointing to a cluster of houses visible across the Russian-patrolled ceasefire line. “Imagine when this city rises from the ashes. They will see it and come knocking for jobs and to be friends. It’s the best politics. You don’t even have to fight.”