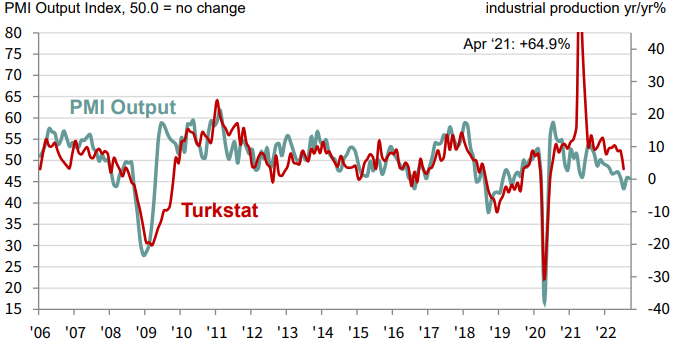 The latest PMI® survey data from Istanbul Chamber of Industry and S&P Global signalled a further slowdown in the Turkish manufacturing sector, with output, new orders and purchasing activity all moderating. Easing workloads meant that firms scaled back employment, ending a period of job creation which began in June 2020. Meanwhile, rates of input cost and output price inflation quickened.

At 46.9 in September, the latest reading was down from 47.4 in August, thereby pointing to a more marked slowdown at the end of the third quarter. Anecdotal evidence suggested that fragile demand conditions and inflationary pressures were the main factors leading to slowdowns of both output and new orders during September. Total new business has now moderated on a monthly basis throughout the past year, with output slowing for the tenth month running.

The rate of inflation quickened from August, but was still the second-weakest since the initial wave of the COVID-19 pandemic. A similar picture was seen with regards to output prices as firms passed higher costs on to customers.

Employment was scaled back for the first time in 28 months during September, both in response to softer workloads and due to voluntary resignations. Input buying and stocks of purchases also moderated amid waning demand and price considerations.

Stocks of finished goods, on the other hand, increased as weakness in new orders left firms with
unsold goods. In fact, the fifth consecutive monthly increase in post-production inventories was the
sharpest since February 2012.

“The September PMI data provided few reasons for cheer for Turkish manufacturers as demand conditions both at home and abroad (notably in Europe), remained challenging. The sustained slowdown in new work has had an impact on employment, with  firms scaling back workforces for the first time since the initial wave of the pandemic. With manufacturers sitting on increasingly large finished goods inventories, the prospects for production over the coming months appear bleak.”