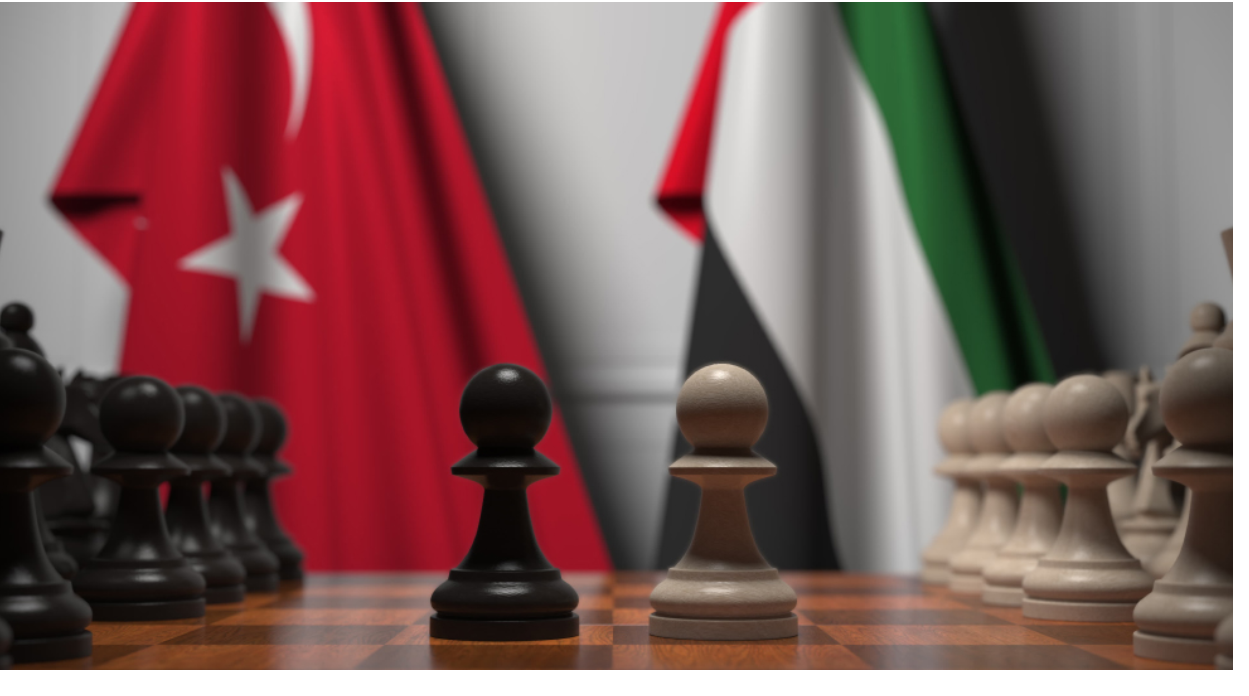 In the decade since the Arab Spring, Turkey and the United Arab Emirates (UAE) have been locked in a rivalry, taking diverging positions on Egypt, Libya, and Qatar, to name just a few issues. The political tension greatly impacted their economic ties and reduced investment activity. However, Turkish President Recep Tayyip Erdogan’s February 14 visit to the UAE—during which the two countries signed thirteen agreements in defense, trade, technology, agriculture, and other sectors—indicates that rapprochement is well underway. Strategic and economic factors are behind this shift and many benefits can come from closer ties.

Strategic and economic factors are bringing Turkey and the UAE closer

From a strategic perspective, the transition in US policy in the Middle East to a more practical, less assertive approach with less ambitious objectives has impacted Turkish-UAE relations. The US policy shift isn’t new and has played out in various degrees in consecutive administrations, culminating in the chaotic withdrawal from Afghanistan in August 2021. The intent is to focus on stability—as opposed to democracy promotion—because the United States wants and needs to focus on other issues, such as China, Russia, and domestic challenges like the economy. The United States also supports improving Turkish-UAE relations, which only helps incentivize both sides.

As for the UAE, part of its strategic calculation is a desire to expand alliances and not rely solely on the United States. Thus, we are seeing more attempts by the UAE and other Middle East governments to promote regional diplomacy over conflict and increase trade and economic ties to bolster the region’s position as a whole vis-à-vis large players like China.

Similarly, over the past year, Turkey has pursued broad diplomatic efforts to normalize its relations with countries around the region—including Israel, Egypt, Saudi Arabia, Armenia, and the UAE—in response to the changing geopolitical landscape. So far, efforts with the UAE have progressed the furthest, with reciprocal head of state visits to both capitals.

Domestic issues are also a salient force behind the warming of Turkish-UAE relations. The pandemic created and exposed economic issues that must be addressed and both countries understandably want to focus inward to resolve these.

Turkey’s recent economic issues—including the precipitous drop of the Turkish lira’s value—stem from the erratic economic policy shift in the country and have been exacerbated by global inflation and the prospect of rate increases in the United States. Unemployment is also a challenge in Turkey, which stands at 11.2 percent. However, the recently released economic growth numbers for 2021, if sustainable, raises hopes that the Turkish economy will start creating employment again.

On the other hand, the recent Ukraine-Russia conflict is expected to create a new shadow on the Turkish economy by decreasing its tourism revenue. Turkey will hold elections in 2023, so President Erdogan wants to make tangible progress on economic issues before then and also point to his progress in improving international relations, since Turkey needs foreign investments to grow and create employment.

The UAE recognized long ago that diversification is vital for its long-term survival, given the decline in oil prices and resources. For this reason, the UAE has enacted dynamic policies that have attracted companies and entrepreneurs to prepare for a post-oil economic future, where the most valuable asset is human talent driving innovation and technology.

During the pandemic, the country accelerated reforms to maintain its regional hub and fend off a resurgent Saudi Arabia. Turkey fits nicely into the UAE’s diversification goals as one of the largest regional markets. with a large, educated population and strategic location.

A significant history of trade ties, despite tensions

Turkey and the UAE shared significant economic ties in the past two decades. Despite political conflicts over disagreements in Egypt and Libya (to name a few), the UAE was an investor in Turkey and the country benefited from the UAE’s rise as a regional hub, with Turkish companies participating in construction, real estate, hospitality, and logistics.

In fact, the Gulf region was the most dependable and aggressive investor in Turkey over the last few decades because of the opportunities in the financial sector, technology sector, industrial sector, and construction and real estate sectors. In terms of foreign direct investment (FDI), the Gulf represents 7 percent of Turkey’s FDI today. In comparison, the United States—a much larger economy—represents a similar amount: 8 percent of Turkey’s FDI.

While the political disagreements impacted FDI, the overall impact was not severe, as Qatar increased its investments in Turkey during this period, somewhat blunting the decline from the UAE. The UAE’s recent investments have given the green light to private sector companies eager to reengage in Turkey’s vast economy.

Looking to the future

This rapprochement can be a catalyst for positive change and may lead to interesting spillover benefits, namely:

The renewed engagement between Turkey and the UAE may set the stage for further economic cooperation across the region. Turkey and the UAE should work to bring large economies, such as Egypt and Saudi Arabia, into regional economic integration efforts. By doing so, the countries create a massive bloc to counter China’s increased activity in the region and provide trade and economic benefits to the region as a whole.

Now that official relations between Turkey and the UAE are improving, the private sector needs to reengage in dialogue to ensure that they can take advantage of the political stability that will come out of these agreements. There is pent-up demand to increase investment and business activity on both sides that should be unleashed given this new détente.

Saudi Arabia’s economic awakening and its planned transition in the next decade—through its Vision 2030 framework—represents tremendous opportunity for Turkish construction, real estate, and tourism firms. Turkey’s size and rich talent pool of leadership, management, and skilled workers would be a boon for the Gulf states.

The renewed support and investment from the Gulf Cooperation Council (GCC) may help stabilize the Turkish lira, given that Turkey implements the right economic policies. GCC support may influence positive policy changes that will help to increase Turkey’s FDI.

Amjad Ahmad is Director and Senior Fellow at the Atlantic Council’s empowerME Initiative at the Rafik Hariri Center for the Middle East. Amjad is also managing partner of the venture capital firm Precinct Partners and serves on the boards of Homzmart, Tapal Tea, RSA Global, Mr. Usta, and The Luxury Closet. Follow him @AmjadAhmadVC

Defne Arslan is Senior Director of the Atlantic Council’s Atlantic Council IN TURKEY & Turkey programs. She was formerly a Chief Turkey economist and senior energy expert on regional policies at the U.S. State Department working through US Embassy Ankara as well as the founding project finance coordinator of the Turkish International Cooperation Agency. Follow her @defnesadiklar

This is only an excerpt from the linked article