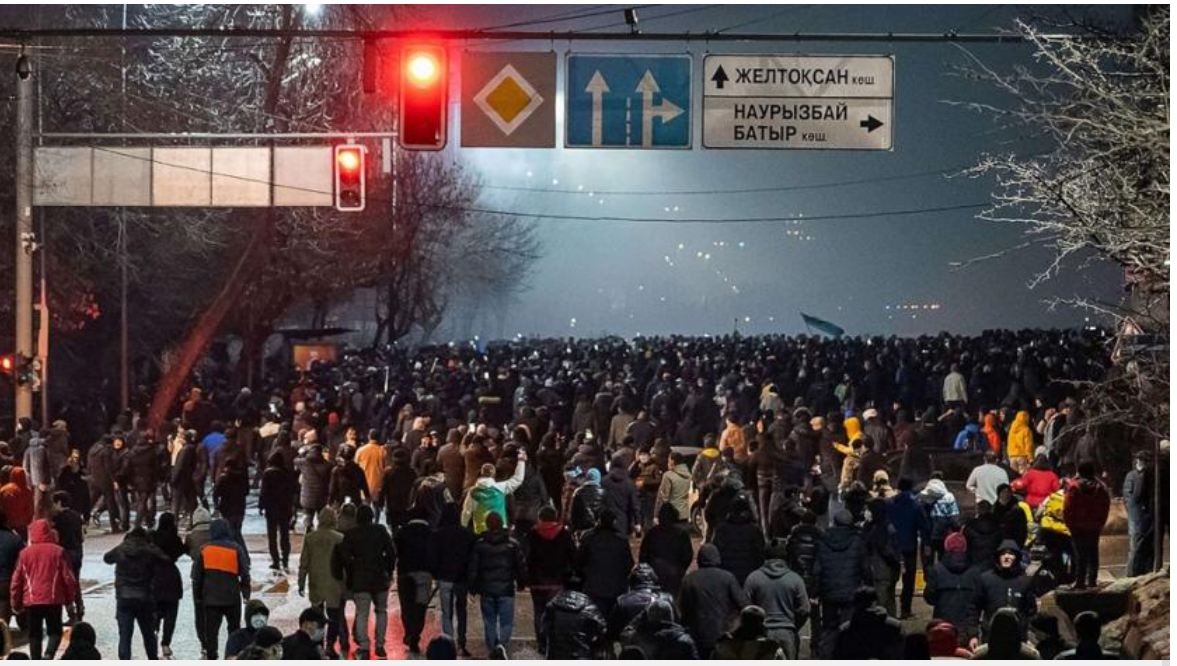 So it seems that “order” will be restored in Kazakhstan, but only with the help of Russian/CSTO troops.

The subsequent crackdown will likely be far reaching.

Events this week seemed to suggest that Kazakh security forces were reluctant to fire on their own people – no such problem for Putin who has proven more than willing to put down his own people so will have absolutely no qualms in doing the same to other peoples’.

I would expect the bulk of the manpower here will be Russian, but with Belarus’ security forces using some of the “techniques” they have recently deployed at home. Lesser parts are likely to be played by more reluctant partners such as the Armenians and Kyrgyz.

All very sad but predictable

I guess as it was always clear that Putin at least viewed Kazakhstan to be firmly in the Russian “sphere of influence” and Moscow would ultimately intervene if need be. I think here Moscow likely gave Tokayev the ultimatum to clear demonstrations or Moscow would do it for them and this might ultimately end up with Northern Kazakhstan sliced off – the bit where ethnic Russians are mostly located.

Shades here of Ukraine 2003/04 and again 2013/14 where Moscow gave Kuchma and then Yanukovych orders to clear the streets of Kyiv, or else. Kuchma largely avoided bloodshed during the Orange Revolution, Yanukovych not and the rest is history.

In any event the Kazakh “spring” looks set to turn into a long winter for the opposition.

Notable here how the West has held its punches in criticising the Nazarbaev/Tokayev regime – perhaps mindful of not playing to the Russian narrative that this is all a Western plot and another attempt at a coloured revolution. Likely their main focus is the looming US/NATO – Russia talks on Ukraine, and Biden does not want to make those negotiations even more difficult. There may also be a recognition of Kazakhstan’s important position as a major supplier of raw materials to global markets. There is also I guess a desire to see how this all plays out, before reacting.

From a  market perspective  the question will be if the worst case happens and we see a brutal crackdown will the West respond with sanctions and how does this impact Kazakhstan’s ESG score? Will Kazakhstan follow the Belarus course therein where it has become difficult for Western portfolio investors to hold Belarus’ assets. Again the broader setting in terms of US – Russia relations and also Kazakhstan’s importance in raw material supply chain will likely weigh. Note here the still huge Western foreign direct investments in the country – from oil and energy to metals and even agriculture.

Presumably any crackdown will be accompanied by big social spending – looser fiscal, worsening the public finance profile but from a very strong starting point with low debt ratios and plenty of FX reserves. The popular focus on inflation though will likely see the NBK adopt a very hawkish monetary policy stance – and FX intervention to keep the tenge stable.

A question for me here is if Russian troops are used to suppress Kazakh opposition how this impacts popular perceptions of Russia and does it risk a longer term surge in Kazakh nationalist sentiment which might be more difficult to control.

I still don’t see all this having much of an impact on the crisis around Ukraine, and the Biden – Putin Geneva summit.

I think Putin will be smarting over what he will see as a Western plot in Kazakhstan. He will look for a face saving payback in Geneva and ultimately in Ukraine. Biden likely sees less need now to concede ground to Putin – he will see Putin as weakened by this and militarily stretched and less likely to further attack Ukraine. I think that would be a miscalculation as I think the wounded Putin is likely to be more dangerous now.

One final note in terms of Russia’s reaction to events in Kazakhstan. Clearly Moscow would have planned for such an eventuality in Kazakhstan. A military play book would already be prepared and they have just rolled it out. And while Moscow likely will have been shocked by how quickly the unrest spread and how quickly Kazakh security forces were overwhelmed, Moscow has still tried to take advantage from the crisis – as it did in Belarus after elections challenged Lukashenko’s dominance. What we are seeing as a result is Russia tightening its grip on the near abroad – Russia is weakening the sovereignty of Belarus and Kazakhstan as a result. Does this make the Russian controlled “block” stronger? The danger here is that a less free FSU space sees economic stagnation, out migration and decline. Security might be tighter in the block but the long term economic outlook is weaker as a result.