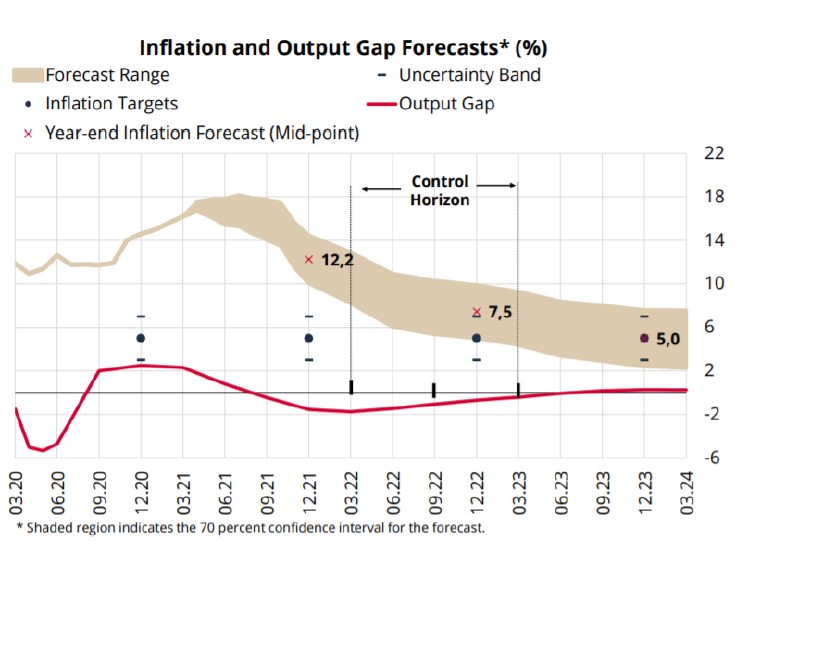 Turkey’s central bank raised its inflation projections for the end of this year and pledged to continue with elevated borrowing costs after the appointment of a new governor unleashed a market rout.

The lira slumped after Governor Sahap Kavcioglu said the current inflation outlook requires him to maintain a tight monetary policy stance with “great determination and patience.”  However, the TL weakness could be caused by modestly stronger Dollar Index and a marginal jump by US 10 year yields.

Consumer-price growth will finish the year at 12.2%, compared with a previous forecast of 9.4%, Kavcioglu said Thursday as he unveiled the first inflation report of his central banking career.  The upward revision was met with derision by most economists contacted by PATurkey, among whom consensus is closer to 15% at CPI level.

Below are some of the highlights of his statement:

* Consumer inflation is expected to have peaked last month; central bank will use all tools at its disposal to achieve price stability.

* Policy rate will remain above “actual and expected rate of inflation” to maintain a strong, disinflationary impact,

Tim Ash comments: Hard to be particularly inspired by this

Kavcioglu tries to keep to the orthodox language, but the assumptions in the report look very optimistic.

First, they assume Covid eases and tourism recovers from Q2. They also assume that after strong growth in Q1, the economy slows in Q2. This seems both optimistic and inconsistent in my view.

Second, while he revised end year inflation forecasts from 9.4% to 12.2%, he talks about inflation peaking in April at 17%, from 16.2% in March, and then obviously moderating thru year end.

But let’s not forget that the currency has weakened around 18% since Agbal was fired and that has to add surely at least 2ppts onto inflation. That would suggest that inflation peaks both higher and later, and indeed the market consensus is for inflation peaking at 18-19% and more likely in June, and then ending the year more like 14-15%.

Listening to him, and reading the report, the whole message is of inflation pressures from import prices, food and energy, a positive output gap, and also he showed a chart with credit growth bouncing back.

When he talks about keeping positive real rates, he is hoping that he is right and inflation does peak at 17%, then he does not have to hike beyond the current 19% rate.

This all seems like a fairy tale from Kavcioglu. Just not based on reality.

And if you listen to Kavcioglu’s now hawkish rhetoric, it will leaves us with the question why Agbal was fired, if the new governor is seemingly trying to promise the same medicine. What is different with Kavcioglu? And why was Agbal fired?

Things just do not add up. That’s the new reality, not the fairy tale.

(Please note that any views expressed herein are those of the author as of the date of publication and are subject to change at any time due to market or economic conditions. The views expressed do not reflect the opinions of all portfolio managers at BlueBay, or the views of the firm as a whole. In addition, these conclusions are speculative in nature, may not come to pass and are not intended to predict the future of any specific investment. No representation or warranty can be given with respect to the accuracy or completeness of the information. Charts and graphs provided herein are for illustrative purposes only).

The most remarkable message during the press briefing was “Under the current conditions, a tight monetary stance should be maintained decisively and patient until strong indicators point to a permanent fall in inflation outlook and inflation expectations”. In this respect, expectations for the timing of the first cut on the policy rate could shift towards to Q3/Q4 again which was backwarded to mid-year after the Governor replacement.

Governor Kavcıoğlu stated that YoY inflation could hit the 2021 peak around 17% in April then it could start to approach 12.2% gradually until the year-end.

We believe YoY inflation could reach the highest level in April or May in 2021, but upside risks dominates the CBRT’s forecasts on the peak level end year-end inflation when we take into account the recent Lira currency developments and potential additional cost-side pressures due to the recent lockdown and basis effect in addition to the current risks.

WATCH:  Should Turkey raise interest rates? Could she? | Real Turkey

Serkan Gonencler, an economist at Gedik Yatirim, called the central bank’s year-end forecast “optimistic” and below market forecasts, adding it did not fully acknowledge how much the lira depreciation has raised import prices.

Inflation is expected to top 17 percent this month and drop to only 14 percent by the year’s end, according to a Reuters news poll this week. Some analysts, including at Goldman Sachs, expect it to reach as high as 18 percent.