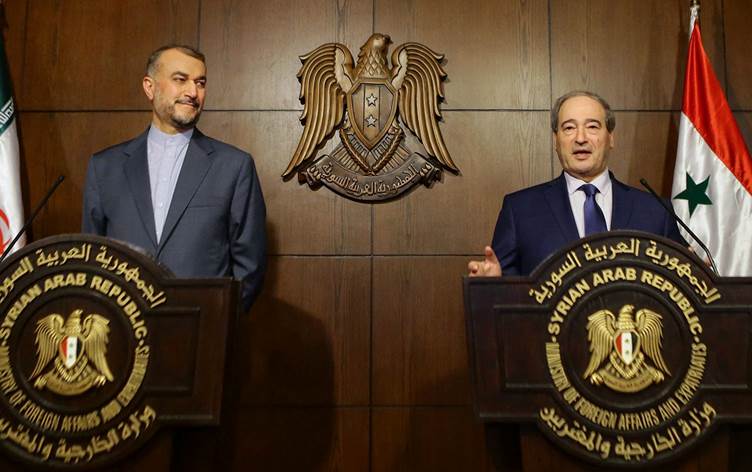 Syria’s foreign minister said Saturday that Turkish forces must be removed from Syria in order to agree on a presidential meeting between Damascus and Ankara, labeling their presence as an “occupation” during a meeting with his Iranian counterpart.

“We cannot talk about the resumption of normal ties with Turkey without removing the occupation,” Syrian Foreign Minister Faisal Mekdad told his Iranian counterpart Hossein Amir-Abdollahian during a meeting in Damascus.

Syria and Turkey severed ties in 2011 after Ankara provided heavy support to the political and armed Syrian opposition attempting to topple President Bashar al-Assad, supporting armed groups including hardline jihadists and sending its armed forces southward to carve out its own zone of influence against Assad and Kurdish forces.

Mekdad affirmed that a potential meeting between Assad and the “Turkish leadership depends on removing the differences that led to this dispute,” referring to the presence of Turkish troops in Syria and Ankara’s support for armed opposition factions.

Russia, a key backer of Syria, is heavily involved in potential rapprochement talks between Syria and Turkey, after a landmark defense ministers meeting between the three countries seemingly paved the way for further normalization talks with Turkish Foreign Minister Mevlut Cavusoglu saying on Thursday that a meeting with Mekdad could happen in February.

Amir-Abdollahian on Friday said he was “happy with the positive developments taking place between Syria and Turkey” a day before meeting Assad in Damascus, with Iran also being a key backer of the Syrian government to crush rebels in the country.
The Iranian foreign minister also met with Assad during his trip to the Syrian capital with the two agreeing on continuing economic cooperation, particularly in terms of energy.

On Friday, Assad said that the warming of ties with Turkey depends on Ankara’s will to withdraw from the country and cease its support for “terrorism,” a term used by the regime to refer to all opposition armed groups.

Ibrahim Kalin, a top advisor to Turkish President Recep Tayyip Erdogan, said on Saturday that a potential foreign ministers meeting between Ankara and Damascus could be preceded by another meeting of defense ministers while reiterating that a fresh ground offensive in Syria against Kurdish forces “is possible any time.”

The United States, a NATO ally of Turkey, has voiced strong condemnation to the idea of Turkey improving ties with Assad, with State Department spokesperson Ned Price calling him a “brutal dictator” while urging “states to carefully consider the Assad regime’s atrocious human rights record.”