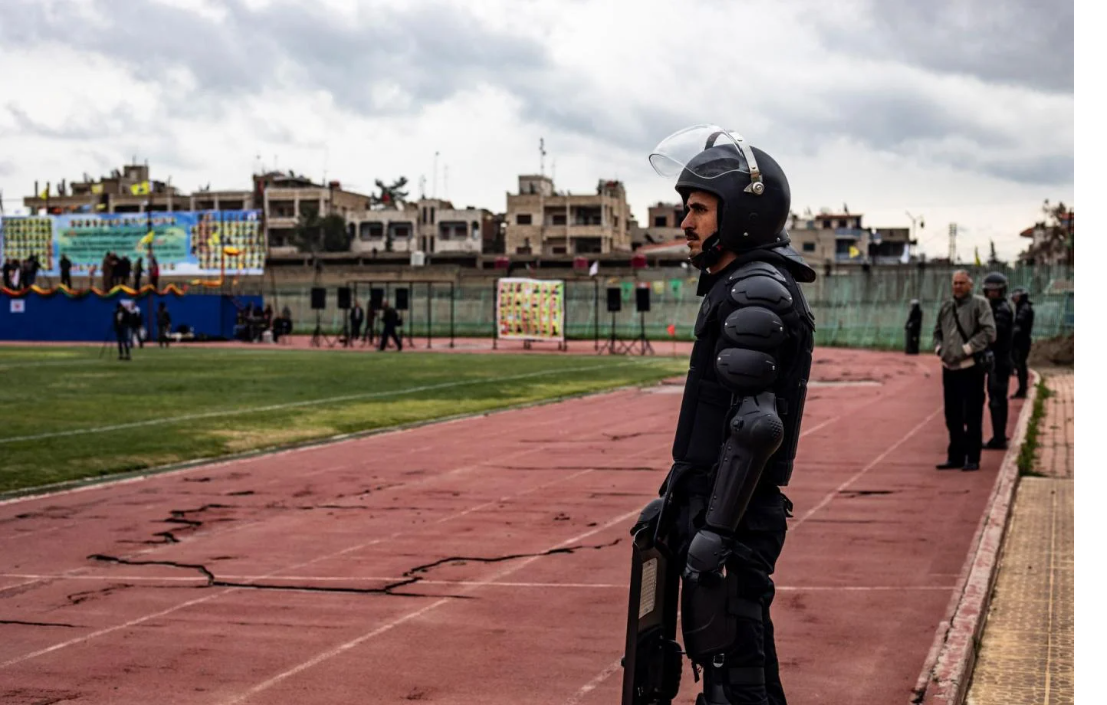 In a month, the US dollar appreciated about 13 percent against the Syrian pound,” Benjamin Fève, a researcher at the Syria Report, told the New Arab on October 11, as the Syrian pound dropped to a new low of SYP5,000 to the US dollar amid the continued devastation facing the debilitated Syrian economy. Prior to the outbreak of war in 2011, which has since ravaged much of the Arab nation, the pound was trading at less than SYP50 per dollar. “Of course, to this, you have to add the ever-deteriorating economic situation in Syria that continues to push down the value of the Syrian pound, which preceded the USD’s appreciation,” Fève added. But in a year of distinct transformation within the global geopolitical landscape, is there even a sliver of hope for a Syrian economic recovery?

The pound’s unprecedented weakness represents just one of many grim indicators that illustrate the extent to which Syria’s economic crisis has worsened this year, forcing import prices and living costs skyward as a bloody war that has raged on for nearly 12 years continues to render any chance of a sustained, enduring recovery hopeless. Indeed, with large swathes of the country still home to heightened military aggression involving several countries—including Turkey, the United States, Israel, Russia and Iran, not to mention the dozens of armed militant and terrorist groups that continue to sow deep unrest—the outlook for Syria’s economy remains bleak.

“We also see continued operations by Israel, as well as the U.S., Turkey and Iran-backed forces, in this protracted conflict,” Lynn Welchman, Commissioner of the United Nations Human Rights Council’s Independent International Commission of Inquiry on the Syrian Arab Republic, warned after the release on September 14 of a report detailing the human-rights situation in Syria, covering the first six months of the year. “Today, Syrians face increasing and intolerable hardships, living among the ruins of this lengthy conflict. Millions are suffering and dying in displacement camps, while resources are becoming scarcer and donor fatigue is rising,” Paulo Sérgio Pinheiro, chair of the Commission, added.

Indeed, the situation has become so desperate, Syria has to contend with a cholera outbreak, with 15,823 suspected cases reported, including 68 deaths, between August 25 and October 8, according to the United Nations Office for the Coordination of Humanitarian Affairs (OCHA). The 2022 Syria Humanitarian Needs Overview (HNO) from the United Nations High Commissioner for Refugees (UNHCR), meanwhile, estimated that more than 14.6 million people need humanitarian assistance inside Syria, including 6.9 million internally displaced Syrians. And of that number, around 9.6 million are in severe need of humanitarian assistance. “The 2022 HNO finds that economic deterioration is now a major driver of needs even in areas which have been less directly affected by hostilities and displacement,” the report added.

The economic outlook for ordinary Syrians has dramatically dimmed since around 2019 as a combination of factors have weighed heavily on purchasing power within the country, including the devastating economic crisis in neighbouring Lebanon, the imposition of crippling sanctions on the Syrian government by the United States and other Western nations, the continuation of hostilities across the country and the unfortunate surge of corruption being witnessed within the country. As the Syrian pound has markedly weakened since then, imports of necessities such as fuel and food have skyrocketed in cost. The situation has only further deteriorated since the onset of the COVID-19 pandemic in 2020, as well as with the surge in global inflation and the increasingly bearish economic environment that has emerged this year.

But it should not be surprising that the continuation of large-scale military warfare continues to destabilise the Syrian economy. It was more than a decade ago when conflict broke out in the country, quickly escalating into a full-blown civil war that saw a number of Western armies, forces from neighbouring countries, and militant and terrorist groups all descend on the country. According to the latest UN estimates, from March 2011 through March 2021, the Syrian conflict claimed the lives of 306,887 civilians, equating to an average of 83 civilian deaths every day for the entire decade.

But the ultimate failure to topple President Bashar al-Assad largely explains why significant unrest persists within Syria to this day, with many Western-backed forces refusing to cease their aggression whilst the current government remains in power. Indeed, Israel reportedly fired missiles into Damascus on October 21, thus marking the resumption of attacks after its airstrikes killed five soldiers on September 17. Israel has carried out hundreds of strikes against pro-Assad forces since the beginning of the conflict. “Our air defenses intercepted Israeli missile strikes in the airspace of Damascus and the southern region,” Syria’s official news agency, SANA (Syrian Arab News Agency), stated before Israel bombed the capital city on several more occasions in late October.

The war has also seen Turkish forces frequently cross the border into northern Syria and attack the Autonomous Administration of North and East Syria (AANES), the de facto government, often using drone strikes that have killed dozens of civilians this year, according to the local Syrian Rojava Information Center (RIC). Turkey has been mainly fighting militant groups and Kurdish rebels in the area, as well as supporting anti-Assad rebels in the northwest, where they hold large parts of the region. Hay’at Tahrir al-Sham (HTS), among the most effective anti-Assad groups consisting largely of former al-Qaeda militants (previously known as Jabhat al-Nusra), is widely believed to have received covert support from Turkey, despite being labelled a terrorist organisation by Ankara.

Internecine warfare has thus continued to rage in the north of the country. And although Assad’s forces, backed by Russia and Iran, have defeated the insurgency across much of the rest of the country, HTS currently holds the northern rebel-held Idlib governorate and recently took over the major city of Afrin from the rebel group Syrian Interim Government (SIG). “An escalation in hostilities in northern Syria this month has resulted in the deaths and injuries of civilians. We are very concerned for the wider population affected by the fighting, as well as further mass displacement of civilians,” the Office of the United Nations High Commissioner for Human Rights (OHCHR) stated on October 22. “We fear this latest rise in hostilities involving a number of parties, particularly Hay’at Tahrir al-Sham and some of the Turkish-affiliated armed groups, could spread and impact other areas in northern Syria, including Aleppo and Idlib.”

US forces, meanwhile, are currently occupying around one-third of Syria, specifically the oil-rich regions in the northeastern part of the country. While the official reason given by the Pentagon for this occupation is to prevent oilfields from being taken over by notorious terrorist groups such as ISIS (Islamic State of Iraq and Syria), President Assad’s government insists that the US is plundering the oil and taking it out of the country. According to local sources who spoke to SANA, 92 military vehicles loaded with wheat crops and oil from the Jazira Region crossed the border into Iraqi territories on October 17, while an additional convoy of 58 tankers carrying stolen oil was headed for northern Iraq through the illegal Al-Mahmoudiyah crossing.

And the Syrian Ministry of Oil and Mineral Resources has gone so far as to accuse US forces of stealing the overwhelming bulk of the beleaguered nation’s daily crude output. “The amount of oil production during the first half of 2022 amounted to some 14.5 million barrels, with an average daily production of 80.3 thousand barrels, of which 14.2 thousand are delivered daily to refineries,” the Ministry’s August 9 statement read, adding that “US occupation forces and their mercenaries steal up to 66,000 barrels every single day from the fields occupied in the eastern region”, equivalent to a whopping 83 percent of Syria’s daily oil production. Local media have also pointed to previous statements by former US President Donald Trump, made on several occasions when he was in power, that American forces were stationed in Syria to take its oil wealth.

On the opposing side, Russian forces have been present in Syria since around 2015 to support President Assad’s government. Its intervention has greatly strengthened support for the government’s forces and has been instrumental in Assad’s remaining in power. But the Office of the United Nations High Commissioner for Human Rights has observed that Moscow’s continued support for the Government of the Syrian Arab Republic has nonetheless resulted in airstrikes that have killed civilians and targeted food and water sources, including a well-known water station serving more than 200,000 people.

But for its part, the Syrian administration is unwavering in its view of where the blame lies. “The current chaotic state of the world—from wars to the spread of terrorism and climate-induced disaster—is the result of hegemonic, wealth-hoarding countries and their ambitions to subjugate others…. Syria knows only too well,” Syrian Foreign Minister Fayssal Mekdad said whilst addressing the United Nations General Assembly (UNGA) on September 26. Mekdad observed that those hegemonic countries have implemented “straightjacketed agendas”, invested in terrorism and “put economies in a stranglehold”, with no regard for international law.

He also noted that access to basic necessities such as food, fuel and medications in Syria continues to be undermined, berating the “smart sanctions” imposed by the US as a form of collective punishment and murder against people supporting the “wrong” homelands. Such sanctions can be found in the Caesar Syria Civilian Protection Act of 2019 (Caesar Act), approved by the United States Congress in 2019, which imposes punitive economic measures against President Assad’s government and any other entity engaged in significant transactions with Damascus.

Due to the West’s “economic terrorism”, Mekdad claimed, Syria had lost an estimated $107 billion in oil and gas revenues since 2011, leading to further economic woes. The minister pledged that Syria would continue seeking compensation for the lost revenues while “doing everything possible” to improve the humanitarian situation on the ground. The US’ actions have also drawn considerable condemnation from the international community this year. “We call on the United States to respect Syria’s sovereignty and territorial integrity, lift unilateral sanctions and end the theft of Syria’s national resources,” China’s Ministry of Foreign Affairs spokesman Wang Wenbin recently said.

So, is there even a modicum of hope that economic conditions can improve for Syrians in 2023? Possibly. But an end to hostilities within the country is paramount in facilitating progress. And there have been some signs that certain combatant nations are willing to soften their positions, including the United Arab Emirates (UAE) and Turkey. Indeed, Turkish President Recep Tayyip Erdoğan expressed his willingness to meet with Assad in September at a summit held in Uzbekistan. “I wish Assad had come to Uzbekistan; I would have spoken to him. But he can’t come there,” Erdoğan was quoted as saying by Abdulkadir Selvi, columnist for Turkish news publication Hürriyet. “He went to war with rebels to maintain his own power. He chose to protect his own power. He thought to protect the areas he controlled. But he couldn’t protect large areas.”

Reuters also reported on September 16 that four sources had confirmed that Turkey’s intelligence chief had held multiple meetings with his Syrian counterpart in Damascus as part of a Russian effort to achieve détente between the two sides.