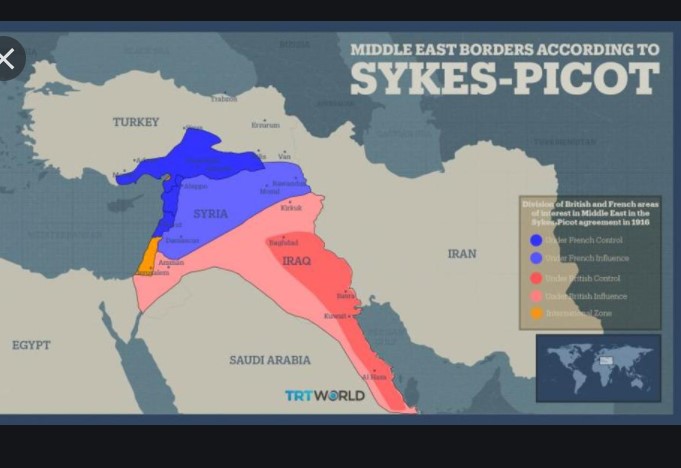 Once a shining beacon of soft power,  peace and prosperity, EU’s diplomatic skills have receded to the days of Sykes  and Picot, two post-WWI blue-blood diplomats who gifted us two never-ending civil  wars:  Iraq and Syria. After actively engaging –in ways which are completely self-serving and destabilizing—in regions– which are non of their business- such as Libyan tribal conflicts, the Aegean and Cyprus disputes between Turkey and Greece, some faceless EU functionaries now turned their beady eyes to Western Balkans, a powder keg where wounds of ethnic hatred and ethnic cleansing since the forced departure of  Ottomans throughout the 19th Century (guess who was the mid-wife? European powers of course), opened  deep wounds which can only be healed by time, peaceful co-existence and international intervention enforcing peace and the sanctity of existing borders.

Guess what EU was up to?

“Germany rejects a redrawing of borders in the Western Balkans along ethnic lines and the idea has been “put back into a drawer”, Foreign Minister Heiko Maas said on Thursday”, according to Reuters. (Well, Heiko should know a thing or two about redrawing borders, Nein?)

The idea was raised in an unofficial European Union diplomatic note that alarmed Bosnians, who saw it as a threat to their country’s territorial unity, two decades after ethnic conflicts led to war in the region.  (Editor’s Correction:  Two decades after Croatians and Serbians ruthlessly slaughtered innocent and unarmed Bosnians).  The rumor reached Turkey, where it was perceived by Erdogan administration and the pan-Turkist community  as yet another Christian Crusade executed by pen. Alas, this time they were proven right.

The note, seen by Reuters, suggested that creating a Greater Serbia, a Greater Albania and a Greater Croatia could help resolve national tensions holding up EU integration in the region. Yes, regional tensions usually do disappear when the troublesome minority is ethnically cleansed.

A diplomat in Brussels said EU member states had not discussed the idea. “The idea that things can be solved with new lines on a map is not only unrealistic, but it is dangerous to even initiate this discussion,”  Maas told reporters in Pristina, the capital of Kosovo.

“The idea of a shifting of borders is one that the German government vehemently rejects,” he said, adding that he was happy that the idea had been “put back into a drawer or hopefully the shredder of history”.

The EU diplomatic note was first leaked to Slovenian media. Slovenian Prime Minister Janez Jansa denied media reports that he had sent it to European Council President Charles Michel, who chairs EU summits, as a proposal on how to deal with the region after Slovenia takes over the EU presidency in July.

Ethnic tensions in former Yugoslavia worsened after the death of long-time leader Josip Broz Tito in 1980, culminating in the Yugoslav federation’s collapse in 1992 and the Balkan wars of the 1990s. Some 100,000 people were killed in Bosnia, where Serbs and Croats sought to form their own ethnic statelets.

Note the irony. Christian oppressors are in, Moslem victims in the waiting room.

I recommend a bold  idea to broaden the EU non-plan and whittle the number of useless, tiny states which eat up UN budget:  A Greater Turkey encompassing Turkmeni lands in Syria and Iraq, Turkish majority districts in Greece and Bulgaria, as well as Northern Cyprus Turkish Republic, which as the names suggests IS 100% Turkish!

Why stop there?  How about a Mega-Greater Turkistan consisting of a loose federation between Turkey, Azerbaijan and   Turkmenistan, countries with 110% Turkish populations, who would tell your face that they are Turkish and proud to be so.

By the way, membership will be voluntary, with Turks and Caicos  Islands being invited as an observer or a territory with an option to join later by public plescibite.