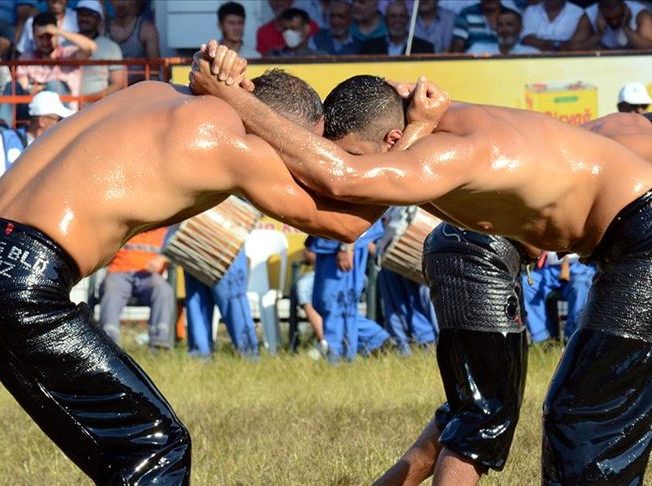 EDIRNE, Turkey (AP) — After a year-long, pandemic-induced hiatus, the sounds of the zurna flute and beating drums again greeted thousands of Turkish wrestling fans who returned to the country’s northwest for a 600-year-old oil wrestling championship.

Last year’s contest was canceled because of the coronavirus pandemic. But spectators headed in droves to Edirne province on the Greek border over the weekend to watch a sport that dates to the 14th century.

Over three days, competitors clad in leather trousers known as “’kispet” and liberally doused in olive oil struggled to earn the title of Baspehlivani, or chief wrestler, the sport’s equivalent of world champion.

This year’s tournament, the 660th to be held, saw Ali Gurbuz from the Mediterranean province of Antalya retain his title after a 48-minute bout with Ankara’s Ismail Koc on the grassy square.

The triumphant fighter was held aloft on the shoulders of fans for the crowds to acknowledge his achievement as the zurna flute and drums played on. This is Gurbuz’s fourth “golden belt” following victories in 2011, 2012 and 2019.

Around 3,000 wrestlers had taken part in this year’s tournament on a field in Edirne’s Sarayici.

Edirne Mayor Recep Gurkan said championship organizers adhered to all health guidelines and restrictions to keep fans and wrestlers as safe from the spread of COVID-19 as possible.

“Of course, oil wrestling has its own disciplines, traditions, customs and traditions,” Gurkan said. “By God’s (will), we will finish the 660th Kirkpinar oil wrestling on this day and perform all the rituals one by one, without skipping any.”

The festival, one of the world’s oldest wrestling events, was listed as an intangible cultural heritage event by UNESCO in 2010.