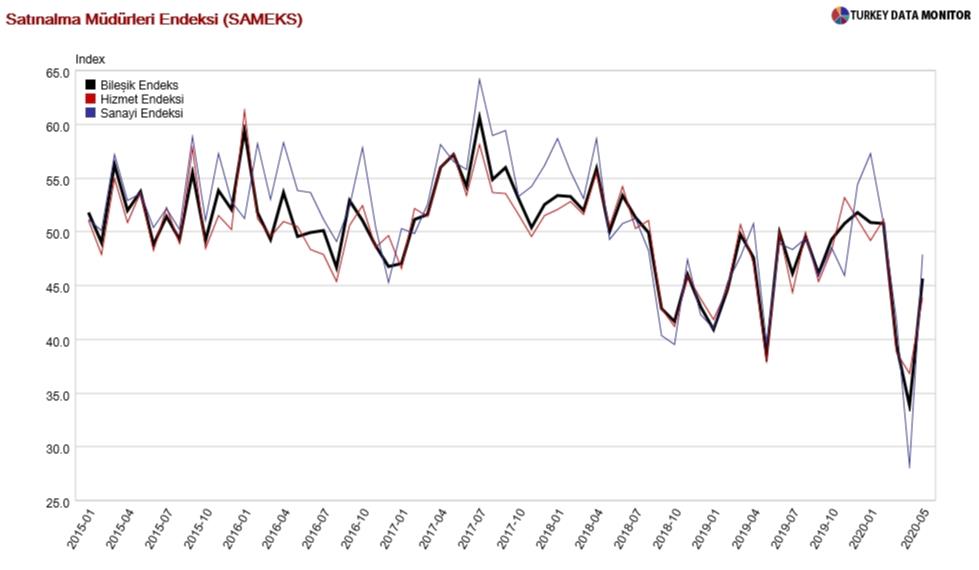 In May 2020, seasonally and calendar adjusted SAMEKS Composite PMI Index increased by 11.8 points to 45.7 compared to the previous month. SAMEKS, or sometimes referred to as PUMAKS, is compiled by center-right business organization MUSIAD and has the advantage of including Turkey’s large service industry. The HIS Markit-Istanbul Chamber of Industry PMI covers only manufacturing.

While the increase in the industry index reached 19.7 points to 47.9  in May compared to the previous month, the service sector index increased by only 7.0 points to 43.9.

A rapid expansion in input purchases were observed  in both sectors. Accordingly, production in the industry sector and business volume in the service sector have accelerated significantly. With these positive developments, the Index rapidly moved away the worst level in its history observed in April. On the other hand, the SAMEKS Composite Index, which signaled that the recovery process in the real sector gained momentum by increasing 11.8 points compared to the previous month, continued to remain  below 50 reference value in May, which indicates that the shrinkage in economic activity which started in March continued.

The crisis caused by Covid-19 pandemic is  resonating in all aspects of the global economy. Through both supply and demand  channels, it is also hitting  Turkey’s economy, though the impact has moderated relatively as of May. In this period, increases in manufacturing industry capacity utilization, real sector confidence index and sectoral confidence indices were observed, while SAMEKS, which moved away from its historical bottom  rapidly. All of these indicators confirm the recovery in the real sector. The positive effects of government supports and incentives received by the economy exceeding TL 260 billion are becoming more evident in the normalization process that will start in June and afterwards. This trend of recovery is expected to become more pronounced in the second half of  the year, as Turkey’s economic activity is projected to turn positive quickly.