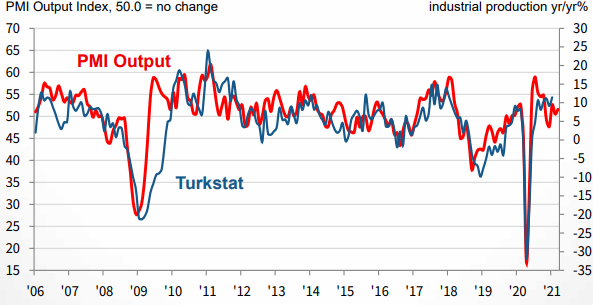 The latest PMI® survey data from Istanbul Chamber of Industry and IHS Markit showed the headline PMI rose to 52.6 in March from 51.7 in February, and signalled a solid improvement in the health of the sector. Business conditions have now strengthened in ten successive months. Sustained growth of output and employment in the manufacturing sector was observed as new orders showed signs of improvement.

Details of PMI data show that export demand is increasing, while domestic demand remains strong. Agbal, the former head of the central bank, who was committed to lowering inflation hence raised the interest rate by another 200 basis points in March, explains how right he was by looking at the power of domestic demand reflected in the PMI data.

The trends in domestic and foreign demand growth cause prices to rise when supply shortages are combined. Therefore, March inflation is likely to be above expectations. On the other hand, the loss in the value of TL and its volatility in the last two weeks may slow down the growth of domestic demand in the coming months, and may reflect on PMI data.

Below are the PMI deteails for March 2021:

Panellists reported signs of improving demand, while new export orders rose for the third month running and at a faster pace than total new business.

Higher new orders and the addition of new production lines supported an increase in output, the third in as many months. The rate of expansion quickened slightly, but there were some reports that raw material supply shortages had prevented a stronger increase in output.

These supply difficulties were highlighted by a further steep lengthening of suppliers’ delivery times. Lead times increased to a greater extent than in February, with global freight cargo issues exacerbating supply shortages of raw materials.

Supply shortages also added to inflationary pressures at the end of the first quarter, with currency weakness contributing to the fastest increase in input costs in the year-to-date. Similarly, output prices rose to the greatest extent since December, after the rate of inflation had slowed to a ten-month low in February.

Turkish manufacturers continued to expand staffing levels at a solid pace in March. Employment has now risen in each of the past ten months, with investment, new production lines and higher output
requirements all mentioned as factors supporting job creation.

Purchasing activity was also up, reversing a slight slowdown recorded in February. Difficulties obtaining raw materials, however, undermined efforts to build stocks of purchases, which fell at the fastest pace in three months.

“The Turkish manufacturing sector managed to secure renewed increases in new orders and expand both output and employment again in March, despite facing some substantial headwinds. The increasingly familiar problem of difficulties obtaining raw materials affected suppliers’ delivery times, inventories and input costs, while acting to restrict growth of production. Inflationary pressures were exacerbated by currency weakness. Firms will be hoping that some of these headwinds start to ease in the months to come so that growth in the sector can start to build momentum.”