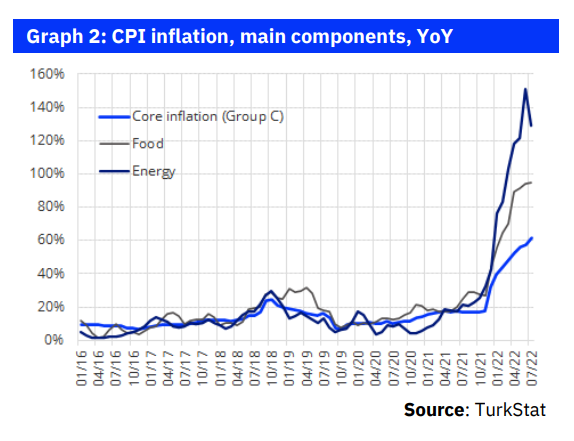 CPI inflation at 2.37% comes well below market expectations in July, but rises further to 79.6% in YoY terms

Food inflation came well below our projection, which explains the deviation in our estimate

The deviation in our headline CPI inflation expectation mainly stems from food inflation, which at 3.2% turned out to be well below our projection of roughly 7%, and to a lesser extent from services inflation, which was 3.2% vs. our 3.8% estimate. In fact, we have been witnessing significant hikes in fruit-vegetable prices over the past few weeks, which along with the ongoing hikes in processed food prices is likely to keep August food inflation at a significantly high level as well. We expect YoY food inflation, which has risen to 94.6% in July from June’s 93.9%, to exceed 100% within a few months’ time.

Meanwhile, energy inflation was -3.2%, broadly as expected, as a result of the cuts in gasoline and diesel prices, which would also favourably impact August inflation.

Yet, we are likely to witness further hikes in electricity and natural gas in 4Q, making a material contribution to inflation. CPI inflation may soon test 90%-ish levels. We expect the rising trend in CPI inflation to linger (at least) until October/November and test levels close to 90%. This is due to the ongoing secondary effects of food and energy inflation, and the ongoing cost-based pressures, as particularly suggested by the TL’s depreciation and the D-PPI inflation, which increased to 144% YoY (and is likely to rise further). In our base case scenario, we assume Brent oil price at USD95/bbl and the USD/TL rate at 18.75 at end-2022, as the rise in the currency is constrained via the issuance of an inflation-protected debt instrument (or a product alike).

Under such an outlook, we would expect end-2022 CPI inflation at around 71.5% after reaching 85-90% levels by October/November.

Yet, we should note that the formation of an exchange rate-inflation-wage spiral, apart from the uncertainty of energy prices, may actually pose additional inflationary pressure and lead to a higher plateau. In another scenario, where Brent oil price and USD/TL rate rise to USD115/bbl and 20.25 at end-2022, we would expect CPI inflation to test 95-100% levels by October/November before ending the year at about 82%. Recall that the CBRT at end-July had revised its end-2022 CPI inflation estimate by 17.6% points to 60.4% from 42.8% in April and 23.2% in January.