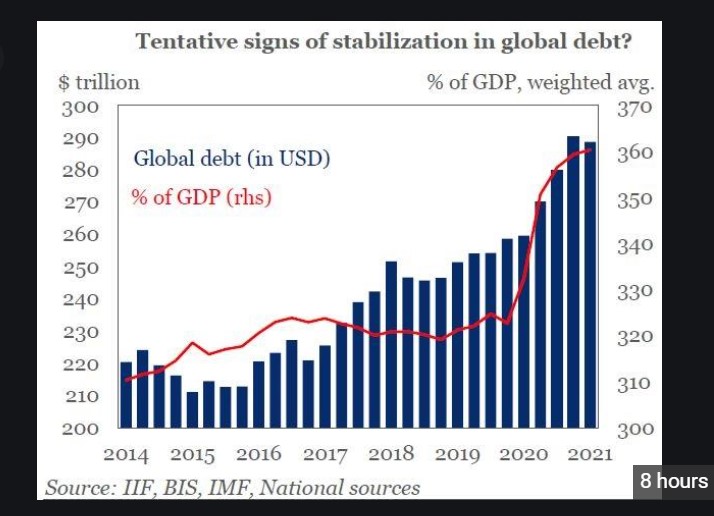 (Reuters) – Global debt levels declined for the first time in 2-1/2 years in the first quarter, driven by a fall in developed markets, but indebtedness across developing economies hit a fresh record, the Institute of International Finance (IIF) said on Thursday.

Total global debt fell by $1.7 trillion to $289 trillion with financials accounting for nearly half of that decline while government indebtedness continued to increase.

In contrast, emerging market debt levels rose by $600 billion to a fresh record high of over $86 trillion, though at a significantly slower pace the previous three quarters. This was due to a slower rise in emerging government debt largely due to fiscal constraints.

Despite lower global debt levels, debt ratios continued to rise as economies struggled to recover to pre-pandemic levels in many parts of the world.

On a global level, debt to GDP rose by just one percentage point in Q1 2021 to just over 360%, and ratios are expected to dip slightly this year due to global issuance falling below pre-COVID-19 levels and the projected economic recovery. Last year, global debt-to-GDP ratio had jumped by more than 36 percentage points, the IIF said.

Across emerging market sovereigns, the debt-to-GDP ratio rose to near 60% from 52% before the pandemic. While near-term vulnerabilities had eased, governments still felt the pressure from continued lockdowns and slow vaccination progress in many economies, the IIF said.

Emerging markets were also under increasing pressure to speed up their transition to lower carbon economies and failing to do so could ramp up governments’ borrowing costs.

“A 10 percent increase in climate vulnerability is estimated to increase EM sovereign spreads by 100 basis point on average,” the IIF calculated.