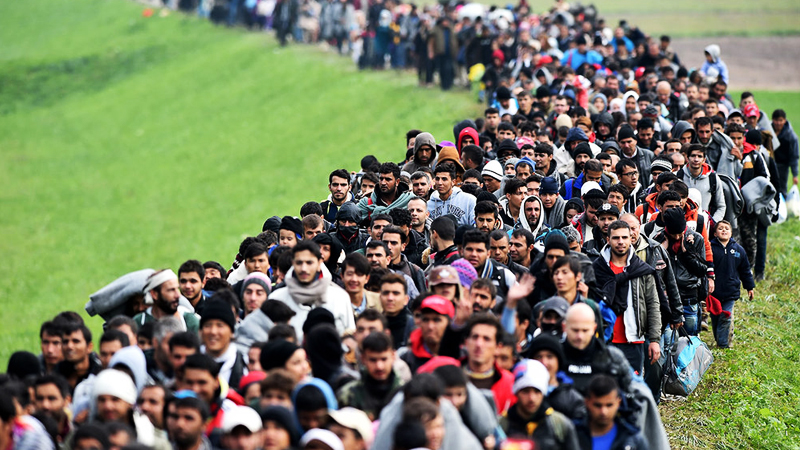 1- Have you requested asylum seekers to prove their real identity information?

2- Why are you granting citizenships recklessly, what are you preparing for?

3- Do you conduct a security investigation while granting citizenship?

4- Why do you knowingly allow illegal crossings through our border?

Other opposition party members have been asking similar questions for a while too. There were two main concerns underlying these questions. The first is that terrorists who hide their identities along with Syrian refugees enter Turkey and settle. The second is the claim that the AKP will gain a vote advantage in 2023 by turning immigrants into voters. The Syrian population was large enough to change the demographic structure, especially in the southern provinces.

Speaking at the fast-breaking dinner given to diplomatic representatives in Ankara on the evening when Kılıçdaroğlu, who has based his rhetoric on Syrian refugees over ensuring their “honorable and safe back to Syria,” hung that banner at the party headquarters, the President said the following sentence:

However, the same Erdogan said the following about Syrian refugees just a month ago:
“(Kılıçdaroğlu) says “when we win the election, we will send the refugees to their countries”. We will not send them back.”

After Erdogan said so, nationalist Victory Party (ZP) leader Ümit Özdağ, launched the “Send them immediately” campaign, causing an uproar in the nationalist and idealist segments. For this reason, ZP faced a closure threat on the grounds of hate speech.
But after these discussions, AKP’s ruling alliance partner Nationalist Movement Party (MHP) leader Devlet Bahçeli came to the forth on policy setting on the issue of refugees.

Addressing his party’s parliamentary group on April 19, he said, “Irregular migration is turning into an invasion” and added “Syrian asylum seekers who can go to their country on the upcoming holidays do not need to return again.”

Eid visits as a rhetoric

Recently, historian and a popular public figure İlber Ortaylı gave the example of Germany: “(In that time) Asylum seekers could not travel to their countries and back as if they were having a picnic. Those who could go to their countries were losing their right to seek asylum.”

What they refer to was the popular rhetoric of anti-asylum seekers which points to Syrians going to their country and coming back during the Eid holidays. They argue if they can enter their country safely without an issue, then their asylum-seeking would be invalid. According to the data of the General Directorate of Migration Management under the Ministry of Interior, 3 million 684 thousand 412 Syrian refugees live in Turkey. In 2019, the number of Syrians who went to and from their country for Eid was around 38 thousand.

It seems that both Erdogan and Bahçeli have come to a point where they agree on what Kılıçdaroğlu has been saying for years. The CHP leader realized that and he said “We are feeding 3 million 800 thousand Syrians. He (Erdoğan) must have made a survey and saw that the people were against their policy,” at his party’s parliamentary group meeting on April 19.

“This shows that CHP is the party that is aware of the wishes of the people and does not practice racism,” he added.

The economic and international dimension

There is one more detail. Mehmet Özhaseki, Deputy Leader of the AKP -the former Mayor of Kayseri and Minister of Urban Planning- said, “If the refugees leave, the economy of most cities will collapse”.

This meant that some employers, who avoided paying the minimum wage and paying taxes to Turkish citizens, wanted to employ refugees from Syrian, Afghan and African countries like slave workers, and the AKP turned a blind eye to this. Is it a coincidence that Baki Ersoy, who resigned from the MHP after being disciplined for complaining about financial difficulties, is also a Kayseri deputy? Unemployment and financial difficulties of the base seem to have spoiled the calculations on the side of the government.

Well, behind this change of rhetoric of the AKP-MHP, is it only the reactions from their grassroots to the policy of refugees? International developments also have a role in this. The Ukraine Crisis, which started with the invasion of Russia, changed the whole atmosphere of international relations. It caused the USA to give signs of convergence to Turkey, as its strategic interests required it. After the F-16, there are signs of change in the policy regarding the F-35. Russia, on the other hand, does not seem likely to give up on a country like Turkey within NATO.

These developments will sooner or later find their reflection in Syria. In this environment, Turkey’s launching a new operation against PKK camps in Iraq under the name of “Claw-Lock” is an example. Erdogan’s policy on Syrian asylum seekers may be coming to an end.

Nevertheless, in this change of policy of Erdoğan, the role of opposition leaders’ insistence, especially Kılıçdaroğlu’s, cannot be denied.