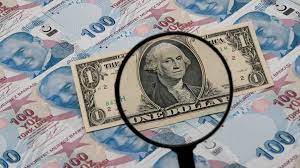 Central banks’ longstanding strategy of hiking interest rates to defend currencies is failing to work its magic in emerging markets this time.

A gauge of developing-nation currencies has sunk to the weakest level since March 2020 relative to average local-bond yields. That suggests investors are discounting the appeal of rising interest rates, fretting instead over the toxic combination of slower global growth and faster inflation.

As a supply crunch rips through their economies, firing up consumer prices, emerging-market central banks are rushing to minimize the damage with higher rates. But that also risks choking off a fragile recovery from the pandemic-driven slowdown. That dilemma will resonate with policy makers in Russia, Indonesia, Turkey and Hungary this week as they decide on rates. 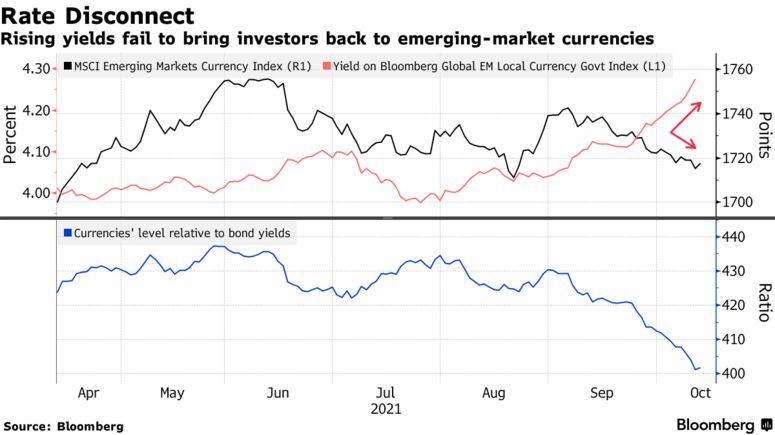 “It is a delicate balancing act between limiting the blow and not over-tightening when global demand is clearly past its peak,” said Witold Bahrke, a Copenhagen-based senior macro strategist at Nordea Investment. “Hiking at an even faster pace would risk an outright double-whammy to emerging economies.”

Central banks are finding out that rate increases alone won’t bring back investors when growth is a question mark. Brazil’s real has plunged 4.2% since Sept. 22 when its policy makers raised their benchmark rate. Poland’s zloty has lost value both against the euro and dollar after borrowing costs were lifted Oct. 6. The Czech koruna is also lower since a Sept. 30 increase.

Emerging economies are expected to post a combined growth of 6.5% in 2021, recovering from a 0.6% contraction last year. However, that would narrow their growth lead over developed economies to 1.2 percentage points, from 3.1 percentage points. Some investors see this narrowing gap as damping the case for buying riskier assets.

Developing nations have already lost their growth advantage during Covid-19 lockdowns, as they provided much smaller stimulus packages to their economies than the U.S. or Europe. Now the rate hikes threaten to erode economic expansion even further.

China on Monday reported weaker growth in the third quarter as property and energy crises hurt the economy. Gross domestic product expanded 4.9% from a year earlier, down from a previously reported 7.9% in the preceding quarter and compared with a median forecast of 5% in a Bloomberg survey of economists.

Against this backdrop, some investors are betting on relative-value opportunities, focusing on those emerging economies that have managed an optimal mix of growth and inflation control. Fidelity International Ltd. prefers Russia and Brazil, where price gains are seen to be near their peaks. On the other hand, it avoids central European countries on grounds inflationary pressures may persist into early next year.

“We like the bond markets where we feel central banks are ahead of the curve on inflation and are already well into a tightening cycle,” said Paul Greer, a London-based money manager at Fidelity.

So, what makes an ideal emerging market in these turbulent times? Most investors say Russia has the answers.

The nation has a widely respected central banker in Elvira Nabiullina, whose determination to fight inflation is common knowledge in markets. It also has a current-account surplus and one of the world’s biggest piles of foreign-exchange reserves. And when the windfall from oil-price surge is added to the mix, investors begin to see the ruble as irresistible. The currency has gained almost 2% this month and is the best performer this year in emerging markets.

Goldman Sachs Group Inc. strategist Ian Tomb said long ruble is the bank’s preferred trade on upside from oil prices, but that wasn’t the currency’s only attraction. “A range of factors including advantages in carry and external balances support our continued preference for the ruble,” he wrote in a note.

These are the events and data to look out for this week: