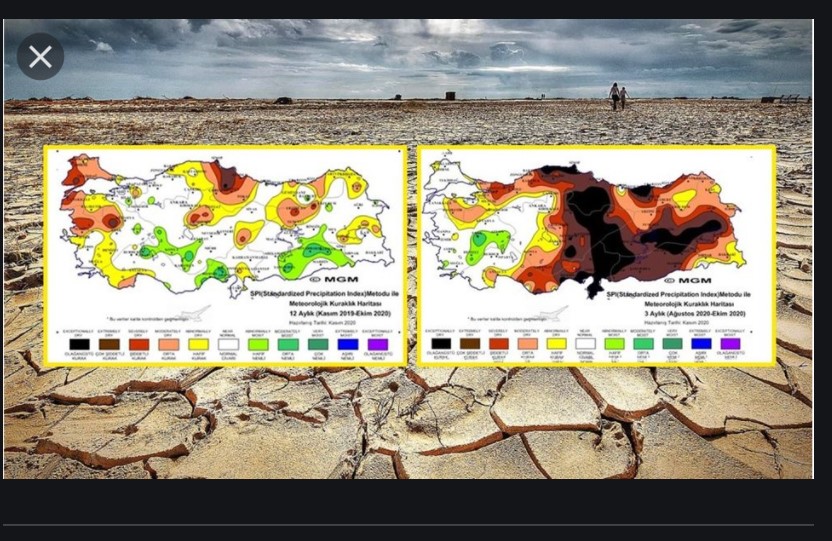 Turkey experienced this year the third warmest winter in the last 50 years after 1971 and 2010, the state-run Anadolu Agency reported on March 25. The severe draught comes at a time when Turkey is battling a very sticky case of food price inflation, as global foodstuff price rise.

According to data obtained from the Turkish State Meteorological Services, the seasonal temperatures for the three months of winter – December, January and February – have been measured 3.6 degrees Celsius for years. However, the average winter temperatures were recorded as 6.2 degrees Celsius this year.

The Marmara, Aegean and Mediterranean regions out of the country’s seven regions witnessed high temperatures above the seasonal norms throughout winter.

The highest temperatures in Marmara were measured in the province of Sakarya at 26.5 degrees Celsius.

The province of Manisa’s Salihli district was recorded as the hottest place in the Aegean region, with an average temperature of 26 degrees Celsius.

The hottest winter in the Mediterranean region was witnessed in the province of Antalya’s Dalaman district at 26.6 degrees Celsius.

The temperatures in the other four regions were around the seasonal norms, the figures showed.

The eastern province of Ağrı broke a record at -34.5 degrees Celsius as the coldest province across the country in winter.

Meanwhile, the cold weather that took hold on Turkey’s metropolises with surprise snowfall on March 24 continued through March 25.

A blanket of snow-covered Istanbul’s populated eastern and central districts, including higher ground on the city’s Asian side. Morning rush hour traffic came to a halt for a short time in the central parts of the metropolis.

According to the Turkish State Meteorological Service, snowfall will end in Istanbul, Ankara and İzmir as of March 26 and rainfalls will be seen.

The three provinces will warm back up this weekend, with temperatures rising to 5 degrees Celsius from current levels fluctuating around zero degrees Celsius.

The cold weather will leave the western parts of the country, but the precipitations will continue in the eastern provinces, officials said.

“The eastern provinces will experience snowfall again as of March 26. There is a risk of avalanche in these provinces,” officials warned.

Meteorologists also warned residents of the Mediterranean and the southeastern provinces of the possibility of floods, whirlwinds, or lightning.

has been under the deep effects of drought due to misuse of existent water sources, a staggering amount of waste that accounts for 60% of total water use, climate change and differing rainfall regimes, an academic from northern Ondokuz Mayıs University (OMÜ) said in a statement to Ihlas News Agency (IHA) on Sunday.

Yusuf Demir said that “re-understanding” and “recognizing” water is crucial.

Speaking on World Water Day, Demir said that winter and summer droughts and changes in rainfall regimes have become important parameters for future planning around the world.

“Unfortunately, freshwater bodies are very limited on our Earth, and freshwater is not distributed equally among the nations and continents. According to the recent figures announced by UNESCO and the United Nations, more than 2 billion people around the globe do not have access to freshwater, and around a billion people are deprived of clean drinking water,” he said.

Worrying statistics show that water per capita has decreased by 18% in the last 20 years in Turkey, with current measurements showing that it falls between 1,000 to 1,700 cubic meters. According to the Falkenmark Index, also called the “water stress index,” Turkey can be classified as a country experiencing water scarcity. To make matters worse, projections for 2030 say that this amount will fall further in line with the rise in population, which is expected to reach 100 million, with only 1,120 cubic meters of water being available per person.

Drought is already stressing food prices, according to data by Turkstat.  The report shows   some of the most important staples have registered price increases almost twice as fast as CPI, and nominal disposable income growth:

Price of tomatoes (for table) increased by 4.46% compared to the previous year

Price of hazelnuts increased by 32.35% compared to the previous year