Turkey is heading toward a set of twin elections that could have momentous consequences for the country’s future. In June 2023 at the latest, Turkish voters will be asked to choose a new president and a new parliamentary majority. For the past two decades, the Turkish political landscape has been dominated by the Justice and Development (AK) Party and its uniquely successful leader, Recep Tayyip Erdoğan. After having ruled the country single-handedly since 2002, Erdoğan became the first executive president of Turkey in 2018, following a tightly contested constitutional change. He has come out victorious in every round of elections since the start of his political career. And yet, after two decades, his popularity is faltering, raising the prospect of political change.

The turning point for Turkey’s political system has been the transition to a presidential
system with the constitutional amendment of 2017.

Since the start of multiparty elections in 1946, Turkey had had a parliamentary system, and since 2002 it has had single-party governments. With Erdoğan at the helm, the AK Party has won nearly all elections over the past two decades. It only failed to win a parliamentary majority in the most recent elections, in June 2018, and since then has been forced to rely on the support of the hyper-nationalist
Nationalist Movement Party (MHP) to secure control of the legislature.,

The transition to the presidential system forced a realignment of the political constellation.
The structural impact of this transition has led to the creation of two major political alliances. The Cumhur, or People’s, Alliance is led by the AK Party and includes the MHP and a small number of marginal parties. The Millet, or Nation, Alliance is led by the main opposition, the center-left Republican People’s Party (CHP); it also includes the center-right/ nationalist İYİ Party as well as the Saadet and Demokrat parties, which appeal to a smaller electoral base.

The first real test of this alliance-based politics was the municipal elections of March 2019, where the opposition alliance performed markedly better. Millet-backed opposition candidates won the electoral race in nine out of Turkey’s ten major metropolitan cities, including Ankara and Istanbul. These cities had been ruled by mayors linked to the AK Party and its predecessors since 1994.

Now the alliances are gearing up to contest the critical 2023 elections. The ruling Cumhur Alliance’s candidate will be Erdoğan, who will try to win a third term as Turkey’s president.

The candidate of the Millet Alliance is still unknown. Kemal Kılıçdaroğlu, as the leader of the main opposition party, is intent on becoming the Millet candidate, but there are doubts about his electability against Erdoğan. Meral Akşener, the chairwoman of İYİ—the secondlargest opposition party—has so far sidelined herself from the presidential race. Ekrem Imamoğlu, the mayor of Istanbul, and Mansur Yavaş, the mayor of Ankara, are also possible presidential candidates for the opposition. At present, all four potential candidates for the opposition are polling better than Erdoğan—fueling speculation about political change. 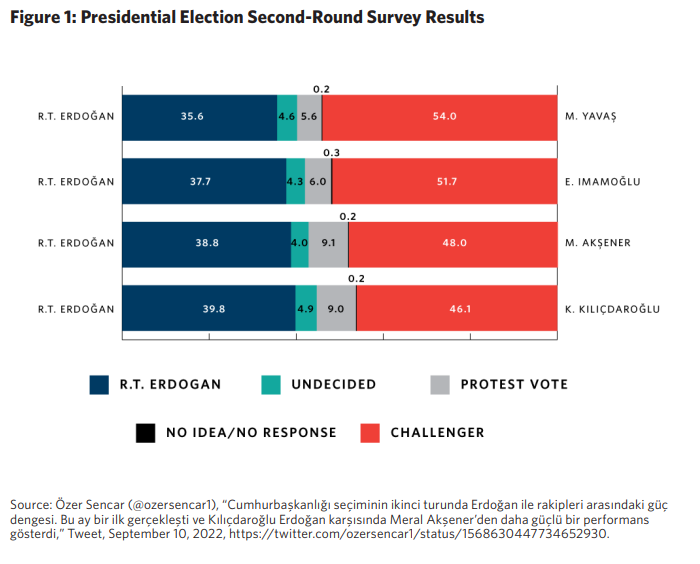 A similar picture is emerging in the parliamentary race. According to the September 2022 survey of Türkiye Raporu, support for the AK Party is at the historic low of 22.2 percent (excluding undecided voters). The CHP is second with a support level of 20.5 percent. Afterthe undecided voters are accounted for, the AK Party vote rises to 29.7 percent, with the CHP at 27.2 percent and the İYİ Party at 16.7 percent. The AK Party’s parliamentary ally, the MHP, is at 7.4 percent. 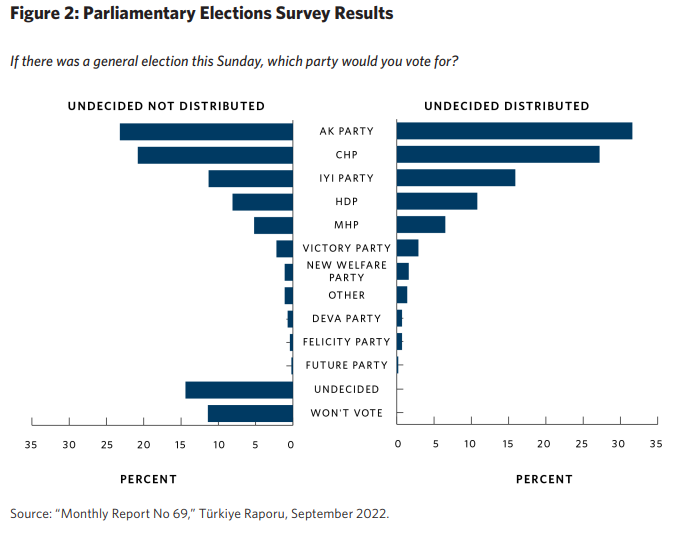 Aside from specific candidates, general political trends also look ominous for the ruling party. The AK Party–led People’s Alliance has been steadily losing ground against the CHP– İYİ Party Nation Alliance. Support for the People’s Alliance dropped to 27.6 percent in June 2022 from 43 percent in November 2019. The Nation Alliance was calculated to be ahead by four points at 32.3 percent. But the gap is in reality much wider, as the pro-Kurdish Peoples’ Democratic Party (HDP), which is polling at 8.8 percent is also likely to support the opposition candidate in the presidential election. 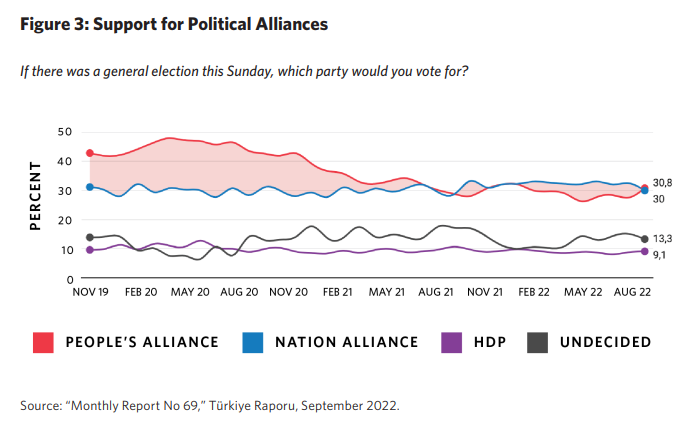 The economy is the primary reason for the widespread disenchantment with the ruling party and Erdoğan. The Turkish economy is under duress; consumer inflation has reached 80 percent.

Unanchored inflation undermines the standard of living of ordinary citizens. Perceptions about the state of the economy, as illustrated by the polling of Türkiye Raporu, have consequently worsened to unprecedented levels, with 53 percent of the population stating that the economy was “bad” or “very bad.” 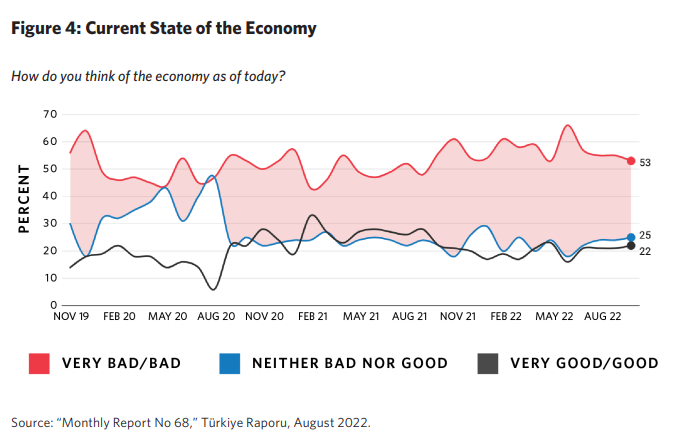 Expectations for the outcome of the 2023 elections are taking form against this political and economic backdrop. A potential leadership and government change would have major ramifications for Turkey and its foreign policy after two decades of AK Party rule.

This analysis aims to shed some light on Turkey’s postelection foreign policy orientation in the event of political change and provide insights on how a non–AK Party government and leader in Turkey would reshape the country’s foreign policy. A major difficulty in this respect is the prevailing uncertainty over the presidential candidate of the opposition alliance and the setup of the postelectoral Parliament. The main opposition parties will seek to maintain their alliance to contest the parliamentary race, possibly extending it to others, like the Democracy and Progress Party (DEVA) (headed by the former economics and foreign minister Ali Babacan) and the Gelecek Party (headed by the former prime minister and foreign minister Ahmet Davutoğlu). And yet given that no single party is likely to obtain a majority in Parliament, the opposition will need to establish a postelectoral coalition. As a result, this inevitably premature analysis of Turkey’s future governance envisages a complicated political setup should there be political change after the elections, with an executive president and a Parliament ruled most likely by the political coalition of the CHP and the İYİ Party, given their much stronger voter base.

Our adopted methodology has been to interview the foreign policy spokespeople of the opposition parties—the CHP, the İYİ Party, DEVA, Gelecek, and the HDP—enabling a comparative analysis of their approaches on specific topics and a contrast of their policy preferences with those of the AK Party.

The topics addressed are relevant not only for Turkey, but also for the region and beyond. This paper will summarize our findings and help illuminate the foreign policy agendas and priorities of the different parties composing Turkey’s political opposition, which should in turn provide a better understanding of the dynamics that shape Turkish foreign policy. The first section reflects the main critical points raised by the interviewees on the AK Party–led foreign policy of the last two decades.

The following sections are categorized under specific themes and cover the commentary and recommendations of the opposition on Turkey’s relations with the United States, the North Atlantic Treaty Organization (NATO), the European Union (EU), and Greece, as well as with non-Western actors like Russia and China. Also included are their policy proposals on major issues like the Eastern Mediterranean, Cyprus, Syria, and refugees. The final section provides a critical analysis underscoring the limits of our adopted approach of seeking to draw conclusions on the future of Turkish foreign policy at a time when uncertainties remain, not only about the postelection political leadership of the country but also about the cohesiveness of future policymaking.

The full report is here.