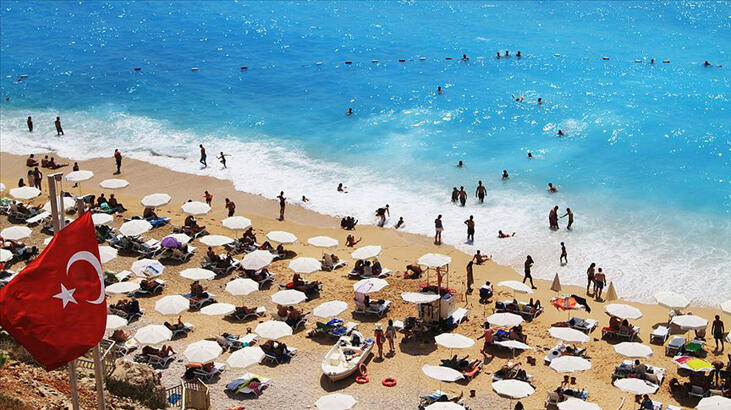 Turkey has attracted over 23 million international visitors in the first seven months of the year, an annual surge of 128.28 percent.

The foreign visitor arrivals in Turkey jumped 53% in July from a year earlier, exceeding pre-pandemic levels and paving the way for $37 billion in tourism revenues sought by the government in support of President Erdogan’s unorthodox economy policy.

The international visitors to Turkey leapt to 6.67 million in July, mostly on the back of wealthy Russian visitors who opted for Turkey, due to flight restrictions applied by Western countries after Russia’s invasion of Ukraine. The numbers of German and British visitors also rose strongly creating a strong rise in Turkish tourism industry. The meetings and events industry has also seen a sharp rise and it is expected to see more boosts.

The Germans made up the largest chunk of foreign visitors in January-July with nearly 3 million arrivals, soaring 137.36 percent compared to the same period last year, according to figures released by the Culture and Tourism Ministry on Monday. They were followed by Russians with 2.1 million and the Brits with 1.8 million.

By including Turkish nationals living abroad who also visited the country during the period, the figure touches 26.1 million visitors, according to ministry figures.

The country’s tourism revenues surged 190 percent from a year earlier to $8.72 billion in April-June, said data from the Turkish Statistical Institute (TurkStat). The tourism revenues are vital to Turkey’s economy as Erdogan’s economic plan focuses on expanding the current account surplus in order to tackle high inflation and interest rates. The revenue from travel and tourism industry has also seen a rapid growth. The tourism ministry in Turkey raised its year-end targets last month to 47 million tourists and $37 billion in tourism revenues.

Bulent Bulbuloglu, Vice Chairman of Turkish Hoteliers Federation (TUROFED) said that the July figures were strong and so is August. When the Turkish Tourism Authority look at the current bookings, number of flights and seats allocated by tour operators for September, October and November, it seems that ministry’s targets will be achieved. Along with high demand from Britons and Germans, Bulbuloglu pointed out wealthy Russians newly coming to Turkish market. Wealthy Russians who used to travel to more expensive destinations such as Spain, France, Italy and Greece have also turned their faces to Turkey due to flight restrictions by Western countries.

Turkish Lira is the local currency and lira  is traded at historical lows, has lost 27% of its value this year, after it lost more than 40% of its value last year. Turkey has a big price advantage when compared with its European rivals. And no doubt, recent weakness in lira makes the country more attractive” said TUROFED’s Bulbuloglu.

The data points are more subdued trend among domestic tourists amid soaring inflation that runs at a 24-year high of nearly 79%. According to the official data showed that domestic tourist trips with overnight stays rose just 6.1% to 8.8 million in the first quarter, with inflation doubling trip costs. Last year the number of such trips jumped 23.2%. In the Mediterranean resort area of Marmaris, hotel manager Fahri Tan said rising costs hurt both guests and operators, whose costs surged 150%-200%.

Tan, manager of the Fi Light Solto Boutique Beach Hotel in Selimiye, near Marmaris said that the domestic tourists have become unable to bear the total holiday expenditure burden due to the sharp increases in transportation and other expenditures.