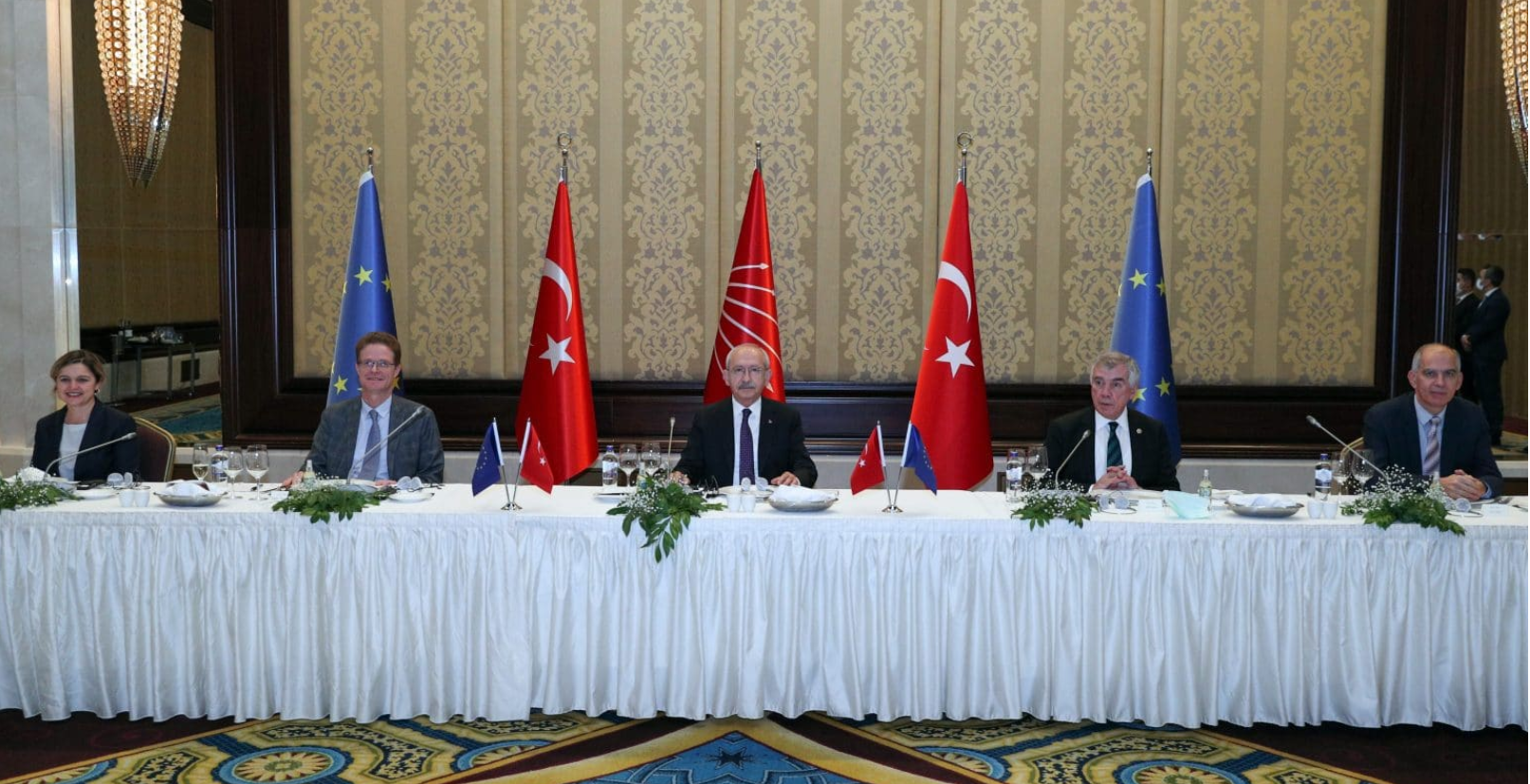 “Can I ask you a question,” the main opposition Republican People’s Party (CHP) Kemal Kılıçdaroğlu asked the Ambassadors of European Union (EU) countries in Ankara. Without making an opening speech, he received questions from the ambassadors and answered their questions at the exclusive dinner meeting on January 19. When he received a positive response to his wish, he asked:

“You have also been with a dinner with Erdoğan, what did you ask him, what were his answers?” referring to the dinner given by President Tayyip Erdoğan to EU Ambassadors on January 13.

Some participants giggled, some laughed. They said they could not ask Erdoğan any questions.

“We could ask a question or two in previous years,” one participant said, according to my sources at the dinner, “this time, he just gave us a speech,” that participant added.

Kılıçdaroğlu then closed the meeting by saying to the EU ambassadors, “We will listen to your criticisms and answer your questions when we come to power.”

The most noteworthy “if” in this sentence that Kılıçdaroğlu said to the EU Ambassadors is “When the opposition bloc is in power”. That’s what people are curious about. How would the opposition come to power? How will they persuade the public? Is there a harmony between the six opposition parties working on a constitutional draft for transitioning to a parliamentary system? Slogans like “Everything will be fine” excite the opponents, but the question “How?” is the elephant in the room.

Two critical issues: how to manage the economy?

In other words, the answer “Everything will be fine” or “We will set up a commission and see” are not enough to the EU ambassadors, not only to them but also to domestic and foreign investors. They are aware that in the recent surveys, for example in MetroPoll survey, the answer to the question “Who manages the economy better?” those who answered the question “the opposition” was only 1.3 percent more than those who answered “power”, and 17.6 percent remained hesitant despite the poor state of the economy.

Recently, political scientist Seda Demiralp indicated in her article on YetkinReport that “economic crisis solely does not make the government lose elections”; “The opposition needs to convince the voters that they can do better”.

When Kılıçdaroğlu told the EU Ambassadors that the constitutional amendment draft for the transition to the parliamentary system of the 6 opposition parties was at the final stage, the questions were whether there was an economic program.

Kılıçdaroğlu’s answer was interesting. He told the EU Ambassadors that Ali Babacan’s DEVA Party had initiated a project, and they would soon start working on this draft. But, just to remind, it was the Future Party leader Ahmet Davutoğlu who first came up with the idea of a joint draft Constitution.

The other is the revival of the rule of law

Another noteworthy aspect of the matter is that just before the meeting, CHP’s Faik Öztrak, who returned from Denizli, informed Kılıçdaroğlu that the business circles there were also curious about the “economic policy of the opposition”. In other words, the opposition has realized that it cannot attract the voters with the rhetoric “AKP has failed the economy”.

The ambassadors also asked Kılıçdaroğlu what steps the CHP and the opposition bloc, in general, intend to take in terms of pluralist democracy, the rule of law and the elimination of polarization in Turkey. Kılıçdaoğlu also said that these are the main issues and that they have already given priority to the amendment of the current Constitution, which dragged the country into one-man rule. When asked about the Kurdish question, he repeated that he saw the solution in the Turkish Grand National Assembly.

In the dinner, ambassadors also asked Kılıçdaroğlu about Turkey’s promises about the Anti-Terror Law, which was one of the conditions stipulated in EU-Turkey immigration agreement in 2016. Kılıçdaroğlu replied to the EU ambassadors that they would fulfill this promise made on behalf of Turkey in their rule, and that this would prevent journalists and thinkers from being imprisoned as terrorists.

Foreign policy was the last topic. The questions were mainly about Turkey’s stance if the Russia-Ukraine crisis escalated if they would be the ones who made the policies.

The CHP leader told the EU ambassadors that Turkey is a NATO member, that they will be in harmony with NATO decisions when they come to power, and that they favour following a cautious and balanced policy with Russia. However, like Erdogan, he said they would not “accept” the annexation of Crimea by Russia.

As for Syria, Kılıçdaroğlu was asked how they would “gradually” send back the Syrian refugees within two years if they came to power because this is an issue requiring dialogue with Damascus. CHP needs to be more convincing.