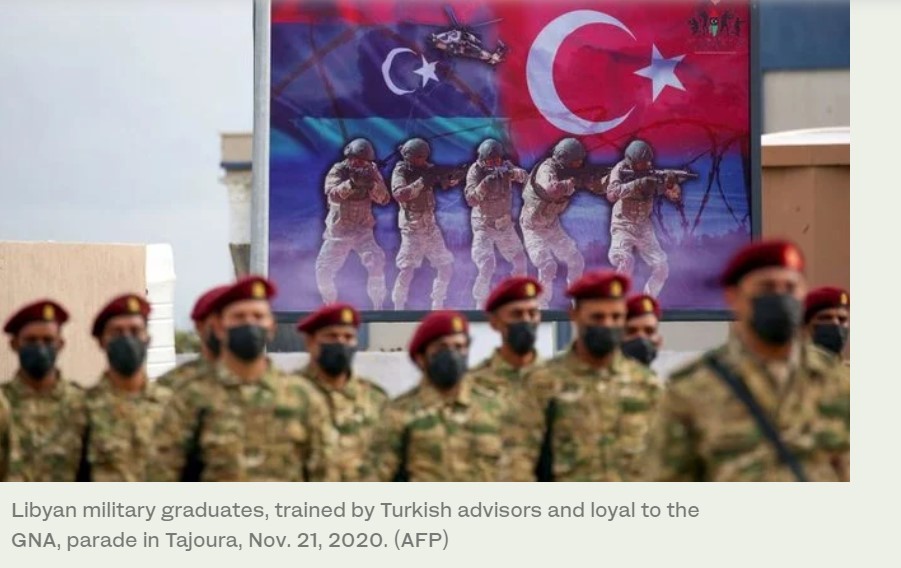 Turkey last week sent a high-level delegation — made up of the foreign minister, chief of the general staff and head of intelligence — to Libya. The delegation was received by top Libyan officials, including Presidential Council head Mohammad Al-Manfi, interim Prime Minister Abdul Hamid Dbeibah, Presidential Council members Abdullah Hussein Al-Lafi and Musa Al-Koni, and Foreign Minister Najla Mangoush. The visit was mainly aimed at consolidating what Turkey has so far been able to achieve in Libya.

During her meeting with her Turkish counterpart Mevlut Cavusoglu, Mangoush raised the question of the withdrawal of foreign troops from Libya.

While attention is focused on Turkey’s military presence, there are also Russian Wagner mercenaries present. They are employed by a person close to Russian President Vladimir Putin, but Moscow denies that they have anything to do with the Russian state. There are also Sudanese and Chadian mercenaries in the country.

Cavusoglu responded by saying that Turkey stood by Libya during its difficult times, that this support would continue in line with the memorandum of understanding signed in 2019 and that Turkey’s military presence should not be equated with that of foreign mercenaries who fight for money.

There are two aspects to the Turkey-related military presence in Libya: The Turkish military advisers and the Syrian mercenaries. Turkey considers the military advisers to be a separate category because they went to Libya at the request of the Government of National Accord (GNA). The weakness in this reasoning is that the Libyan government’s agreement has yet to be approved by the Tobruk-based parliament and Mangoush is close to this chamber, which is opposed to the GNA.

Meanwhile, Turkey has not admitted that it sponsors the Syrian mercenaries in Libya. International media outlets have claimed there were about 17,000 of these fighters in the country, but that 2,500 have been withdrawn. If these figures are accurate, we may presume there are still about 14,500 Turkey-sponsored Syrian mercenaries left in Libya.

Turkey’s reluctance to agree to a troop withdrawal stems from the threat the Wagner forces pose to the GNA. One has to remember that eastern warlord Khalifa Haftar launched an attack to seize the capital, Tripoli, in April 2019. It was thanks to Turkey’s military assistance that the attack was contained and the GNA was saved from possible collapse. Since then, a more or less stable power balance has prevailed between the GNA and Haftar’s forces, but there is no guarantee the latter would refrain from resuming their advance toward Tripoli if Turkey’s military presence were withdrawn from the country. If this happens, we may be back to square one in the Libyan civil war.

It is difficult to tell what type of political atmosphere will emerge after Libyan parliamentary elections in December. Turkey wants to maintain its military presence in Libya at least until the situation stabilizes and a well-trained, professional army is created by the government formed after the elections.

Turkey will not be at ease if Libya remains divided and the eastern provinces fall under the influence of a combination of Wagner and Haftar forces. The most important factor in Ankara’s attitude is the memorandum of understanding signed with the GNA in November 2019 to demarcate the maritime jurisdiction areas between the two countries. This agreement creates a corridor between the Turkish and Libyan jurisdictions and cuts off the eastern Mediterranean from the remainder of the sea. If countries such as Greece, Cyprus, Israel and Egypt want to lay a gas pipeline on the seabed to carry eastern Mediterranean gas to Europe, it would have to cross this Turkish-Libyan corridor, which Turkey would probably militarily defend. If Libya is divided into eastern and western zones of influence, the maritime corridor would fall into the hands of the eastern zone, which would make the Turkey-Libya memorandum of understanding a dead letter. Therefore, unity and the territorial integrity of Libya have implications for Turkey beyond the withdrawal of its military presence.

Furthermore, Turkey suffered financial losses amounting to several billion dollars when Libya fell into chaos in 2011 and it now wants to recuperate as much of this as possible. If Haftar’s forces gain the upper hand, Turkey will have to suffer this financial loss.

In these circumstances, how long Ankara will remain reluctant to withdraw is difficult to judge.

Yasar Yakis is a former foreign minister of Turkey and founding member of the ruling AK Party. Twitter: @yakis_yasar