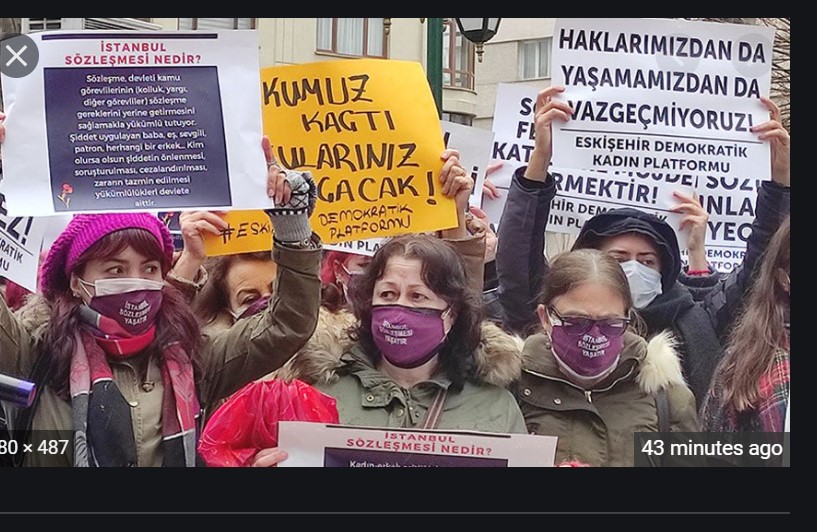 According to Turkish press, President Erdogan’s decree withdrawing Turkey from a treaty to protect women against violence is being protested in Istanbul,  Çorum, Balıkesir, Diyarbakır, Konya, Denizli, Ankara and Şanlıurfa. According to daily Cumhuriyet police has stopped women’s groups from marching to the central Kizilay square, Ankara,  with several detentions.  We have several videos of the events across Turkey, where crowds range form dozens to thousands. PATurkey is monitoring the protests to see whether there is buy-in from other groups, such as Kurds, the opposition or university students.  Turkey is roiled by economic stagnation and rolling waves of Covid-19, with new cases exceeding 20K on Friday.

Turkey’s main opposition called the move an effort to relegate “women to second class citizens,” and vowed to return the country back to the convention, saying the current government failed to secure the rights of women and children. “You are failing to protect the right to life,” said Gokce Gokcen, an opposition parliamentarian on Twitter.

A coalition of women’s groups said the presidential decree withdrawing from the convention felt like a “nightmare” and by pulling out of the convention the government has announced that it will no longer protect women from violence.

“It is obvious this withdrawal will empower murderers, abusers and rapists of women,” the coalition statement said.

Turkey does not have femicide numbers issued separately but a non-governmental women’s right group puts the number of women killed in 2021 at 77, reports CNN.

Turkey has withdrawn from the Istanbul Convention on women’s rights, world’s first binding treaty to prevent and combat violence against women, according to a presidential decree published Saturday in the official gazette, Trend reports citing Daily Sabah .

Officially called the Council of Europe Convention on Preventing and Combating Violence Against Women and Domestic Violence, the accord was established in 2011 and aims to create a legal framework to prevent and fight against violence against women and domestic violence, as well as promoting equality.

WATCH:   What do Turks think? Listening to opinion polls

Ankara, which signed the accord in the same year and became the first country to ratify the convention, offered no reason for the withdrawal.

Opponents of the pact in Turkey say the convention undermines family unity, encourages divorce, and that its references to equality were being used by the LGBT community to gain broader acceptance in society.

Shortly after the announcement of the withdrawal, Vice President Fuat Oktay said in a post in Twitter that the government aims to further its sincere struggle to bring Turkish women’s reputation and dignity to its deserved level by protecting traditional social structure. “There is no need to look for outside remedy or imitate others for this paramount goal. The solution is indeed lies in our traditions and customs, in our own,” Oktay wrote.

Family, Labor and Social Services Minister Zehra Zümrüt Selçuk said Turkey’s constitution and domestic regulations instead would be the “guarantee of the women’s rights.’