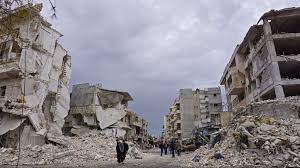 As Turkey and Russia uphold a fragile  cease-fire agreement in Idlib, Turkey remains  determined to maintain its military presence in Syria.   Turkey, Russia and Iran announced a new summit to resolve the conflict in Syria, but expectations are very low that the three main actors on the scene can agree on a solution that would meet their opposing objectives.  In the meantime, US announces new sanctions on Syria, which should help Turkey to prevent new assaults by Damascus on its occupied zones in Syria, as well as raising the prospect of better bi-lateral relations.

“The 17th joint land patrol was conducted in Idlib province on Tuesday to maintain the Turkish-Russian ceasefire agreement in Syria. A patrol vehicle was lightly damaged due to detonation of an unidentified explosive and taken to a safe location,” the ministry tweeted.

“No personnel was harmed in the incident,” said the ministry, noting that the joint patrols will continue with determination within the scope of the agreement.

Ankara, Moscow and Tehran have agreed to hold a joint videoconference, followed by a face-to-face meeting to discuss a settlement on Syria, Russian Foreign Minister Sergey Lavrov announced on Tuesday.

The presidents of the three countries will discuss Syrian issues in a videoconference to be followed by a summit in Tehran, Lavrov said at a news conference following a meeting with his Iranian counterpart Mohammad Javad Zarif.

“Today, we can confirm the agreement of three presidents of the Astana format countries on a summit to be held in Tehran with measures to be agreed in line with the situation regarding the coronavirus. We have supported the proposal to hold a video conference before a face-to-face meeting between the three leaders. We will agree on the terms of this videoconference quite quickly, and will announce them soon,” the minister said.

According to Reuters, The United States will impose sanctions on Wednesday aimed at cutting off revenue for Syrian President Bashar al Assad’s government in a bid to push it back into United Nations-led negotiations and broker an end to the country’s nearly decade-long war.

U.S. Ambassador to the U.N. Kelly Craft told the Security Council on Tuesday that Washington would implement the measures to “prevent the Assad regime from securing a military victory.”

“Our aim is to deprive the Assad regime of the revenue and the support it has used to commit the large-scale atrocities and human rights violations that prevent a political resolution and severely diminish the prospects for peace,” Craft said.

Craft said the sanctions would be imposed under the Caesar Syria Civilian Protection Act – signed by President Donald Trump in December – which aims to deter “bad actors who continue to aid and finance the Assad regime’s atrocities against the Syrian people while simply enriching themselves.” [nL8N2DS58K]

Addressing a separate meeting of the Geneva-based U.N. Human Rights Council on Tuesday, Syria’s U.N. Ambassador Bashar Ja’afari, accused Washington of trying to impose U.S. law on the world and flouting calls for it to end unilateral sanctions.