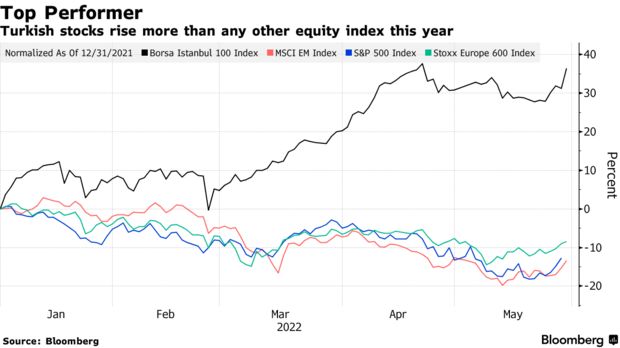 Turkish stocks have outpaced every equity market in the world this year in local currency terms as domestic investors clamor for assets that can shield against soaring inflation.

A jump in the inflation rate to almost 70%, coupled with a government-led pause to interest-rate hikes, has left Turks with limited choices for where to park their savings. The trend has powered stellar gains for companies such as Turkish Airlines, up 145% since the start of January, or steelmaker Eregli Demir ve Celik Fabrikalari TAS, which has gained almost 40%.

“There’s not much option for where Turkish money can go,” said Burak Cetinceker, a money manager at Istanbul-based Strateji Portfoy, in a phone interview. “It’s impossible for savers to ignore Turkish equities if they want to protect their savings from inflation.”

Gains for Turkish equities are in contrast to the losses seen in global stock markets on concerns over recession risks as surging inflation spurs central banks to ramp up rate hikes. The scale of the advance is such that the country’s BIST 30 index is still up more than 12% in dollar terms, among the top 15 performers worldwide, even after the lira plunged 19% since the start of the year.

But while local Turkish investors keep piling into stocks, foreigners spooked by the country’s unorthodox monetary policy stance are retreating. So far this year, they’ve sold a net $2.2 billion of equities, dragging foreign ownership of Turkish stocks to a record low near 35% in the process.

On Friday, Turkish President Recep Tayyip Erdogan again scorned the notion that higher borrowing costs could help rein in price increases as he branded those who see a link between the benchmark rate and inflation as “either illiterates or traitors.”

For now, the domestic thirst for equities has helped weaken the correlation between Turkish stocks and global markets, according to Emre Sezan, head of research at Is Investment. He thinks the rally could now slow as the government weighs new instruments to protect investments from inflation.

Other money managers such as Strateji Portfoy’s Cetinceker and Marmara Capital’s Haydar Acun say the rally may have further to run because Turkish stocks still trade with appealing price-to-earnings valuations.

The Borsa Istanbul 100 Index trades at 4.5 times estimated earnings over next year, suggesting a near-record discount of more than 60% to the MSCI Emerging Markets Index. 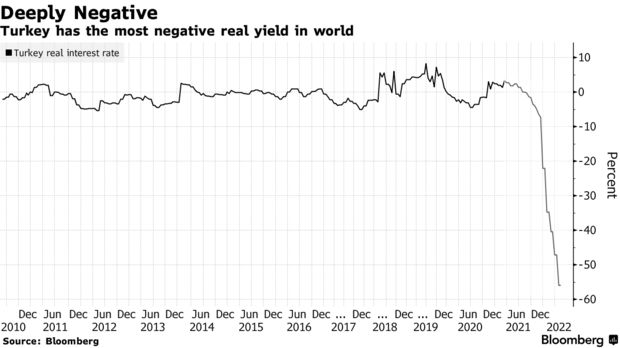