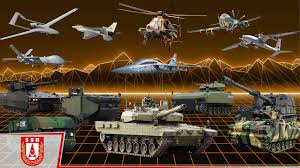 Turkey’s home-made armed and surveillance drones have made the difference in the Libyan War for the Tripoli-based GNA in pushing back Gen Haftar’s military gains. These are also used with great effect in Turkey’s annual PKK clean-up campaigns, securing the Turkish Military a new advantage, which PKK has trouble matching, or defending against. Turkey’s NAVY, too, has undergone a major rehabilitation, with new frigates and even a small aircraft carrier being finished to join the service. There is fly in the ointment, though, reports Burak E.  Bekdil. Turkey still can’t manufacture a domestic multi-purpose engine.

STM Defense Technologies Engineering, which offers Kamikaze drones for use by security forces, continues its efforts for more advanced products and exports at the Ostim Technopark facilities in Turkey’s capital Ankara.

A team of engineers at the compound works mainly on tactical and autonomous systems, mainly for the Togan, Alpagu and Kargu models.

The Ostim facility houses the main center for these models — the company’s “autonomous” product line — as well as the infrastructure for their mass manufacturing.

There has been great international interest in the Kargu after its use by the Turkish Armed Forces.

It has proven its success in tropical, desert and tundra climate conditions, with talks now underway with three countries for the export of the kamikaze drone.

The STM is preparing to achieve its first export success story in autonomous systems by soon completing export negotiations.

STM has been part of Turkey’s defense industry in the fields of engineering, technology and consultancy for more than a quarter-century.

The firm works on naval and air platforms, cyber-security, big data, autonomous systems and artificial intelligence to satisfy the needs of Turkey and friendly nations.

For the lack of an engine…

Turkey’s inability to produce a fully indigenous engine is harming some of the country’s otherwise successful domestic defense programs, according to industry and government officials.

A government procurement official agreed, telling Defense News that “at best the problem causes major delays, and at worst it can be an existential threat [to programs].”

The Altay, a multibillion-dollar program for the production of Turkey’s first indigenous tank, has long been delayed due to difficulties surrounding the engine and transmission used to power the new-generation tank.

BMC, a Turkish-Qatari joint venture that in 2018 won the serial production contract for the Altay, said in October 2020 that the tank would be fielded within 24 months. The original target was to have the Altay in the field this year 2020. Today, procurement officials and industry sources say even 2022 is an optimistic deadline.

Turkey also needs an engine for the new-generation TF-X fighter jet as well as indigenous helicopter models in the making.

At the center of these engine efforts is Tusas Engine Industries, a state-controlled engine maker.

TEI announced June 19 that it successfully tested its locally made TJ300 miniature turbojet engine, which the company produced for medium-range anti-ship missiles. The engine features a thrust rating of 1.3 kilonewtons.

“The effort is about ending dependency on imported designs,” a TEI official said.

Separately, Turkey’s Kale Group is developing a larger, albeit miniature turbojet engine called the KTJ-3200. It has a 3.2-kilonewton thrust rating, and will power the Atmaca and SOM missile systems. On a much bigger scale, Kale Group has ambitions to develop an engine to power the TF-X.

In 2017, Kale Group and British company Rolls-Royce launched a joint venture to develop aircraft engines for Turkey, initially targeting the TF-X. But the £100 million (U.S. $124 million) deal was effectively put on hold due to uncertainties over technology transfer. In December, Turkish Foreign Minister Mevlüt Çavusoğlu said the government is keen to revive talks with Rolls-Royce.

When asked for an update on negotiations, a Rolls-Royce spokesperson told Defense News: “We submitted an engine co-development proposal to Turkey, but the customer has not elected to pursue this to date.”

Turkey originally planned to fly the TF-X in 2023, but aerospace officials are now eyeing 2025 at the earliest.

TEI is also developing the TS1400, a turboshaft engine it intends to power the T625 Gökbey, a utility and transport helicopter developed and built by TAI. The Gökbey currently flies with the CTS-800A turboshaft engine supplied by Light Helicopter Turbine Engine Company, a joint venture between American firm Honeywell and Rolls-Royce.

The Gökbey made its maiden flight in September. TEI says it successfully tested the “core” of its TS1400 turboshaft engine and plans to deliver the prototype to TAI in late 2020.

But analysts remain cautious. “These efforts may eventually fail to materialize without meaningful foreign know-how,” said a London-based Turkey specialist. “Or they may come at costs not viable for mass production.”

Andrew Chuter in London contributed to this report.