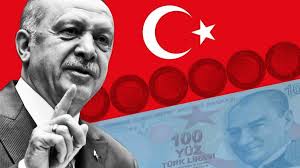 Turkey’s lira tumbled past 14 to the dollar to 14.75 for the first time in the early hours with expectations of another rate cut this week and Treasury’s and Finance Minister Nebati’s comments that they would not hike rates.

The central bank intervened the currency market for the fourth time selling approximately USD1.0 bn.    The lira weakened as much as 6% earlier before paring losses after the monetary authority sold foreign exchange in the currency market. The bank — which is forecast to cut interest rates this week despite rising inflation — cited “unhealthy” price formations in the market.

Following the intervention TL/USD traded at 14.30.

As the markets are eying an announcement from today’s summit held by Erdogan with central bank governor Kavcioglu and Treasury/Finance Minister Nebati, TL/USD improved to 13.75 levels.

Speculations call for a possible no rate cut decision from this week’s central bank meeting.