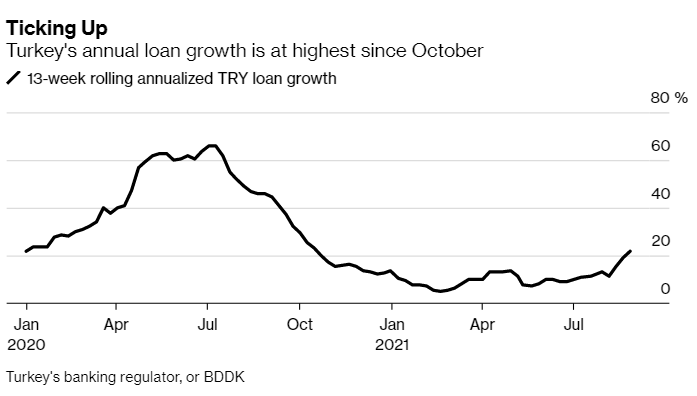 Turkish lenders are resisting demands from the banking regulator to curb growth in consumer credit, which authorities blame for fueling inflation and the current-account deficit.

The executives of top Turkish banks faced off against Mehmet Ali Akben, head of the banking regulator, last Thursday, according to the minutes of their meeting, a copy of which was seen by Bloomberg. The major difference that emerged in the debate centered around a recent uptick in borrowing by consumers.

Akben attributed the demand for retail loans to their low cost relative to corporate credit and said the interest-rate gap between them has become too narrow. Banks countered by saying that growth in consumer loans is still below inflation and the risks they present are at “reasonable” levels.

The meeting was held as part of regular discussions with lenders, and included Alpaslan Cakar, head of the Banks Association of Turkey and chief executive officer of the country’s largest state-run lender, Ziraat Bankasi AS. The regulator and the banking association declined to comment.

How the debate plays out could resonate well beyond the banking industry and help shape Turkey’s policy agenda for the rest of the year. Inflation is already running close to 20%, with Turkey’s year-end forecast for price growth raised in the government’s economic program published on Sunday.

Another jolt of credit-fueled expansion would risk driving up imports and feeding the economic imbalances that have time and again unsettled the lira and turned off investors.

The clash with lenders may also hint at differences in opinion among decision makers in Turkey, especially as the central bank fields calls from President Recep Tayyip Erdogan to deliver a rate cut as early as this month. Treasury and Finance Minister Lutfi Elvan has meanwhile said that the government is looking at ways to curb an increase in retail loans.

While credit growth is nowhere near the boom levels seen during the pandemic last year, it’s shown signs of a pickup during a pause that followed a monetary easing cycle and a decision in November to remove a rule that pressured banks to extend credit.

Lira-denominated loans to consumers have grown 10% since the beginning of this year, thanks largely to a 23% surge in credit card debt. Commercial loans are up 6.3%, according to data from the banking watchdog.

The contrast in approaches follows a period over the past two years when the government leaned hard on banks, especially those owned by the state, to accelerate lending to support the economy after the onset of the coronavirus pandemic.

But faced with a rising toll of cheap loans on their balance sheets, state banks have started to slow down the pace of credit growth.

The central bank’s reluctance to raise interest rates has meanwhile helped to keep up demand for debt from consumers in an economy that grew at a record annual clip of 21.7% in the second quarter.

A surprise acceleration in inflation in August to 19.25% from a year earlier pushed Turkey’s benchmark rate adjusted for price growth into negative territory for the first time since October. Weighted average rates for consumer and commercial loans are at 22% and 20.7% respectively, according to data compiled by Bloomberg.

The regulator told banks that while forbearance measures introduced during the pandemic won’t be extended beyond September, their removal will have a limited impact on bad loans, according to the minutes.

Possible measures being considered in response include an increase in fees and commissions as well as limits on retail loan amounts, Akben was cited as saying in the minutes, which were compiled by the banking association and circulated among its members. Another option is for the central bank to impose additional reserve requirements for extending retail loans above a certain level.

Bankers indicated that they saw no need for such steps.