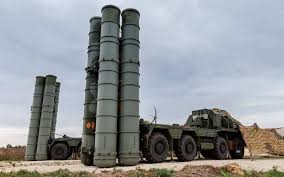 Ankara has officially announced that it is “postponing” the “activation” of Russian made S-400 anti-missile batteries, but “its plans for eventual deployment“  have not changed.   While the delay in activation is blamed on the raging epidemic in Russia and a lesser one in Turkey, experts suspect the administration didn’t want to deal with CAATSA Sanctions to be imposed by US congress at a time when the local currency is under lethal stress.  However, could there be other reasons?  It is worth asking this question, because the relationship between Turkey and Russia is not evolving into a true strategic relationship as President Erdogan had once hoped. Kremlin has so far refused to reduce the above-market price it charges to Turkey for natural gas, while in Libya, the “strategic partners” support opposing sides. In as much as there is fragile cease-fire in the divided Syrian Province of Idlib, Putin has failed or not tried to persuade Damascus to recognize Turkey’s   legitimate interests in keeping refugees at home.

Due to the coronavirus pandemic, Ankara has apparently postponed the activation of the S-400 air-defense missile system it had purchased from Russia that had been planned for April 2020 (Hurriyet Daily News, April 29). Regardless of the COVID-19 justification, Turkey’s decision was, in fact, motivated by a number of entirely unrelated factors, and the country now stands at a crossroads between several political-military scenarios.

Following its “postponement,” Turkey faces at least four potential future scenarios depending on its next steps:

In the “great expectations scenario,” Turkey could further delay declaring the S-400 operational in the hope it may be saved by President Donald Trump. Yet, even if the US chief executive secures a second term, his influence over the Congress could be limited next year, depending on the outcome of a number of key legislative races this fall (Euronews, May 1, 2020).

In the “transatlantic re-alignment scenario,” Turkey would mothball the S-400 in return for resuming its participation in the F-35 fifth-generation stealth fighter program.

In the “sanctions scenario,” Ankara might officially announce the establishment of its first S-400 regiment after weathering the coronavirus. CAATSA sanctions would inevitably follow, but the impact of this course would be determined by the scope of the financial penalties. Nevertheless, having seemingly undermined NATO cohesion and even made money for doing so, Russia would be the clear winner under such an outcome.

Finally, one may speculate about a “wildcard scenario.” In the 2008 Five-Day War, Georgian air defenses scored unexpected kills against Russian aircraft, including a Tu-22M bomber. Apparently, Tbilisi’s earlier cooperation with Kyiv helped Georgia’s Armed Forces to master the Soviet-era SAM systems under their command (The Military Review, November–December, 2009). Today, Turkey and Ukraine also enjoy burgeoning military ties. The Soviet-legacy Ukrainian defense technological and industrial base could, thus, be a lucrative source for the Turkish military and arms manufacturers to better understand the design philosophy behind the S-400 that Ankara has just procured. Indeed, Ankara may want to lean on the Soviet-Russian technological legacy for its own future strategic defensive weapons development. After all, Turkey’s present offensive strategic weapons program is based on the B-611 tactical ballistic missile system, procured from China decades ago (Vatan, January 8, 2020). Of course, this low-probability/high-impact scenario will heavily depend on the Turkish government’s ability to keep such an effort hidden from the Kremlin.