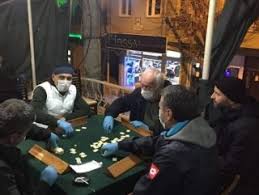 The timing of the preventive measures is crucial in the crisis response. Although Turkey was relatively slow in stopping flights from Iran, (the second epicenter of the pandemic) it was among the first European countries to stop flights to and from China on February 3. Turkey also introduced social distancing measures around mid-March, right after the first confirmed case of Coronavirus, and earlier than many Western countries. Large events and gatherings were suspended; schools were closed nationwide; nonessential shops, venues and public services halted their activities. Borders were closed except for returning residents and citizens. Eventually, travel to and from the country’s 31 big cities was also banned. Production was never halted. And the lockdown targeted only certain age groups.

The most careless decision on the part of the government concerned the policies about the umra. The Directorate of Religious Affairs inexplicably did not cancel umra travel and allowed 21000 citizens to travel to Mecca. After the nature of the pandemic was widely known it took no serious measures to quarantine the returning pilgrims and only after a public outcry did it make an effort to implement a quarantine to the last group of some 5000 pilgrims. If infected, these people were likely to have contaminated many in their surroundings since custom dictates that they receive visitors, well-wishers and others at home to accept congratulations for having done the pilgrimage.

On lockdown, the government initially banned all forms of non-essential movement of people over 65 and people with comorbidities. Later, this specific ban was extended to include people under 20, unless they were employed. These measures did not succeed in containing the spread of the virus and generated an intense debate around the priorities of the Turkish government. In the middle of an ever-deepening economic crisis, the AKP government unsurprisingly opted to protect the economy and kept the workforce mostly at work. In fact, the strategy of Turkey was labeled “class-immunity” in mocking reference to the concept of UK’s “herd-immunity”. This strategy, however, created a rapidly increasing infection rate as in elsewhere.

However, what is unique in Turkey was that this rapid spread of the infection did not overburden the healthcare system and cause its collapse as happened in many other countries. Taking the risk groups and elderly out of public life completely might have been one of the reasons for this difference. For over a month now, Turkey’s elderly population and all people with comorbidities could not step out of their tiny city apartments even for a short walk.

This policy would have been totally impossible in a different social setting where the family networks around the elderly population are not as dense as they are in Turkey.  As Mine Eder rightly points out, with very limited welfare state provisions, domestic care for children and the elderly in Turkey has, from the very start, always been sourced through either extended family networks or the informal labor market.

Indeed, taking care of the elderly in Turkey is mostly a family matter and unequally shared by the women of the family: the daughter or the daughter-in-law is responsible for taking care of the parents. When the family is wealthy enough and young women of the family are working, the immigrant woman labor steps in. Many of the middle-class families in Istanbul hire immigrant women mostly from the post-Soviet countries as stay-home caregivers for their parents. This type of labor is cheap and convenient given that they do stay in the same house where they work, transforming the caregiving into a 24-hour job under conditions resembling slave-labor for some and without much intervention coming from the state to regulate working conditions either.

Most importantly, sending one’s parent to a nursing home is culturally taboo in Turkey and only under extreme circumstances should families send their parents to nursing homes. Conversely, it is the most common form of caregiving in Europe and the US. Therefore, data from varying official sources indicate that in Italy, Spain, France and Belgium between 42% and 57% of the COVID-19 deaths took place in nursing homes. Nursing homes are places where physical distancing is almost impossible among a susceptible population. Moreover, the staff live outside, and are not well-trained enough to handle emergencies. Transferring the care of the elderly to a collective like nursing homes is under normal circumstances a sign of a well-functioning welfare state. It enforces and supports women’s participation in the market by reducing their caregiving responsibilities. However, under conditions of a rapidly spreading virus that victimizes the elderly disproportionately, this form of collective care seems to be one of the major factors in hampering the capacity of some Western European states in limiting fatality numbers and reducing the pressures over health services.

More broadly, demographics matters. For aging populations collective caregiving becomes the only viable option. Turkey has a median age of just over 30, younger than anywhere else in Europe. In Europe, consistently low birth rates and higher life expectancy have transformed the shape of the EU’s age pyramid; marking a transition towards a much older population structure, a development which is already apparent in Italy and France. The median age of the EU-28’s population is rising and was 43.1 in 2018. With an ageing population, neither herd immunity nor class immunity are viable strategies. And as the virus reached the vulnerable populations, it claimed proportionately more lives.

What About the Health System?

Another factor that might be related to the low fatality rates is the strength of the health industry and the resources and capacity available to it. Many analysts identified the AKP government reform of Turkey’s health care system, one that also presented new ways for the inclusion of the marginalized segments of the population, as a major cause of its initial political success. Indeed, according to World Bank data, between 2002 and 2008, there was a significant increase in health expenditures. However, this trend was reversed and health expenditures began to decline sharply starting in 2009, in the wake of the “great recession”. It reached the point whereby among OECD countries, Turkey ranked at the very bottom in terms of total expenditures on health per capita. The number of hospital beds per 100,000 people is also another important indicator of the health care system of a country. Turkey currently has 2.81 beds for 1 000 people ranking far behind Germany (8) or France (5,98).

Why would a country with a relatively young population have this many intensive care beds? The answer lies in the privatization of the health sector.

However, in a sudden crisis like this pandemic, it wasn’t the regular hospital beds that mattered but the number of intensive care unit (ICU) beds. Turkey, interestingly, ranked as one of the top countries in Europe in the number of ICU beds per capita. Why would a country with a relatively young population have this many intensive care beds? The answer lies in the privatization of the health sector. Almost 60 percent of the intensive care beds are in private hospitals.

Intensive care services are the most expensive medical service, the costs of which services are covered by the state insurance system if the patient cannot afford their treatment. Previously, there were a multitude of reports on how private hospitals were abusing the system by unnecessarily and extensively putting the patients in ICUs and charging the public for that. But what could be seen as an investment strategy feeding corruption ironically helped Turkey in delivering effective care to COVID-19 patients.

One should also look at city-level inequalities in the healthcare system. The national figures may be misleading since the pandemic does not affect the country evenly and metropolitan cities are its epicenters. In the case of Turkey, both the health services and health expenditures are concentrated in Istanbul. This is a feature of the Turkish healthcare system that was sharply criticized for being a symbol of unequal access to health care. This fact, and again unintentionally, became one of the strengths of Turkey’s response to the pandemic. Just like NYC, Istanbul has a disproportionate share of the infections since it is Turkey’s most important international hub. Indeed, as compared to other Western countries, Turkey has fewer globally connected cities.

Finally, physicians who were used to routinely working under stress for long hours, did not seem to have been overwhelmed by the new wave of patients sent their way by the epidemic. There were many who were infected and a number of well-respected doctors lost their lives. Yet a good, devoted and highly educated medical workforce, slowly increasing in numbers, worked in favor of Turkey and positively affected fatality rates. Finally, as a member of Turkey’s Scientific Council, Dr. Alpay Azad recently said in an interview that medical practitioners in Turkey started using aggressive treatments and medication much earlier than their Western counterparts, suggesting the flexibility of treatment protocols in Turkey as compared to the Western countries. This also raised criticism towards the government for suppressing certain side effects of specific medicines.

The immediate questions about the pandemic in Turkey were well taken: how could a country that was identified as an example of declining state capacity, deinstitutionalization, and low levels of trust, have lower fatality rates than the “exemplary” countries? How could a country in which the central government keeps fighting with the local municipalities in order to hamper their capacity to deliver services to their vulnerable populations (so as not to let them get political credit) be successful in limiting the number of fatalities?

The (low fatality)  figures are indeed counterintuitive. Yet the criticisms over Turkey’s fatality rates reflected an implicit bias. The immediate answer was found in the lack of transparency and analysts rushed to argue that the figures could not be true because they were counterintuitive. The numbers were accused of being incorrectly reported. As such, these figures have become a new battle ground. Under these circumstances, reporters and analysts failed to look into the factors that may have explained the discrepancies in numbers. This could have allowed them to give a different perspective on the comparative results between Turkey and Western European countries.

We argued that what was seen as a simple problem of transparency, may hide a more complex explanation. The crisis management system of Turkey benefited a lot from many of the negative externalities that would be seen as a disadvantage in normal circumstances. The Turkish case shows us that success in each separate case is related to multiple factors that interact with the unique social features of a given country. Demographics interacted with politics. Social structures affected the outcome in uncertain ways. Timing, population density all mattered tremendously.

The most important lesson we should draw from this crisis, however, is that in such emergencies, we need governments and elites that we should be able to trust. We need inclusive and broad health care not just to deal with this crisis but under normal circumstances as well. We need to take care of our vulnerable populations better so that they will be better equipped to survive in times of crisis. We need dense global cooperation to prevent the rapid spread of diseases. We need early detection and monitoring systems. Physicians should report new types of viruses not to their governments, but to the international bodies without fear of prosecution.

We cannot know how and which groups the next pandemic will hit. We cannot predict what the next crisis will be. A crisis should not be our guide to the future. Improving the inclusiveness of our societies in normal times should.

This is an excerpt from the article The Battle Over the Numbers: Turkey’s Low Case Fatality Rate