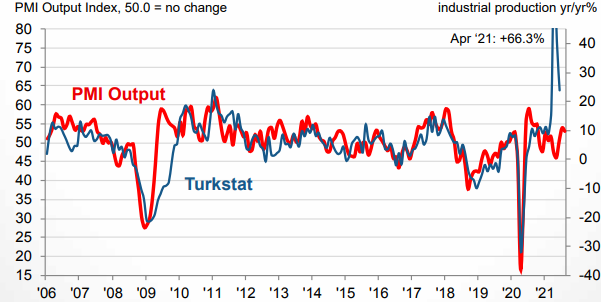 The latest PMI® survey signalled that the rebound following the loosening of COVID-19 restrictions continued in August with further solid improvements in output and new orders recorded. New export business increased particularly quickly. In order to keep on top of workloads, firms expanded their
purchasing activity and employment. Supply-chain disruption continued, however, contributing to
further rises in input costs and selling prices.

The headline PMI ticked up to 54.1 in August from 54.0 in July, signalling a solid improvement in the health of the manufacturing sector and one that was the most marked since January. Business conditions have now strengthened in three consecutive months.

Production expanded for the third successive month amid improving customer demand, with the aforementioned growth of new export orders helping to boost output in some cases. The rate of expandion was solid, albeit softer than that seen in July.

Sharper increases in both purchasing activity and employment were recorded as firms attempted to keep on top of workloads. The rise in employment was the fastest since January. Manufacturers were able to prevent a build-up of backlogs of work, which were broadly unchanged for the second month
running. Some respondents highlighted the need to expand workforce numbers.

Efforts to secure inputs continued to be hampered by supply-chain delays, which contributed to further sharp increases in input costs and output prices.

That said, inflationary pressures showed signs of easing during the month.

Stocks of both purchases and finished goods rose in August, the first expansions in 12 and 69 months respectively. Firms increased their pre-production inventories in line with higher new orders, and as
part of efforts to guard against supply shortages.

Meanwhile, difficulties making deliveries to customers were reportedly behind the accumulation
of stocks of finished goods.

“Despite the numerous challenges being faced by manufacturers at present, Turkish firms were able to sustain growth for a third successive month in August as client demand improved, while purchasing and employment were ramped up.

“Efforts to secure export sales were particularly successful, with international new business up sharply. Manufacturers therefore had to battle with the severe difficulties still afflicting transportation to get their goods out to customers. Firms will be hoping that some of these constraints start to ease over the course of the rest of the year so that their full growth potential can be realised.”