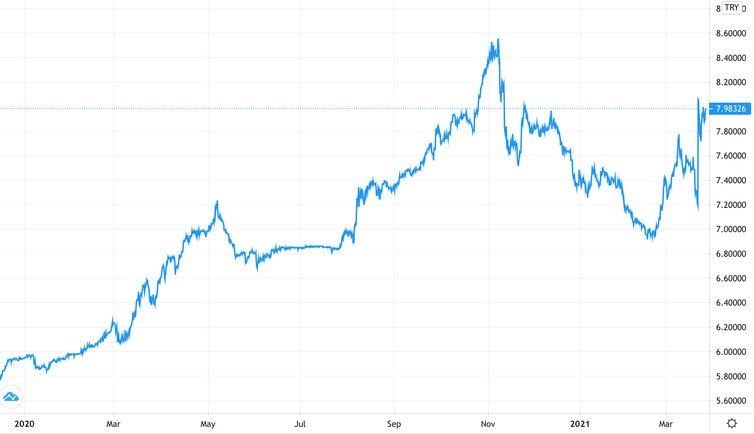 Dollar/TL is closing trading hours in Turkey on Thursday at around 7.95,  as MSCI Emerging Markets stock index fell as much as 0.9% on Thursday, its fifth day of declines and the longest losing streak in more than six months. The index extended its retreat from a record high in February to more than 10%, generally considered the threshold for a correction.  BIST-100 dropped 1.38%, as London dollar/TL swap rates remained in triple digits.  PA Turkey expects the TL to depreciate fester through April. Here are the reasons:

Turkey’s currency is facing perfect storm, as banks are on the verge of renewing $6.2 bn of maturing loans in the next 2 months and there is the threat of sanctions from US, while the dollar Index is flirting with 93.

Turkey could also face rating downgrades which would further limit her access to global credit markets.  After Fitch and S&P, Moody’s too commented on Turkey’s external position:

Credit rating agency Moody’s said on Thursday that the removal of the Turkish central bank governor is credit negative for banks’ funding as the move hurt investor confidence, constraining their access to market funding.

“Without central bank credibility, (banks’) market access is likely to again be costlier and limited to short-term syndications,” it said in a note.

Moody’s also said risks are somewhat mitigated as Turkish banks have adequate foreign-currency liquidity and have generally reduced their reliance on market funding since the currency crisis in 2018.

Turkish banks and corporates have $190 bn of FX debt rollovers in the next 12 months, some of which they would prefer to pay back, adding to the pressure on the currency.

While he has not given clues in that direction, there is almost a consensus expectation that the new CBRT governor Prof Kavcioglu will cut interest rates in the next Central Bank Monetary Policy meeting, scheduled for April, 15.

It is difficult to create a positive narrative for Turkish markets until after the Central Bank MPC meeting and possibly until 24 April, when American president Joe Biden is feared to recognize the so-called Armenian genocide, an issue hugely sentimental to Turkish citizens.

The Conversation commented on the outlook for TL:

This is not an easy time to be taking over the management of Turkey’s economy. As well as the high inflation and high interest rates, Turkish savers seem to have lost faith in the lira as their foreign currency holdings reached record levels in 2020. None of this bodes well for a country with a sizeable private and public debt of some US$440 billion owed to foreign creditors and mostly denominated in US dollars.

The new central bank governor is Şahap Kavcıoğlu. He is a former banker and a current professor of banking and finance. He is a columnist in a pro-government newspaper, which on its front page accused Naci Ağbal of a conspiracy against the Turkish economy a day before he was sacked.

Kavcıoğlu has written columns supporting Erdoğanomics, including its low interest rate low inflation theory. One can therefore easily understand why he has been appointed. We will probably see successive interest rate cuts starting from April when the central bank’s monetary policy committee gathers for its regular monthly meeting.

This will probably be followed by another economic boom fuelled by cheap credit alongside runaway inflation on the way to the second presidential election in 2023. Given the unsoundness of Erdoğanomics for an open economy like Turkey, we will probably also see new record lows for the lira along the way.

PA Turkey predicts faster TL depreciation next week, as the FX sales by residents, reported around $8 bn are very likely to end. These sales reflect profit taking behavior by a few high net worth individuals who had low-cost dollars, which are now being converted into TL deposits, before Prof Kavcioglu cuts rtes. The rest of FX deposits are here to stay, as along with economic confidence, trust in Turkstat’s inflation reporting is very low.