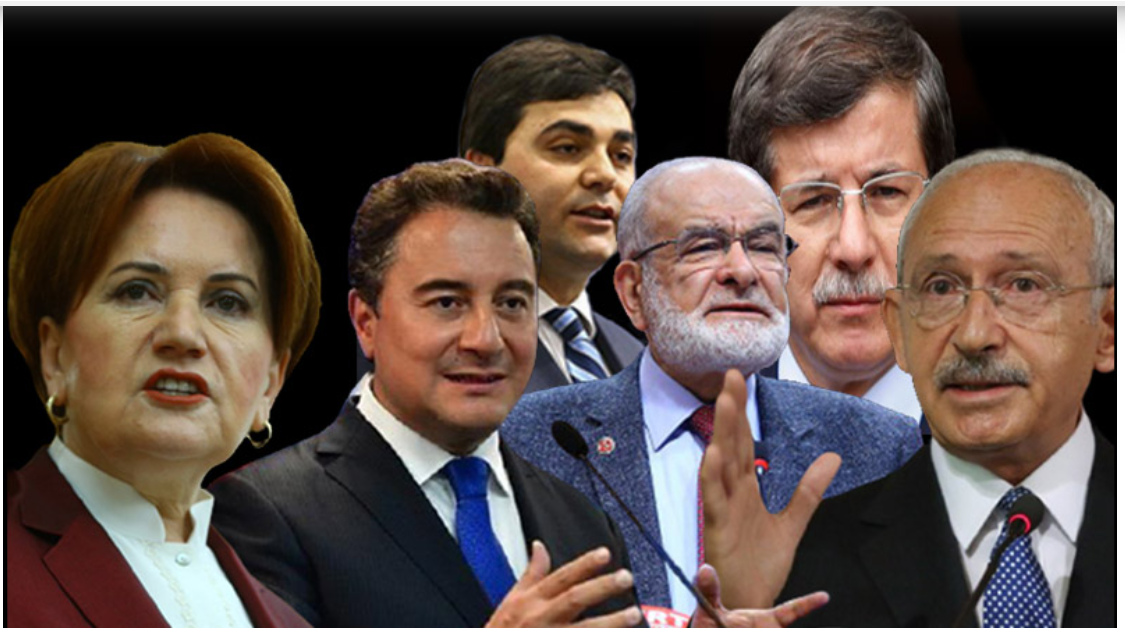 Six opposition parties, who teamed up to re-establish the parliamentary system of government in Turkey, have issued a joint declaration outlining 10 common principles and goals.  After their fourth summit, the leader issued their second declaration, which once again focused on re-democratization of Turkey.  The declaration further strengthens and clarifies the road map for a return to the parliamentary system, compared to the imperial presidential system, which makes Erdogan a strong man not bound by any rules or checks and balances.  The declaration was scorned by many pro-opposition  columnists for not addressing Turkey’s main problem, namely a slow-motion economic collapse and the attendant impoverishment of the middle class.

The document will be a reference source for the transition period and future joint efforts on country management, the leaders of the six parties said in a statement on Monday, 30 May,  reports Ahval News.

“As parties with different political traditions, we cooperated and collaborated to make our country a more peaceful, happier, prosperous, freer and democratic place, as we are stepping into the second century of our Republic. We will continue this cooperation until we achieve our goals with the support of our nation,” the leaders of the opposition parties said in a statement published on the main opposition Republican Peoples’ Party (CHP) website.

The six political parties, including the CHP, have built an alliance on a shared set of principles focused on abolishing a presidential system of government in Turkey that granted vast executive powers to President Recep Tayyip Erdoğan in 2018. The parties began the talks last year after opinion polls showed that Erdoğan and his Justice and Development Party (AKP) were suffering a decline in public support ahead of elections slated for June 2023.

The parties said they will continue to work and cooperate until the election results are finalised and announced by the country’s top electoral body, the Supreme Election Council (YSK).

“We will work day and night to ensure that not a single vote is wasted, and we will take every precaution to ensure that the elections were held in a fair, free, transparent and secure manner,” they said.

According to politics expert Murat Yetkin, the statement above does not mean cooperation will end if elections are won by the opposition. To the contrary news from the Nation Alliance front suggest informal discussion and significant progress towards a post-election coalition.

The common principles and goals of the six political bodies have been listed as: “Strengthened Parliamentary system based on separation of powers,” “Libertarian public order,” “Pluralist, participatory and libertarian democracy that will end all kinds of discrimination,” “Freedom of thought, expression and press,” “Freedom of religion and conscience,” “Social peace and accountability before impartial/independent judiciary,” “Production and employment oriented economy,” “Political ethics reform,” and “Effective and reputable foreign policy.”

While in political theory a strong democracy is viewed as an important prior condition to economic development, the detractors of the Nation Alliance point to AKP’S votes being stuck at 30% despite outlandishly poor economic management, claiming the absence of unified and feasible economic plan articulated by the opposition is the main reason for the resilience of AKP support.

The opposition may not have the luxury of dallying longer on uniting against a common economic platform and a presidential candidate, because there is a loud chatter among politics columnists that AKP-MHP are gearing up to call early election by November 2022.