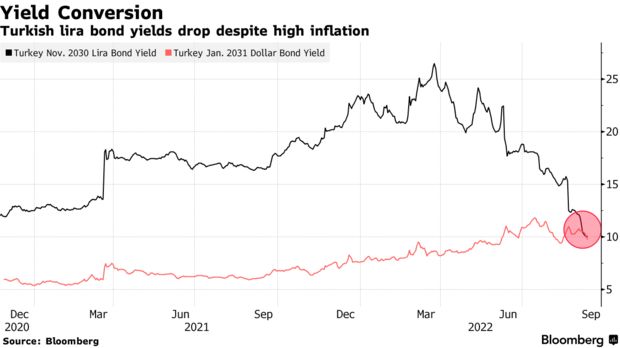 Turkish debt markets are becoming increasingly disconnected from economic reality as the government’s lira and dollar bonds trade at nearly the same yields.

It’s an oddity that doesn’t make sense when viewed through the lens of classic risk and reward. The lira is one of the world’s worst-performing currencies as Turkish inflation speeds past 80%, while the dollar enjoys the status of the ultimate safe haven.

As a result, the yield on lira-denominated notes due in November 2030 dropped as much as 13 basis points below the rate on the sovereign’s similar-maturity dollar bonds last week. In March, local yields were roughly 1,800 basis points higher.

“It’s an extremely rare situation for emerging markets in general, and the first time this has happened in Turkey,” said Emre Akcakmak, a senior consultant to East Capital, based in Dubai. “I wouldn’t expect this yield dynamic to be sustainable.”

The lira bond rally comes despite upward pressure on inflation and expectations the lira will weaken further. It also counters the trend with the junk-rated sovereign’s dollar debt, which has sold off this year — along with bonds of many other developing markets — amid risks to global and local economic growth prospects.

Foreign investors have largely exited from the country’s local bonds, meaning price movements there are driven by Turkish investors rushing to comply with new rules, regardless of economic fundamentals.

On Tuesday, the November 2030 lira bonds yielded about 29 basis points more than Turkey’s equivalent dollar notes. Other maturities have also seen an unprecedented conversion, with the extra yield on local bonds due in 2027 dropping to as little as 71 basis points above similar dollar notes last month, from 880 basis points in June.

The low-yield, high-inflation environment is the legacy of Erdogan’s unconventional economic beliefs. He says that low interest rates help curb consumer prices and has pressed policy makers into cutting official borrowing costs. However, the ultra-loose monetary policy has so far failed to halt inflation and contributed to the lira’s 27% weakening against the dollar this year.

Last month, the central bank released rules forcing banks to bring commercial loan rates closer to Turkey’s 13% benchmark policy rate, in an attempt to counter signs that the $830 billion economy might be slowing. Earlier, it forced lenders to buy lira bonds as requirements for collateral as well as bank reserves.

Such low rates on lira bonds may eventually lead to an outflow of foreign currency from Turkey as companies refinance hard-currency debt with local funding, according to Inanc Sozer, managing partner at Istanbul-based consultants Virtus Glocal.