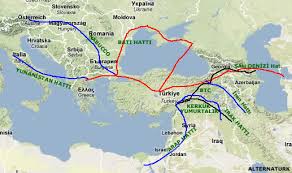 Turkey purchased too much NG, has little demand for energy and the renewables industry is taking off big time. To boot, most of Turkey’s NG purchases are based on long term contracts with fixed prices, or those indexed to crude oil in some fashion.   While prices paid by state-owned gird owner and wholesaler BOTAS is considered a ”state secret”, several independent reports suggest that Iran is the most expensive seller. Turkey found a novel solution to stop Iran gas deliveries without breaching the use-or-pay contract.

Iran’s Oil Minister Bijan Namdar Zanganeh on Monday blamed Turkey for not showing interest in repairing a gas pipeline near the Iranian border blown up by the Kurdistan Workers’ Party (PKK) in March.

“Iran offered to help repair the pipeline but the other side did not welcome it,” Zanganeh said while maintaining that the repair work would not have taken more than a few days.

The March 31 explosion in the pipeline which carried around 10 billion cubic meters of Iranian gas to Turkey annually brought Iranian gas exports to its neighbor to a halt. The pipeline had been targeted on Turkish soil by Kurdish fighters several times before.

People’s Defense Forces (HPG), a military wing of Kurdistan Workers’ Party (PKK), on April 1 claimed responsibility for blowing up the pipeline near the Bazargan border with Iran. According to the statement released by HPG, a fighter of the group attacked the Turkish forces guarding the pipeline and then blew herself up.

According to official statistics announced by Turkey, Iran exported 7.7 billion cubic meters of gas to Turkey in 2019, much less than in previous years.

Turkey was among major importers of Iran’s gas and one of its top trading partners but due to the U.S. sanctions re-introduced by President Donald Trump in May 2018, the volume of trade between the two countries has sharply dropped.

Washington withdrew from the Joint Comprehensive Plan of Action (JCPOA) or Tehran’s nuclear deal with world powers in May 2018, and a year later, stopped renewing its waivers for the major Iranian oil buyers, including Turkey.

Iran’s non-oil exports have also suffered hugely since the breakout of coronavirus in February. According to the Iranian Customs Administration, the total volume of Iran’s exports and imports in April was reduced by 27 percent compared to the same month last year and reached to a little over $3.5 billion.

Excerpt only, to read the full article, click here