The latest PMI® survey data from Istanbul Chamber of Industry and IHS Markit showed that the manufacturing sector was negatively impacted by the COVID-19 lockdown that was in place for much of May. Output and new orders slowed, while the rate of job creation softened to a one-year low.

There were further reports of difficulties securing raw materials, meanwhile, which contributed to sharper increases in input costs and selling prices. 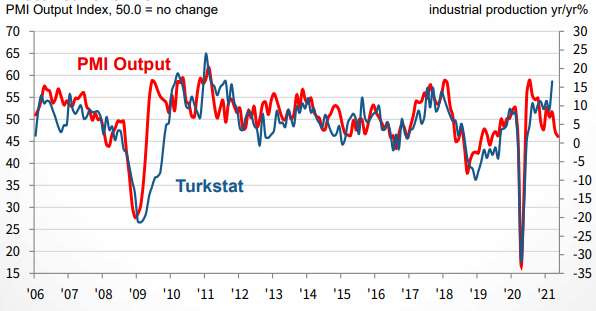 The headline PMI registered 49.3 in May, down from 50.4 in April and below the 50.0 no-change mark for the first time in a year. That said, the moderation in business conditions signalled by the PMI was only marginal.

The COVID-19 lockdown, and associated softening of client demand, led to moderations in both output
and new orders during May. Although more marked than in April, the respective rates of easing were
much less pronounced than during the first wave of the pandemic last year. New export orders also
slowed, ending a four-month sequence of growth.

Manufacturers continued to raise their workforce numbers midway through the second quarter, but
hiring was also impacted by COVID-19 restrictions.

As a result, the rate of job creation eased to the weakest in the current 12-month sequence of rising
employment.

Supply-chain disruption was again a feature of the latest survey, as highlighted by a marked lengthening of vendor delivery times.

Difficulties securing raw materials often led to increases in their prices. Input costs rose sharply
again in May, and at a slightly faster pace than in the previous month. Currency weakness was also
reportedly a factor behind higher input costs.

In turn, firms raised their own selling prices, and at a steep pace that was the strongest in the year-todate.

Purchasing activity was scaled back marginally, and stocks of purchases also moderated, in part due to difficulties securing materials.

“It is of little surprise that the COVID-19 lockdown restrictions that were in place for much of May had
a detrimental effect on the Turkish manufacturing sector over the course of the month. Firms will be
hoping that the lockdown had the desired effect in bringing infections under control, and that a swift
return to growth will be seen now that measures have started to ease.”

“Less transitory seem to be the problems in supply chains, which remained widespread in May and
contributed to strong inflationary pressures.”